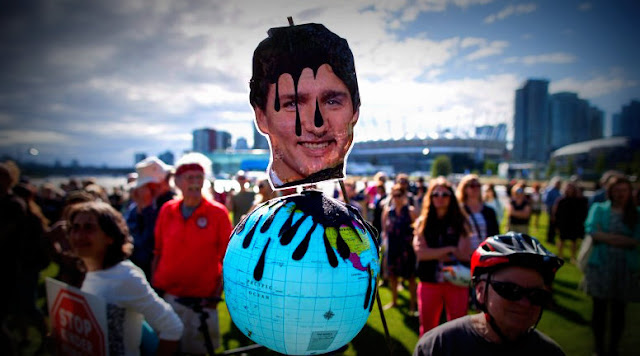 Although Justin Trudeau is doing more to fight climate change than any other Prime Minister in Canadian history, a lot of Canadians think he could be doing more.

And while that's true, he's not perfect and we should all be doing more.

Far too many are unaware of how much the Trudeau government is already doing.

Thanks to the toxic Trudeau haters who try to make it all about a pipeline... 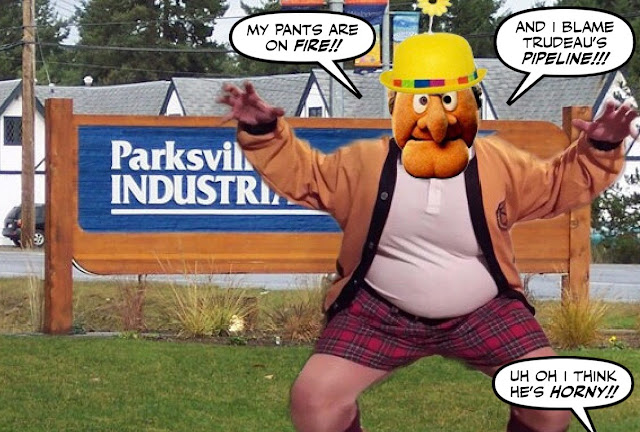 Even though the question of how Canada is doing is, as I have pointed out many times, far more complicated.

Mark Jaccard, a professor in the School of Resource and Environmental Management at Vancouver’s Simon Fraser University who has contributed to assessments from the Intergovernmental Panel on Climate Change (IPCC), says that Canada’s record on climate change is more complex and productive than most people realize.

“It seems to me people get so focussed on the Trans Mountain pipeline as a symbol that the federal government has failed on climate policy, without paying attention to the actual policies and comparing them to the rest of the world,” he told The Tyee. “When you do that, we’re among the leaders.”

The carbon tax that the Cons are always attacking is both ambitious...

Earlier this spring, Canada officially enacted a national price on carbon emissions, which the New York Times refers to as “one of the most ambitious carbon pricing programs in the world.”

From an Australian point of view, the decision to enact a nation-wide minimum carbon price that the Canadian government took looked very courageous,” Jotzo said, “recognizing the fact that some of Canada’s provinces are very fossil fuel intensive.”

Considering the sinister forces Trudeau government is forced to fight.

Earlier this month, the Globe and Mail revealed that Scheer had a secret meeting with Calgary oil executives about how to dismantle Trudeau’s environmental policies. Meanwhile, anti-carbon price groups like the Canadian Taxpayers Federation have studied Australia’s repeal campaign.

And it's too bad so many Canadians have no idea how many other things the government is doing to fight climate change here...

Putting a price on pollution is the most affordable and effective way to cut pollution, and it's part of any credible climate plan. We're also phasing out coal, protecting our oceans, making investments in clean technology and public transportation, and much more. pic.twitter.com/vHdHAmC0yK
— Catherine McKenna 🇨🇦 (@cathmckenna) May 13, 2019


And all over the world.

Unbeknownst to most Canadians, the federal Liberals are also leading a global effort to transition the world off of the dirtiest and most damaging of fossil fuels: coal.

So yes, let's strive to do better, pressure the government to do more.

But let's not be too hard on ourselves, that's so old Canadian and so pathetic.

Let's encourage Canadians rather than discourage them.

And above all let's never forget that in the end the choice of who will be prime minister will come down to this one: 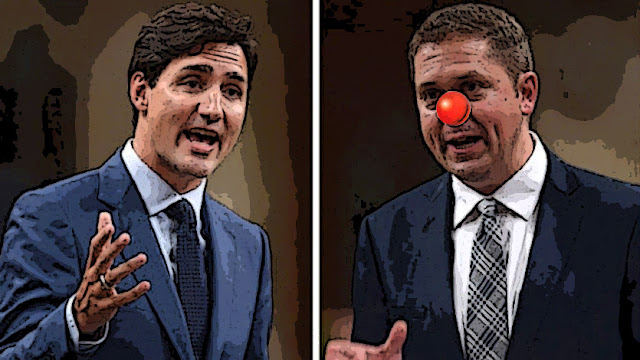 The choice between a real Canadian leader who is at least taking us in the right direction.

Or a Con clown who would torch the planet to please his Big Oil masters in America.

So choose carefully for this is the Apocalypse Election.

And we may never get another chance to save our country and our world...

"Unbeknownst" because the Con garbage media won't give it the airtime it deserves, preferring instead to focus on manufactured "scandals" and petty complaints. They won't give the Liberals any credit for what they are doing already, because they have a mandate to attack the star candidate -- and clearly have a personal hatred of Justin Trudeau. Derangement syndrome is a helluva drug. I just hope Canada doesn't overdose on it like we did here.

Thanks to our garbage media you never hear about all the ways the Trudeau government is fighting climate change. They are allowing the Cons to run anti-carbon tax ads without ever mentioning the rebate we will be getting. I strongly suspect that the oil companies are paying the media under the table for favourable coverage.

Then if people with tunnel-vision are going to obsess about the damn pipeline to the exclusion of all else, Trudeau should "postpone" it and put the ball in Kenney's court as some have been lobbying him to do. Kenney scraps Notley's bargain, he gets nothing for Christmas. No plan, no pipe. Forget about "atoning" for the NEP. There's nothing to "atone" for anyway. Norway implemented it to great success, but Alberta just whines and whines and whines and won't take advice from those "commie socialists" anyway. A Trudeau could cure cancer and they'd complain about oncologists being put out of work.

I've thought for awhile now that the Yankee and maybe British oligarchs sabotaged the 1979 election. Too much of a coincidence in who came to power in both the US and UK a year later. Uncle $cam never liked Pierre and sure doesn't like Justin either. Add to the mix now that Trump's boss Putin wants control of the Arctic, and you're looking at some really bloodthirsty sharks in the water. The M$M are complicit propagandists. Fuck them to hell.

The federal government can only do so much and they've made a good start. A carbon tax is how to get people to stop using things which create carbon. taxes are how we got a lot of people to quite smoking. taxed so much people decided they didn't want to spend the money. it was all a start, buy people have to do their part. its not hard. park the vehicle one day a week. don't buy so much and that especially means all those techie toys. you don't need new cell phones, tv.s etc every time one comes out. buy local, vacation local, live in smaller houses 2 people don't need 3 bathrooms. grow some veggies instead of having a front lawn. drag a mug around instead of using disposables all the time.

the odd time I go to macdonalds, food is wrapped in paper and cardboard. why can't grocery store do that. why is everything in plastic?

Better yet - if you live in an urban area and can get to work by public transport, cycling and walking (in my case usually working in my home office) - don't have your own car and use carshare schemes. Those schemes (paradoxically) make it possible to run errands that would be difficult without a motor vehicle, but using motor vehicles less.

Another help that requires government intervention is more passenger rail - it isn't so evil to travel to a different region if you do it by rail. We need passenger routes with their own tracks, and some major abandoned ones (think of the southern Prairie route) should be restored to service.

The Dutch do most things so well, but there are some huge bloopers, as everywhere. Albert Heijn (AH) their largest supermarket chain, has far more foods in single portions and transparent plastic clamshells than I usually see here, and a Danish friend working in Amsterdam said the same.

I'd love to grow veggies on our wee table-sized lawns, but there are simply too many people walking their dogs. Most do scoop the shit, but the pee is very pungent. And we don't have enough sun in the back gardens.

Thanks for this great post, Simon. Some people would have you believe that climate change is a black and white issue. It's much more complicated that that. Trudeau's failing is the he does not do enough to promote what they have been doing - on this file, and others. Of course, the M$M isn't of any help. I was actually surprised to see The Tyee publish an article like that.