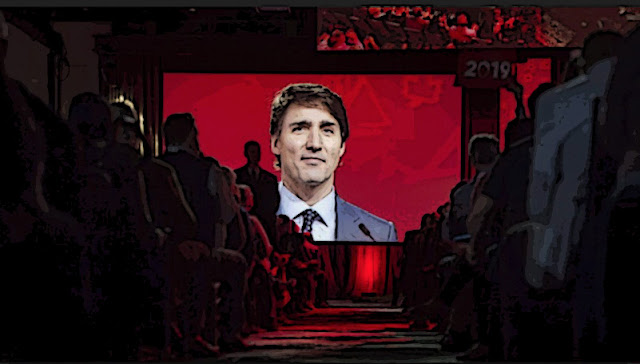 When Justin Trudeau took over the Liberal Party he got rid of a lot of dead wood. The good old boys who had turned the party into a private club.

The ones who spent more time fighting each other than they did fighting the Cons, and have spent most of the time since they were bounced plotting to overthrow Trudeau.

With some of those ghastly old boys apparently having now decided that the man to replace him should be Mark Carney, the Governor of the Bank of England. 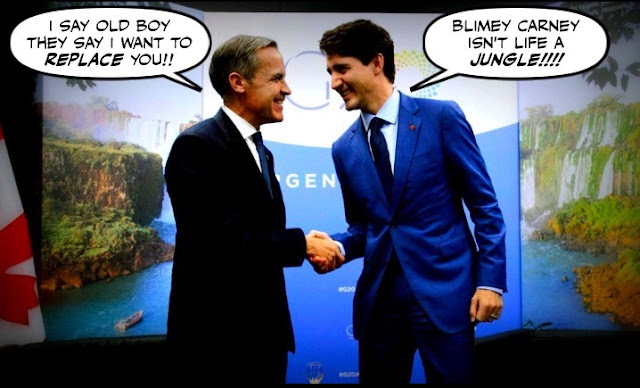 At least according to Chantal Hébert.

With a possible Liberal defeat this fall in mind, some insiders are already strategizing a path to the party leadership for former Bank of Canada governor Mark Carney.

Who claims that the good old boys are looking to go back to the future.

Carney now occupies a place in the imaginary firmament of some Liberal insiders once reserved for Michael Ignatieff and, before him, Paul Martin.

That the first turned out to be a shooting star and the second lost his shine once in office is unlikely to deter self-appointed Liberal headhunters from combing the galaxy for the party’s next saviour.

And although the new Liberal management is denying that story.

Liberals are dismissing a report that party insiders are plotting a successor to Prime Minister Justin Trudeau should the party falter in October’s election, calling the move “totally ridiculous,” “dopey” and “boneheaded.”

That hasn't stopped many old toxic Trudeau haters from jumping on the supposed Carney bandwagon.

Or at least jumping up and down on one foot, jingling the change in their pockets, and shouting "Oompah, oompah, oompah!!!!"

With even the notorious Trudeau hater the Disaffected Liberace apparently so impressed with Carney...

He's ready to give up on the Green Party, and become a Liberal again!!!! 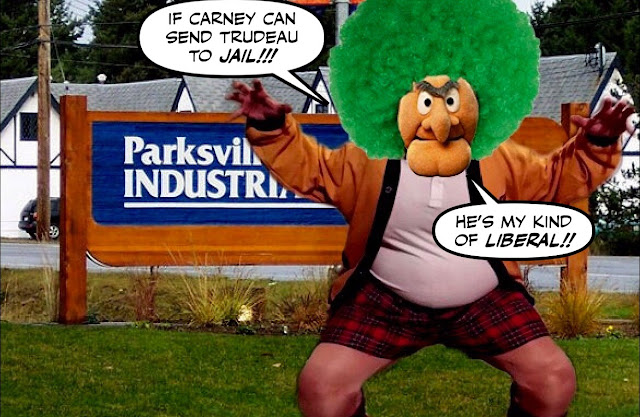 But sadly for him and all those old Liberal "insiders" and our useless media, they all seem to have overlooked this little detail.

Mark Carney became a British citizen on Wednesday, fulfilling a promise made when he accepted the job of Bank of England governor in 2012.

At least judging by what happened to Michael Ignatieff...

And the Liberal Party needs another Iggy debacle like they need a hole in the head.

Especially since their present leader is more than a match for the goof Andrew Scheer... 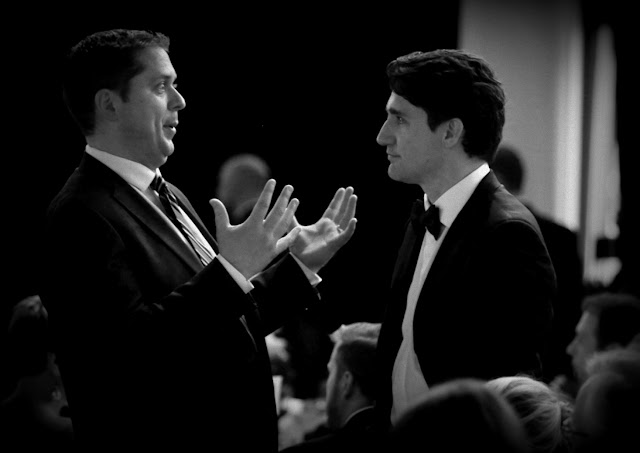 He could still easily win the next election, and even a new majority.

And should the time come when Justin Trudeau steps down, and needs to be replaced, those who choose his successor should be the new generation, not those good old boys.

Who would do us all a favour if they could, in the future, hold their back to the future discussions, in a more suitable location... 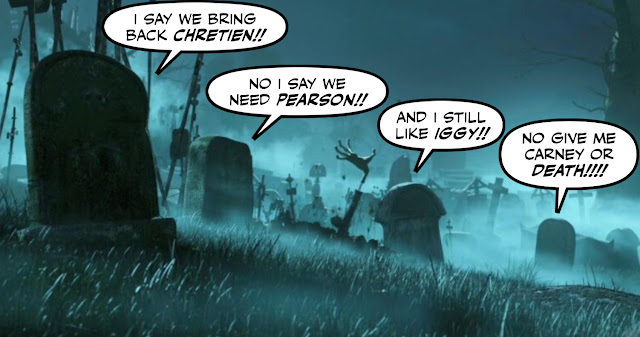 A banker? How fucking disgraceful! You know, after reading Common Ground, somehow I got the feeling that there would be a lot of bitter people holding a grudge against Justin because they weren't on board with his project for a fresher and especially more diverse approach. No surprise, then, that the old guard won't let him come up for air. They probably always saw him as a nepotism hire and someone who posed a threat to their old boys' club. Read between the lines of his NYT interview and you'll see hints about the knives coming out:

One of the things I don’t regret, even though a lot of people criticized me for it, is having taken as much time as I did to get to an eventual decision.

I talked to a number of my predecessors from different parties who expressed how quickly they would turf out of caucus someone who was so openly antagonistic. ... Old-school politics would have been to say: “O.K., I’m going [to] show strength as a leader, make a decision and move on.”

But I really believed that doing politics differently means trying to reconcile differences and trying to hold together people who do agree on the big things.

A mediator rather than a dictator, how quaint. But he's not "old-school politics" so they want him out in favor of someone dirtier and more authoritarian because he really is that NICE. I really do blame the Liberals in a big part for Justin's misfortunes. Self-fulfilling prophecy that he warned some of the more desperate party operatives about, but did they listen? No, they drafted him like Michael Corleone and then chewed him up and spit him out. I wonder if Kinsellout is behind this trial balloon like he had his dirty fingers in Gropergate and now the weird sisters' curse. Vendu! Vendu!

One thing is for certain, if their Game of Latrine Thrones plot results with a Pyrrhic (Con) victory in October and Justin Snow gets forced out, they'll be apoplectic if someone like Chrystia Freeland or especially Bardish Chagger succeeds him. (Hey, if I was a citizen I'd even vote for a Sophie Gregoire Rodham-Clinton...) The other guarantee, of course, is that none of them are going to like what Mr. Nice Guy has to say about the backstabbers in his eventual second book.

I don't disagree that if the Liberals want to win this fall, Junior needs to volunteer to step aside.
The best choice for a replacement? Chrystia Freeland.

I can only agree that Last Name Derangement Syndrome (cf. PTSD or "Pierre Trudeau Stress Disorder") is unfortunately a thing in Canada like it was for Hillary Clinton down here. Rather than focus on issues or accomplishments, the ratings-starved media and dirty-tricks Cons obsessively attack the person with fake scandals and conspiracy theories. Or in this case, backroom undermining from within.

Now, I like Freeland, and so far she seems to be the one most commonly thought of as Trudeau's eventual successor whenever that time may come. Yes, besides being prime minister he is well-known as the son of Pierre Trudeau, and Pierre does happen to be one of his middle names. But anyone who calls Justin Trudeau -- 47 years old, a married father of three, a K-12 educator in a multitude of subjects who holds two postsecondary degrees, and a distinguished and compassionate public servant and advocate for numerous charitable causes whose life calling is to better his country and the world -- a dismissive, petty and childish nickname like "Junior" sounds like they're concern trolling in bad faith. Do you also refer to the former First Lady turned Secretary of the State of the United States as "Bill's wife"?

There are four old guard liberals on this site, whining and complaining about their loss of status in the party. Their track record reads: Turner,Martin,Dion, Ignatief. Sucess indeed.

In 2015, the old Liberal backroom boys ( and they're mostly old boys ) had driven the party down to third place with 34 seats. Now that Trudeau has restored the party fortunes, t6hey want Trudeau out so they can take their rightful places and manage the party into oblivion once again.

There are four old guard liberals on this site, whining and complaining about their loss of status in the party. Their track record reads: Turner,Martin,Dion, Ignatief. Sucess indeed.

Add Warren with his obsessive axe to grind for a dishonorable mention. The damage that his antics have done to the party and the country over his stalker grudge against one man is incalculable.

Dave the pig porker in the UK has just joined an American tech firm working on Skynet. Nick Clegg sits on the board at the ideological munitions factory that is Facebook. In a much more respectable capacity, the Clintons and Obamas have signed on to start their own respective production outfits with Netflix. Al Gore does his documentaries about the #1 existential crisis facing humanity that humanity nevertheless doesn't seem to care about. If Justin does get run out on a rail by his worst enemies, there's a good chance he'll find some success in the private sector. Maybe he'll join Sacha's studio and the brothers will sign a deal with Netflix Canada. Or he'll just retire from the ungovernable shitshow and go back to teaching like he said he wanted to do. Nevertheless it's a shame, because public life is where his heart is, and most importantly that the real loser would be the 35M+ Canadians who'd have to suffer under the Con cult while the NDP and Greens wallow in irrelevance and the Liberal brass seems intent on joining them there. Aided and abetted by an old-boy media network that never gave him a fighting chance.

The selfish gits afflicted with derangement syndrome and tunnel vision are either oblivious to this fact or just don't give a damn. Nobody voted for this poor man's Brexit power grab. The one thing Trudeau wanted to change was people being cynical enough about politics that they don't bother to vote, and yet that's exactly what the establishment guard and other self-interested players who shall not be mentioned seem intent to do. Really, what a shame. What a tragedy indeed.

Many of us think that Canada's foreign policy has gone waaaay of track. Chrystia Freeland and Global Affairs should move to Langley Virginia so they can bike to work.
A suitable replacement to get the Liberals back on track; to regain the moral high ground.
Jody Raybold Wilson ( My darlin')!

Mark Carney became a British citizen on Wednesday, fulfilling a promise made when he accepted the job of Bank of England governor in 2012.

If you check Simon, you probably have UK and Canadian citizenship.

There has been something of a joke for years that if a Canadian takes US citizenship they surrender their Canadian passport. The US State Department returns to the Canadian Gov't who promptly mail it back to the passport holder.

There is not enough facepalm in the universe to fit a proper reaction to this comment. Your darlin' (Seriously? And people say Trudeau's supporters are fanatical groupies) Judge Jody the Executioner is a toxic, narcissistic, grandstanding backstabber with a radical manifesto in her arsenal and an ego the size of the Death Star. A spoiled-brat daddy's girl who sold out her party and her country not for 30 pieces of silver, but 15 minutes of infamy and a failed attempt at a Chretien-Martin coup. Veruca Salt had a golden ticket of opportunity, but she tried to take over the chocolate factory and now, she gets nothing! Nothing!

She had her own agenda to push to the exclusion of all else and couldn't admit that she had been promoted to the level of her own incompetence, so she bullied everyone in cabinet including the prime minister, because she wanted to play pretend prime minister without being prime minister until someone figured out a way she could ultimately depose the prime minister. The prime minister refused to budge, and her plan backfired, which means her arsonist temper tantrum is likely to burn a beautiful big house of 36 million people to the ground while framing Trudeau as the one holding the gas can and match. (And yes, I am using the word "burn" and referencing pyromaniacs metaphorically.)

She also appears to be an unofficial (?) "client" or "associate" of a certain washed-up punk rocker and old-guard Blue Grit with a similarly inflated sense of self-importance and a predilection for Chicago-style dirty-tricks politics, who himself has been looking for a way to not only depose but publicly humiliate and disgrace the prime minister. Jody's "darling" Svengali has had Trudeau in the crosshairs ever since Trudeau told said aging garage-band hack that he had no intentions of being Richard Daley as PM, and so he should take his poor man's Roger Stone act, go on the road and get lost. But following similar logic, I suppose the Democrats should nominate James Comey and Julian Assange as their ticket for 2020. The gospel of Judas, yeah, way to regain the moral high ground.

But not a peep about Chrystia and the disaster that is Global Affairs Canada??
Your high moral ground is built on quicksand.