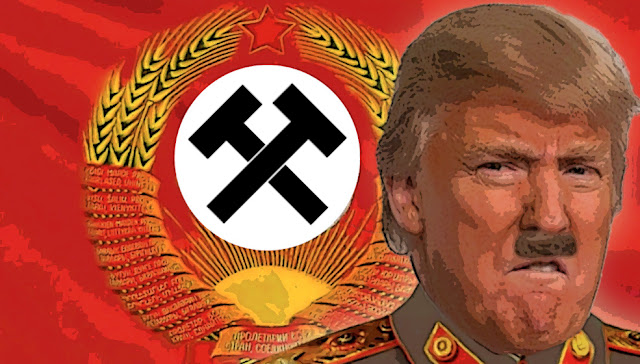 I suppose it was inevitable, and nobody should be surprised.

When you have a bloated authoritarian would be dictator like Donald Trump in the White House.

One who needs to be told how great he is every day of the year, it was only a matter of time.

Sooner or later he was going to want a parade. 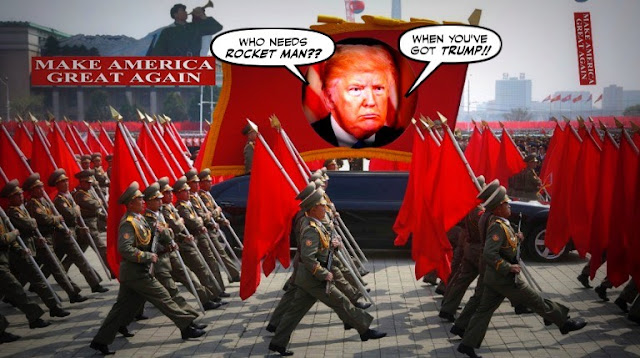 Of one kind or the other... 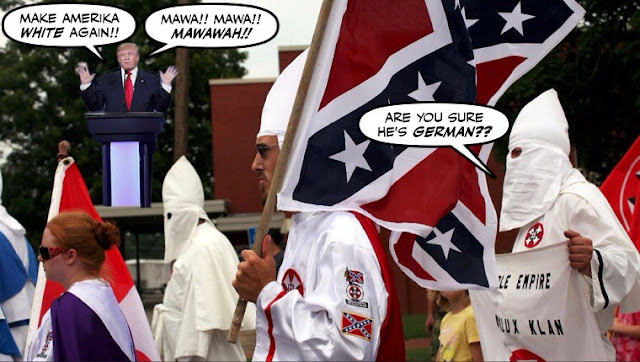 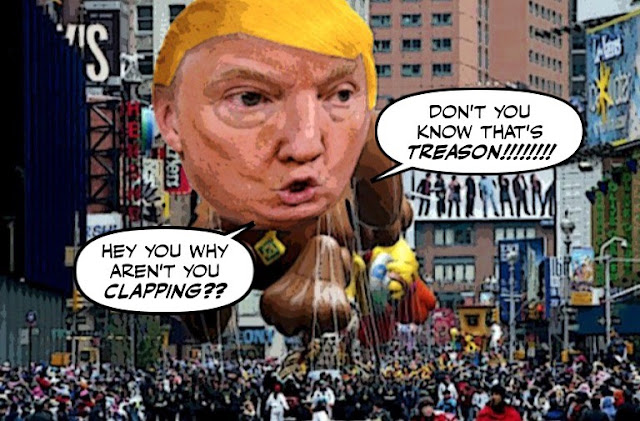 But as the Washington Post's Dana Milbank points out, Trump doesn't really need a parade, he needs a Roman Triumph.

The triumph was a public ceremony, including a parade, to celebrate as a near-deity the emperor or a triumphant general — complete with laurels, thrown flowers, adoring troops, war spoils and vanquished enemies in chains. It is, in short, just the sort of parade Trump would enjoy if done in his honor.

For surely nobody can deny that this kind of ghastly spectacle has Trump written all over it.

First in the Roman triumph procession were the magistrates and members of the Senate; first in the Trump triumph would come Devin Nunes, Paul Ryan, Mitch McConnell, Tom Cotton and the other magistrates supportive of Trump. Next in the Roman triumph came the spoils of war: gold and silver, treasures, and paintings and carvings showing moments from the conflict. In Trump’s triumph, the spoils would include models of Trump hotel and golf properties, the nuclear football, a float with a very large button, and chunks of the border wall, carried by Mexicans.

And nothing would please America's mad emperor more than this bloody climax. 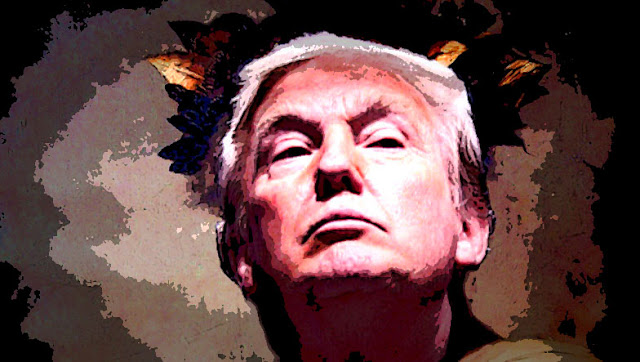 Next in the Roman triumph, to the crowd’s jeers, came the captured prisoners in chains: leaders, soldiers and sometimes family members, to be put on display after the parade or executed. Trump’s triumph would feature all his foes, in irons: the “dreamers,” NFL players who kneel for the national anthem, women who alleged sexual misconduct by Trump, the fake-news media, Robert Mueller, James Comey, FBI agents, Puerto Ricans, Trump’s primary opponents, Hillary Clinton, Steve Bannon.

But sadly for Trump most Americans don't see him as a conquering hero, or a new Patton as he sees himself.

They see him as an absurd clown, albeit a dangerous one.

And as CNN's Jeanne Moos reports, many are already lining up to rain on his parade...

And no that wasn't an illusion.

But yes, this is as true today as it was yesterday, and will be tomorrow.

Nobody will be safe, until this fascist hog, this porky Caesar, is driven from power. 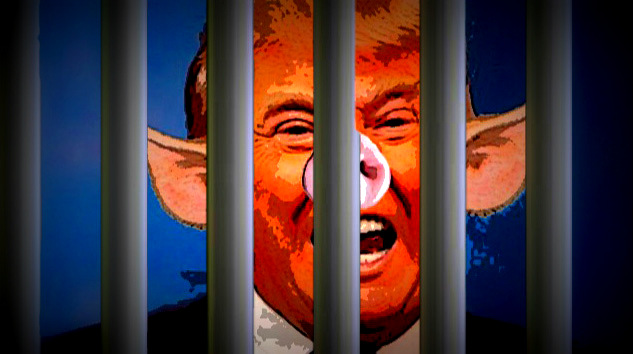 Labels: Donald Trump, fascism, The Madness of Trump, The Rise and Fall of the Orange Oaf

Kim Jong Don's evolution seems only fitting that he'd want a parade to celebrate...himself...and, oh yeah, the military. I think a more appropriate parade for Kim Don would involve clowns, lots of clowns and their silly, stupid antics.
Simon, did you notice at the end of the clip, the back of Trump's wind blown head revealed a bizarre, creepy semi-baldness reminiscent of a baby orangutan?

I love those different versions of parades our dictator could take part in. It's incredible how needy that dotard is, with his hair problems being a metaphor for the man himself. He's a total fraud, and I predict that when Mueller indicts him and his family, his meltdown will be epic.

Maybe the Canadian Olympic team should march with the Korean one. After all, just like Seoul, Ottawa knows now what it's like to share a border with a psychotic, nuclear-capable authoritarian megalomaniac who's dangerously close to the "button" and has the capability to completely nuke all life on the planet. They might not be official sister cities, but they've certainly got quite a bit in common.

And to think there are idiots having a biglier fit about "personkind," when that's exactly what the maniac would entirely destroy if he doesn't get his way. Get a brain, nonos...

Wonder if Trump is infected with the Toxoplasma gondii parasite? It would be a fascinating study to screen all of the Repubs and Dems for the parasite as well as the size of their Amygdala to see if there is any significant difference between the two groups and what options are available for emergency treatment. Kim UN who suffers from the same conditions has decided the BoneSpur warrior is hopelessly infected and is preparing to treat the sickness with neurotoxins and targeted doses of radiation. Once the I am a genius "bloody nose" resolution comes into play the best peoplekind can hope for is that both Trump and Kim are surgically precise. Trump has dumb might on his side but Kim has a significant amount of frugal stealth. Something Trump never learned while gaming the US legal system.
RT

Hi JD...I agree, Trump's parade must include lots of clowns, because if it doesn't he's going to look like Hitler or Goering. That absurd narcissist seems to have no idea what most of the U.S. and the world would think of a military parade, for no good reason. But the good news is that according to a survey in the Military Times most soldiers think the parade is a bad idea, and so judging from the comments do many Breitbart readers. And thanks for the baby orangutan reference. I knew it reminded me of something....😉

Hi anon@3:54PM...thanks I made another couple of versions of parades I thought Trump might take part in, but one wasn't very good and the other was X-rated. 😀
But I think you're about the metaphor. The man is desperately needy and a total fraud, and I too believe that when Mueller knocks on the door Trump will have a nervous breakdown...

Hi anon@5:26...you may be right. There is growing evidence that Trump's massive tax cuts may have overheated the U.S.economy, which will cause interest rates to rise, and trigger another housing crisis. Trump they claimed was an economic genius, until they realized he wasn't. But by then the damage was done, it was too late, and that trillion dollar deficit brought down the whole house....

hi Jackie...actually I'm really looking forward to seeing the two Koreas march in together. So wouldn't want the Canadians to get in the way of that moving spectacle. Specially since it will drive Trump and his stooge Spence who is at the games absolutely crazy. But yes, as you point out, we Canucks find ourselves in an enviable position these days. Sitting on top of a country bristling with nuclear weapons with a maniac as a leader. I love my American neighbours, but only as long as they don't kill us... ;)

Hi RT...well now you're talking my language. I suggest that an extreme colonoscopy followed by a radical biopsy be performed on Trump right way. And hold the anaesthetic, we can't afford to put his fear gland to sleep lest he appear more courageous than he really is. However if this insanity continues for much longer, I may need some emergency treatment myself... ;)

Video: Does Trump Have a Future in Hair Commercials?
https://www.thecut.com/2018/02/does-trump-have-a-future-in-hair-commercials.html

Donald Trump’s Hair Illusion Came Undone and We All Missed It
http://nymag.com/daily/intelligencer/2018/02/trumps-hair-illusion-came-undone-and-we-all-missed-it.html

They need to consult another dear leader Steven Harper about controlling their mangy manes. Harper's helmet hair could withstand a meteor strike thanks to all the gunk he had in it. If I could only remember his secret, I think it's 3 parts sand, 1 part cement.
JD