Colten Boushie and the Ghastly Silence of the Cons 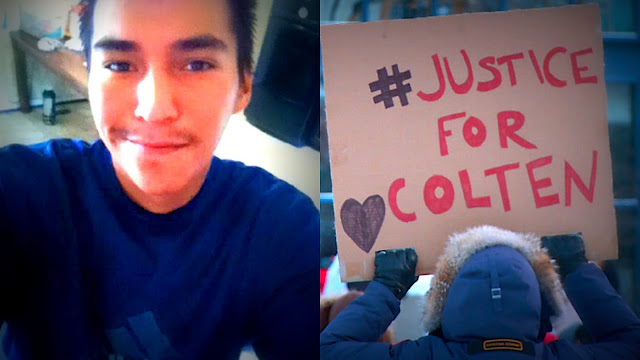 It's now been several days since an all-white jury found a white farmer in Saskatchewan not guilty of anything in the killing of Colten Boushie.

And since then there have been demonstrations of sorrow and anger all over this country.

So I was really glad to see that Boushie's grief stricken family was able to meet with Justin Trudeau yesterday. 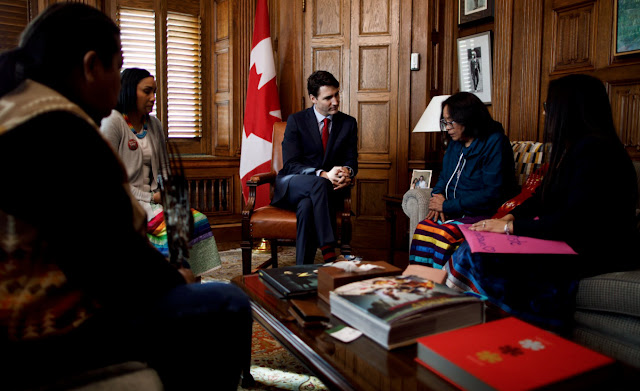 I was impressed by their courage, and their dignity, and encouraged by what Colten's mother had to say after the meeting was over.

Colten Boushie's mother met with Prime Minister Justin Trudeau on Tuesday and emerged optimistic that the Liberal government will address the concerns she raised about the judicial process that ended in an acquittal for the man accused of killing her son.

And by what Debbie Baptiste had to say about the way Trudeau handled that meeting. 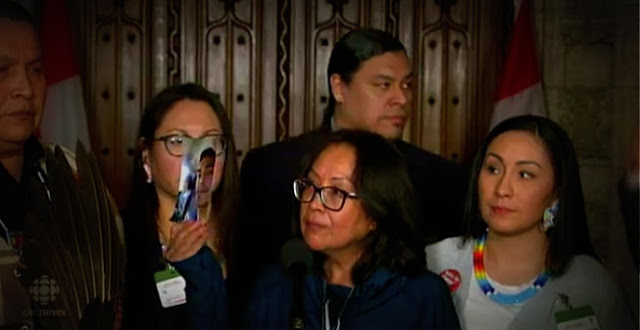 She said Mr. Trudeau greeted her by name and embraced her, and when they sat down, she told him about her son and what kind of person he was. And then she told the story of what her family has been through since the night he died.

She said Mr. Trudeau told her: "'Things need to change. Colten's death was not in vain and we will move forward.'

For while lawyers can debate whether Trudeau and his Justice Minister Jody Wilson-Raybould were right or wrong to tweet about the verdict.

I believe that lawyer Manjot Hallen is right about those tweets:

I think they were appropriate under the circumstances. Neither the prime minister nor the attorney general challenged the verdict and/or the findings of the jury. Rather, they identified a concern about the process and began a long overdue discussion about improving our justice system.

And even more importantly, I don't think Trudeau had any choice but to send out a message of sympathy to all the aboriginal people of this country, who were hurting and needed to hear that from their government.

For Trudeau has promised them and all their young people like Colten Boushie's brother a better future... 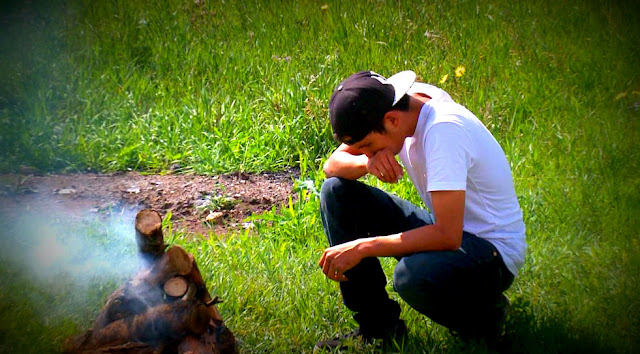 Which is why this bothers me so much... 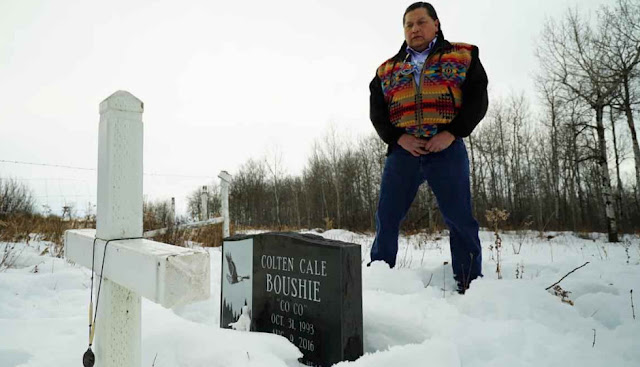 And nothing makes that more obvious than the silence of their ghastly leader Andrew Scheer.

Who even though he is from Saskatchewan, hasn't demonstrated an ounce of empathy, or bothered to reach out to even the First Nation's people who live in that province.

Which to me sends out this message: 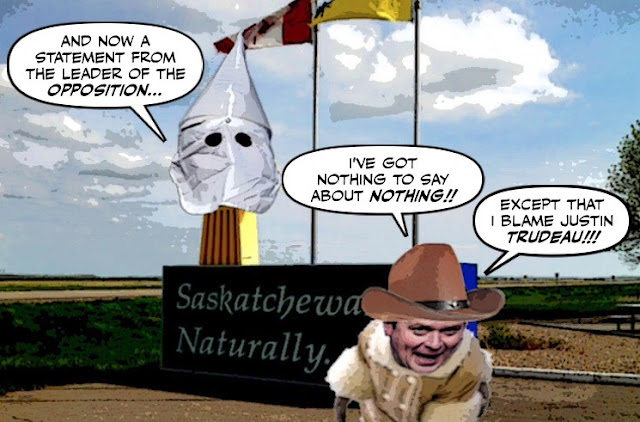 And makes it only too clear, once again, that he is and always will be, unfit to be the leader of this country.

Canada's indigenous people deserve a leader they can look up to and trust... 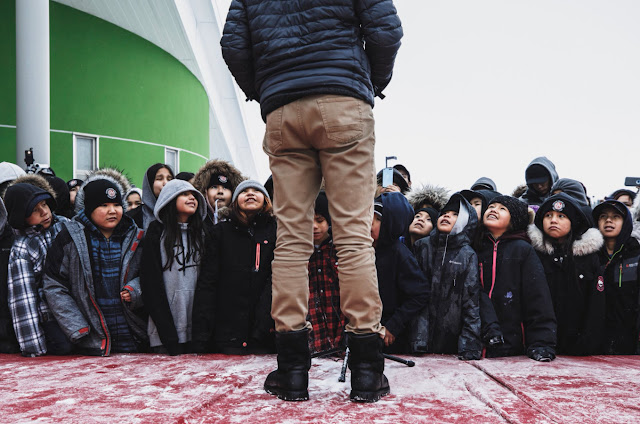 And thank goodness that in a time of sorrow and anger like this one.

Of course they're silent Simon for fear of upsetting their base. As well, their assertion that judicial interference is another reason for their silence is hypocrisy at the highest level.
Remember Emperor Harper and his court jester Dumbo Mackay attacking the honorable chief justice of the supreme court? That was okay I guess and this isn't? Hypocrites.
Kudos to JT for taking the time to console this grieving family and shame on Saskatchewan for allowing this redneck to get away with murder.
JD

Alienating everyone who isn't a (rich) heterosexual WASP guy or conservative white Catholic male is really great strategy, isn't it Herr Andrew? Because it's 1933? Or is it 1833, and his middle name is Andrew Jackson Scheer, with Ezra Levant his fowl-mouthed pet parrot squawking ad infinitum ("AWK! AWK! Aga Khan! Aga Khan! Chaka Khan! Chaka Khan!"), while Old Sickory remains silent and implicitly endorses Indians being massacred in his own backyard?

Then the cons came for the LGBT people,
And Andrew Scheer did not speak out because he was not an LGBT person.

Then the cons came for the feminists,
And Andrew Scheer did not speak out because he was not a feminist.

Then the cons came for the Muslims,
And Andrew Scheer did not speak out because he was not a Muslim.

Then the cons came for the Millennials,
And Andrew Scheer did not speak out because he was not a Millennial.

Then the cons came for the First Nations,
And Andrew Scheer did not speak out because he was not First Nations.

Then the voters came out in droves against Andrew Scheer,
And there was no one left who gave a damn about him.

Apologies to Martin Niemöller. Although I doubt he'd have much good to say about the NSGOP of Canada either.

I am so glad that Justin Trudeau was able to console Colten Boushie's family, and I thought that both Trudeau and that family were magnificent. The bigots have tried to slander Colten but his family had class all over them. I shudder to think how Stephen Harper might have dealt with this tragedy, and like you I'm glad we have a prime minister who can reach out to our First Nations.

Scheer really is a hypocrite. He claims he's a "Christian " but can't even reach out to a grieving community in his own province, because he doesn't want to annoy his ugly "Christian" base. He should be ashamed of himself.

Thank you Simon for highlighting my friend Mike's tweet on your post today. We are all trying our best to show the people on Twitter what Andrew Scheer and his Rebel crew are really all about.

The laws are fairly clear and if this happened in a non polarized community the shooter would be looking at jail time. I also suspect that in a pro gun community the jury would have found the defendant guilty of involuntary manslaughter while a strongly anti gun community would have found him guilty of murder. Highly paid lawyers would have screened the jury to select as many avid hunters as possible while a public defender probably would have taken the first 12 that presented themselves. So much for unbiased justice especially when it comes to touchy feely things like family and property. School education and discussion on the law would help but its more of a stretch to find a fair unbiased setting to conduct this type of trial. Baby steps are better than none.
RT

HI JD...the irony is that Scheer has a big ad on the CPCHQ page accusing Trudeau of being a coward for trying to dodge his questions, whe of course he's the real coward. And yes I do remember how Harper and his stooge Dumbo MacKay went after the Chief Justice. It was one of the lowest episodes in his scummy years in power. Trudeau on the other hand has not criticized the judge or the jury, only the system. And his behaviour has been exemplary...

Hi Jackie...good one. And I especially liked the last two lines. Scheer is clinging to his rabid racist base because he has no idea how to reach beyond it. His absurd crusade against a carbon tax has even his fluffer John Ivison criticizing him. And if the Liberals use the Rebel against him any chances of making inroads with moderates will go out the window....

Hi anon@3:27 PM...yes, I thought that was a very moving meeting, and exactly the right thing to do. Justin Trudeau was able to console the family and send a message to all the other indigenous people in this country. Harper, who needed the racist vote as much as Scheer does,wouldn't have done anything. But luckily he went down like a sack of potatoes and Scheer is next...

Hi anon@3:54PM...yes, he's another Trump Christian. He makes the right noises, but his actions couldn't be less Christian. As I've mentioned before Scheer is a religious fanatic but first and foremost he's a right-wing extremist....

Hi Yvonne...your welcome, I thought Mike's contribution was the strongest element in my post. It's simply unbelievable that those cowardly Cons would all claim they had scheduling conflicts.Keep up your good work, because we can't count on the Con media to do their job...

hi RT...the trial was a farce. Even if that jury acquitted that farmer of murder or manslaughter, surely he should have been found guilty on negligent use of a firearm. Since when is it legal in this country to fire off warning shots? And whether or not the gun discharged accidentally, if it hadn't been pointed straight at Colten's head he would still be alive. The only thing that can explain that verdict is shoddy work by the police and the crown, and good old racism...