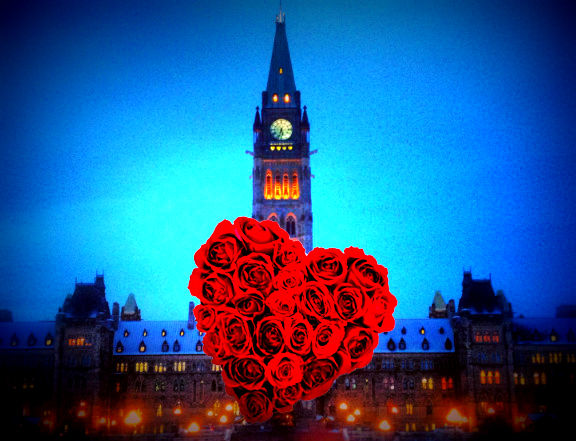 Well as we all know, yesterday was Valentine's Day, a day to celebrate love.

Even in that most unromantic of places, Parliament Hill.

But funnily enough the way the political parties marked the day, told us a lot about who they are. 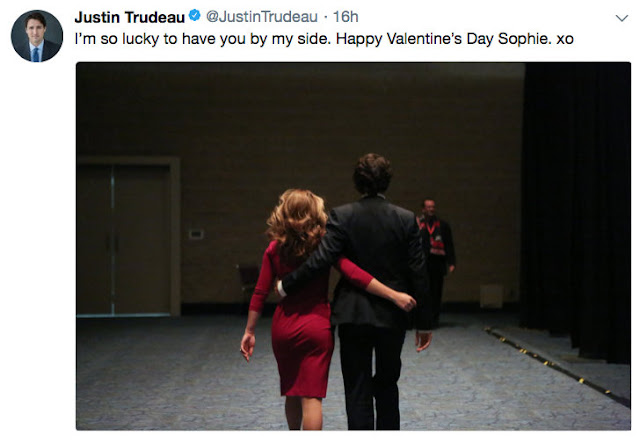 For while Justin Trudeau's card was as romantic as one might expect.

And the NDP card was just as sweet. 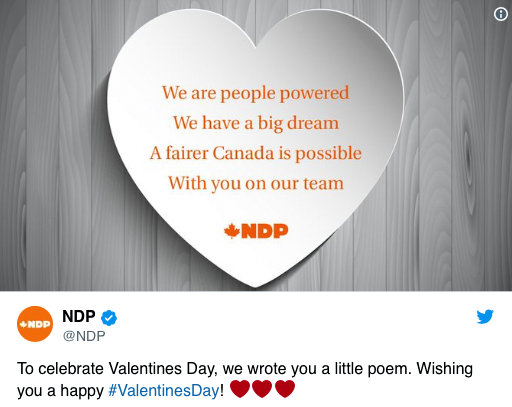 And I liked its poetic message.

This was the Con card... 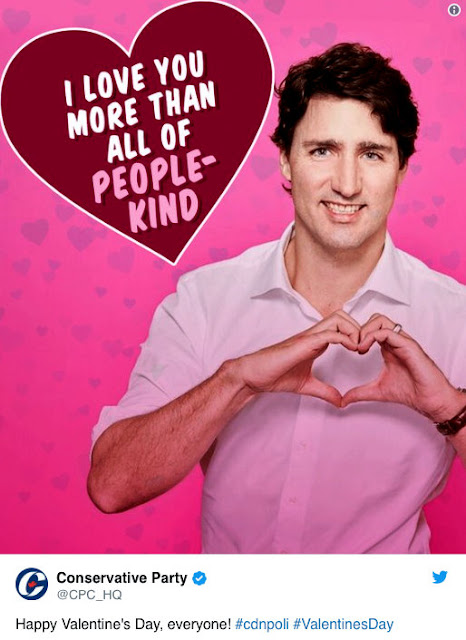 And it couldn't have been uglier.

Or look more like it was produced by their friends at the hate mongering Rebel, which as we all know is where the Cons get their questions from.

And where Valentine's Day is just another day to try to whip up hatred against Muslims.

But then why should we be surprised when Andrew Scheer had more important things on his mind? 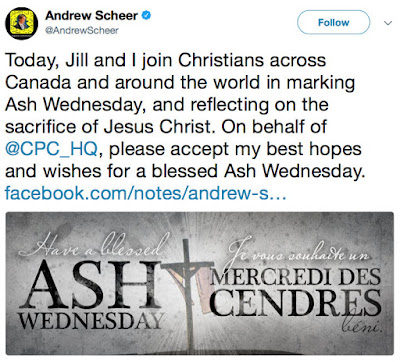 For he is such a religious fanatic.

And his idea of Valentine's Day is probably not what Cupid had in mind... 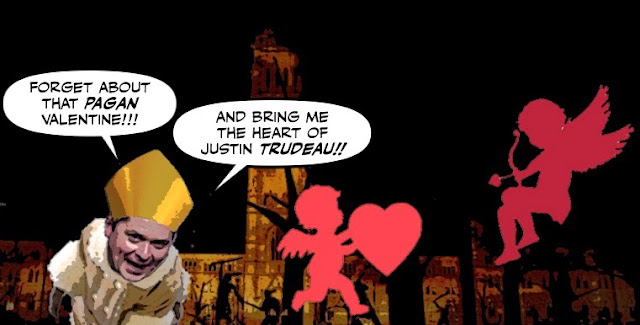 And one can only imagine what life in Canada might be like if he ever became Prime Minister.

I don't think he's ever going to be Prime Minister, not with these kind of numbers.

Especially since the poll tracker includes this weird Forum poll.

Which makes me think the Liberals are even more popular than the poll of polls suggests. 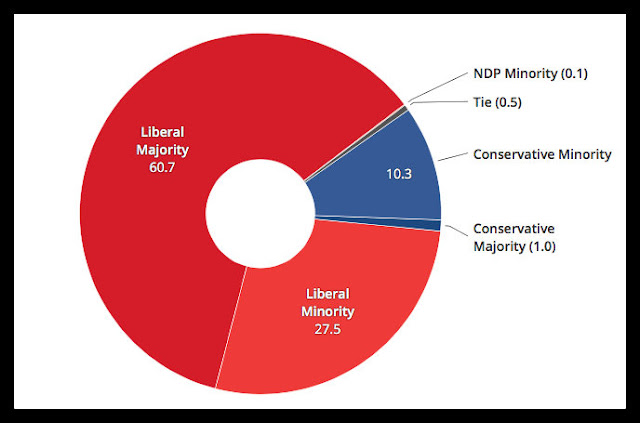 And drawing even closer to another crushing majority.

Which no doubt will have Justin and Sophie celebrating wildly.. 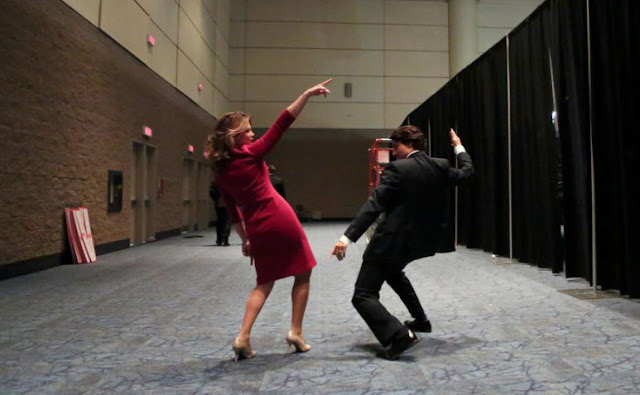 Along with millions of other Canadians.

Oh boy, can you hear those Cons and all those toxic Trudeau haters screaming? And isn't it a lovely sound?

This goes beyond parody and off into some strange place that I can't imagine ever attempting to navigate.
What planet do those people live on? Who are they attempting to appeal to with crap like this?
Part of me wants to see more of the same - perhaps widespread awareness of the cons mean spirited, disturbing and disgusting world view will guarantee their place hidden away in the back folds of a history text, but never as government of the day. And the other part of me wants to puke.

Skygod Valentine, its so Star Wars, good job party of the dark side.

Scheer is pig-ignorant too. Doesn't he know that Saint Valentine was also a Christian martyr? Of course like all those life legends, a lot of Valentine's story was made up afterwards, but some of us think that also happened to the Bible and the Gospel.

The Valentine's Day wishes are sweet and sincere until of course the petty and mean spirited CPC(aka the rebel) displays their sick, twisted obsession with JT.
And where's Schmeagol's card to his beloved? I know you're not supposed to eat meat on Ash Wednesday but I don't recall professing your love for your partner as off limits. Sheesh!
I think Schmeagol was worried he would look weak by doing so. After all in his mind she is a woman and we know how he would deny them their basic rights.
Poor Mrs. Scheer. No card, no love and not a chance of being empowered by her piss-poor excuse of a husband.
Sad.
JD

If Trudeau wins another majority, I'll be dancing in the streets and laughing at bitter old stinky cons

I pray he wins and then installs any system past first past the post.

It's good to see that the partisan bullshit of the Cons isn't getting them anywhere. They can't seem to understand that Canadians don't like that kind of politics. So why I wonder do they keep doing it?

The usual con basement dwellers were out in full force on JT's adorable Valentine's Day Twitter thread, Simon. They're once again promoting the conspiracy theory that his marriage is not only fake -- it's over. Their "proof" is that he posted an old photo of himself and Sophie, and that she hasn't been seen in public much lately (I don't know if this is true, but if so, it's probably for the better, because the more visible she is the more they tell her to shut up and go away, and accuse her of "running the show" and "wearing the pants in the family"). Justin is very proud of Sophie and encourages her to be an equal partner not only in their relationship but as part of #TeamTrudeau on the campaign trail. But because she's not at home chained to the radiator, that means their marriage is invalid according to these stupid cons.

As if that weren't enough, they're floating some nonsense about Sophie not wearing her wedding ring, and timely "jokes" about Justin and gay Olympic figure skaters, along with reposting an irrelevant segment that Sophie did for a French-language comedy show in Québec all of 20 years ago that was really just making fun of celebrity "lifestyle gurus" like Oprah Winfrey or Gwyneth Paltrow, who probably would market some weird product like a vitamin to change the "flavor" of a woman's monthly cycle. Really? The equivalent of a raunchy Saturday Night Live skit is prima facie "evidence" that Sophie and Justin are "consciously uncoupled"? Um, OK... You stay classy, con Internet.

They're firmly convinced of this crap and the Pizzagate nonsense, but call every single disgusting thing Trump has ever said or done, including the infamous "pee-pee tape," his affair with Stormy Daniels, and the plainly evident fact that Melania wants nothing to do with him, "fake liberal news." Maybe they're jealous that Justin has a beautiful woman in his life who actually loves him, and the feeling is mutual. Or maybe they're just drooling morons who can't get a date with either of their own tiny hands. Or any and all of the above.

Valentine's Day is a holiday for hearts; is there a holiday to express pity for Twitter twits and Con/GOP voters and politicians with obviously defective brains?

Simon, sometimes methinks you get a little too worked up about Scheer's religious views.

The fact remains that St. Valentines Day had its origins in--wait for it--St. Valentine! He was a Christian who was martyred, and buried at a cemetery on the Via Flaminia close to the Ponte Milvio to the north of Rome on Feb. 14, 269 A.D.

. But because she's not at home chained to the radiator,
Don't do that, it nearly cost me a keyboard.

I think that your " con basement dwellers" don't have the cognitive capacity to realize that (gasp) a woman might have some interests and priorities of her own. But then they probably are too afraid of women to actually talk to one.

Hi anon...Like you I sometimes wonder where the toxic partisanship of the Cons comes from. But it has been a long process, one hat began when the Harperites brought Republican-style attack ads to our country. Who can forget the way he went after Justin Trudeau? Or how his regime went down in flames after Kellie Leitch and others turned his government into a hate fest. So this is just more of the same, inspired by the past, and fuelled by bitterness. And my advice to you is don't puke, get even...

hi lagatta...As I've said before, Scheer is a religious fanatic, but even more than that he's a right-wing extremist. To use his terminology, he has lain with the alt-right sinners and been corrupted himself. His religion claims it's all about love, but he is all about hate...

Hi JD...There is actually a Schmeagol card to his beloved hand maiden, but I didn't include it because I thought it was more than cancelled out by that ugly Valentine Card to Justin Trudeau. You might think that on Valentine's Day they could suspend their relentless creepy hate mongering, and act like humans for once. But it seems they are what they are, and they just can't help themselves...

Hi Jackie....OMG. How grotesque, those Cons really are the scum of the earth. I have no idea about the state of Trudeau's marriage, but my guess it's doing just fine. I'm sure Sophie has been shaken a bit by having been dragged into the fake scandal over their Caribbean vacation, but she strikes me as a strong woman so I'm sure she'll be just fine. We live in an ugly time, but we know what we have to do to defeat the beasts and build a better world...

Hi David...you should know my views by now. Like any other religion I believe there are good Christians and bad ones, and Scheer fits into the latter category. In fact it's my own Christian upbringing which inspires me to criticize him, for he is such a bad Christian even though I'm now an atheist, he makes me feel like a better Christian than him. And that's practically blasphemy.😇
But as for Valentine, from what I know about him, and after the way I celebrated his day, I'm pretty sure we would have got on like a house on fire...

Hi jrkrideau...that was a good line by Jackie, but both of you should ashamed of yourselves for making fun of Scheer's hand maid. Do you think it's easy to raise five kids, while barefoot and pregnant, and locked in a kitchen or chained to a radiator? Praise the Lord and pass the attack ad....👼

The state of their marriage is also absolutely none of our business.