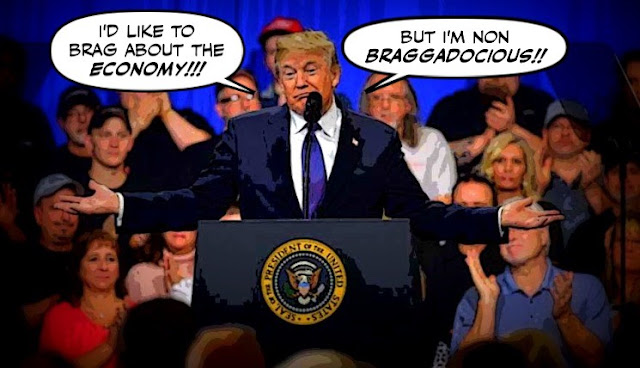 It had to be one of the funniest days in the ghastly presidency of Donald Trump. And for the bloated orange oaf, one of his most humiliating.

For there he was yesterday afternoon in a factory in Ohio, bragging about his economic record.

While claiming he was "non-braggadocious."

But still managing to accuse the Democrats who hadn't applauded his State of the Union address of being "treasonous."

But sadly for Trump, even as he blasted hot air out of every orifice, what he couldn't see but those watching on TV could, was that the stock market was tanking.

And after all that non-braggadocious bragging.

President Trump and congressional Republicans have spent much of the past year trying to connect a giddy stock market rally with their economic agenda, but stocks’ precipitous plunge in the past five days has delivered a sobering reality: What goes up can come back down — quickly and with little warning.

He won't be bragging about this:

With Monday’s steep fall, Trump has presided over the biggest stock market drop in U.S. history, when measured by points in the Dow Jones industrial average.

Unless of course he wants to look even more like a clown than he already does... 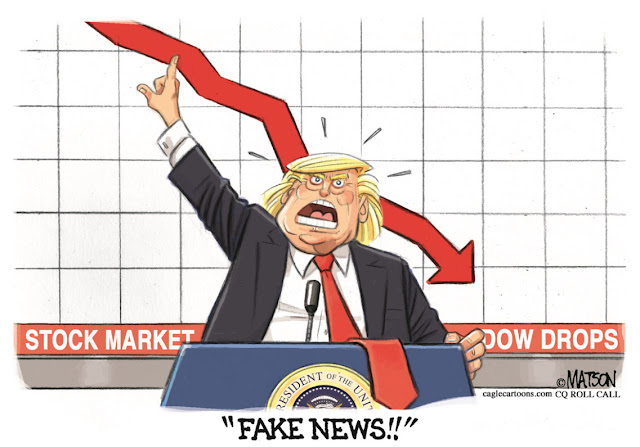 Which would be difficult, but as Stephen Colbert points out, definitely not impossible.

You know, I'm pretty sure that President Ding Dong is going to end up behind bars sooner or later.

And I have to admit I'm looking forward to that wonderful day.

But as for what will bring about his final humiliation, only time will tell... 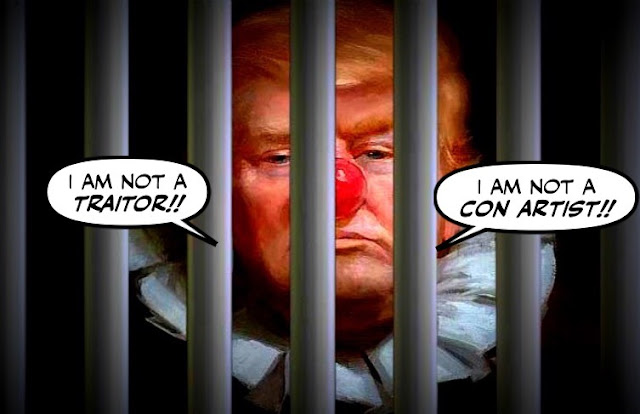 Trumph should start taking credit for good weather. The stock market today has nothing to do with business. It is all arbitrage, and the 1% chasing the last millionth of a percent gain. Thats why the law of diminishing returns is the only economic theory that makes sense to me, and it based upon natural law.

As Bob Dylan said, A hard rain is going to fall. Billionares will become millonares and as Kurt Von Gut jr said, so it goes, so it goes.

He sure does make the best deals, doesn't he? The most incredible, tremendous deals. He's like, very smart, a terrific, stable genius, like his uncle John Trump at M.I.T. who had very good genes. That's how he got very, very rich. Dow Joans is an example of someone who is being recognized more and more for a lot of great things. Many, many people are not aware of this, believe me.

Pay no attention to that Russian puppeteer behind the iron curtain. It's fake news from the lying traitors at failing CNN and the braggadocious New York Times. The real story is all about the memo and Crooked Hillary! Impeach Obama, the bigly terrible economy is all his fault and the Deep State!

Trump still hasn't tweeted anything about the stock market. I can only imagine what he must have looked like this morning running around in his underwear wailing like a baby. It won't be long before he's taken away in a strait jacket.

Putin's puppet calling the Dems treasonous is rich. He who's had so many years of shady dealings with the Russians and who is so afraid of those details coming out is by far the traitor in chief.
And so the King of wall street is suddenly mute now that the inevitable tumble of the DOW has begun. He'll probably blame the Dems for that to or maybe crooked Hillary.
Trump is a sick joke who talks the talk but doesn't know how to walk. His days are wasted watching Fox news and cooking up conspiracy theories that very few believe. His other time is spent either feeding his ego at his rallies, feeding his big mouth or golfing.
Donnie Doolittle is a disgrace, a sham, a blight in history that is hopefully never repeated again.
JD

How Trump ever came up with such a big word as braggadocio is incredible. He must have written it on the back of one of his hands. I can't wait to hear Mueller say "Mr Trump aka Mr Ding Dong you're under arrest for treason."

what is the collusion? The Russia nararative is as false as Trumps hair

Colbert's take on the Dotard's speech in Ohio is really funny. The gloating demeanor of the narcissistic braggart in chief looks as if he just bagged his business partners wife or spent the night at one of Epstein parties. What the Russians giveth, Mueller and the US creditors taketh away.
RT

I didn't mention collusion though it hasn't been disproven either. Then again maybe Trump's telling the truth(lol).
JD

Everybody knows who’s doing the leaking
Everybody knows that The Donald lies
Everybody got this broken feeling
Like their country or their dog just died
The top one percent fill their pockets
Where does Wolff send the box of chocolates?
Now I suppose
Everybody knows

Why We Mourn Leonard Cohen in the Era of Trump
https://forward.com/culture/354361/why-we-mourn-leonard-cohen-in-the-era-of-trump/

The rich are getting richer, the poor are getting screwed
http://www.irishexaminer.com/lifestyle/artsfilmtv/the-rich-are-getting-richer-the-poor-are-getting-screwed-465770.html

hi salamander... thank YOU. I've never felt less like blogging. But I feel I must add my voice to the historical record, so hopefully people in the future won't make the same mistakes we did...

hi Steve...my rich uncle tells me it's only a necessary "correction" but it doesn't make much difference to me because I keep my money in my mattress. And Trump can claim the credit for everything, but he ain't getting any from me...

hi Jackie...yes, he's a genius, he knows more than the generals and more than the Koch brothers. The Deep State is trying to make him look bad, but he's not a traitor, the FBI is the real enemy. And the only thing for sure is that we are living in his madhouse, and until he goes down we will not be free...

Hi anon @4:02 pm...no, Trump could not have written braggadocious on the back of his hand. His hands are too small. President Ding Dong must have memorized it somehow. But I read a story the other day about how killer whales can be taught to speak some words, so I guess nothing is impossible..

hi JD...yes, it is rich, which in Trump's case is just another word for insane. And all I can say is it better be a blight that is never repeated again, for two Trumps in one lifetime would drive everybody crazy...

Hi Steve...is your last name Mueller? Or do you have an in with the FBI or the KGB? Because if you don't I'd wait to see what happens before going out on a limb...

hi JD...Trump could not tell the truth even if he wanted to. So if he says there is no collusion, it only means he's guilty...

Hi RT... that speech really was a spectacle, with Trump puffing himself up and still managing to look like shit. On of these days his eyes are going to be so puffy, he won't be able to see where he's going and will hopefully fall off the stage. Never in my worst nightmare did I think that the Harper nightmare would be replaced by one even worse. And I can't wait until it's over. I only hope that when it does end I still have enough strength to party...

hi anon@2:38 pm...I'd like to think Trump was running around in his underwear, but I'm afraid he was sitting up in bed, calling his billionaire friends and asking them to please buy lots of stocks to make the market rise again. So hold the straitjacket and get the handcuffs... ;)

Trump's latest "rant" about traitors, along with some of in his party is most likely a test to see what words will play well later this year in the election. We have seen the republicans use all sorts of phrases over the past year. Most likely, in my opinion, to see what works with the voters. Traitors, may simply be the word they want to have associated with Democrats, so when they go to vote and see Democrats on the ballot, they think traitor.

had to laugh, the video has the stock market fall 666 points. right isn't that considered the devil's number or sum such thing.

The stock market maybe responding to the "traitor" phrase the Republicans keep using. When one party is trying to take a country to a dictatorship and use such phrases as, lock her up, firing the head of the FBI, pardoning political friends, and now referring to members of Congress who are Democrats as traitors, some people get very nervous and move their money some where else, which will be less volatile. some of the other world stock exchanges didn't do so well either, but it could simply be a response to the American stock exchange so it will be interesting to see how the various stock exchanges recover.

Paul Ryan's tweet regarding the $1.50 simply demonstrates how out of touch he is. It also demonstrates how poor teachers are, they are so poorly paid a $1.50 is an increase. American teachers make much less than those in Canada do. Taking home a box of ding dongs might be a big deal in Paul Ryan's world, but I doubt it. He simply assumes every one in America is so poor or at least their base is, they're impressed with the largess of their employer. omg, that country is so fxxked.