The Day The Ontario Cons Ate Themselves Alive 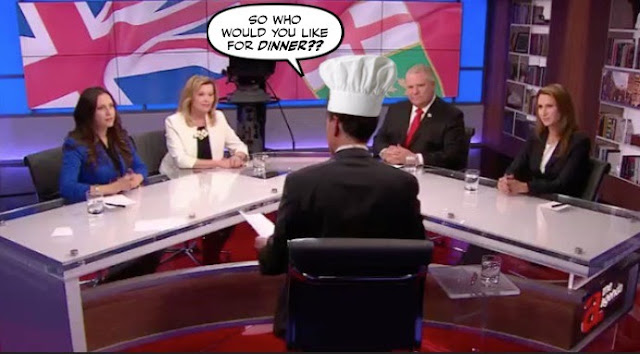 I watched the first debate of the Ontario PC leadership candidates live on Twitter yesterday afternoon at work, instead of watching the tape on TV several hours later when I got home.

Which was annoying, since I was occasionally interrupted, and missed parts of it.

But as it turns out that wasn't a totally bad thing, because it was without a doubt the worst political debate I have ever seen.

And when it finally ended I had this warning for my Twitter followers. 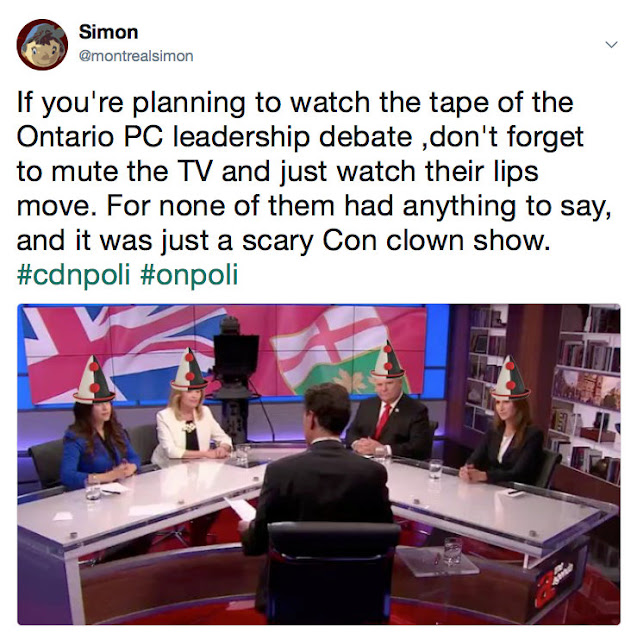 But then later on I thought no, I was wrong, people should watch it.

For as Martin Regg Cohn points out, they'll never see a better example of a bunch of Cons eating themselves alive.

Stay tuned — and if you didn’t tune in to Thursday’s first televised debate among Tories, do your democratic duty and watch at least some of it online.

For it is not to be missed. For better or for worse, there is no other way to glimpse the puerile, juvenile, infantile and facile political theatre on display by the grown-up politicians vying to lead the party that is now leading in the polls, and poised to govern the province.

Which is scary enough, and that's before their disgraced former leader Patrick Brown, who is now threatening to return to haunt them.

Made his presence felt... 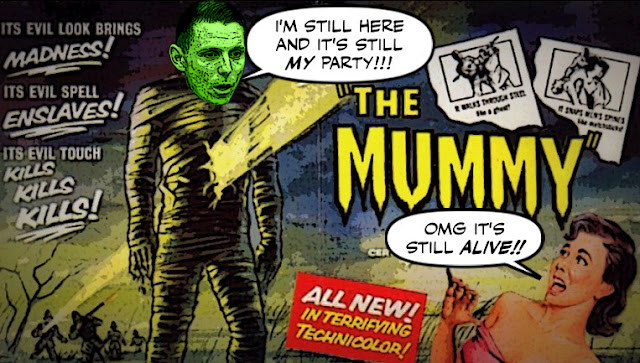 And was attacked by all.

Doug Ford, Christine Elliott and Caroline Mulroney (not to mention fringe anti-sex-ed crusader Tanya Granic Allen) variously denounced and renounced him in every way for sexual misconduct and mismanagement of internal party affairs. And most importantly, for misappropriating or misstating the Progressive Conservative vision.

When they weren't busy demolishing themselves and their party.

Quite apart from condemning one another, the candidates were at war with themselves — contradicting their own past positions and demolishing the party platform that, until last month, the party had put forward collectively as a carefully considered blueprint for governing Canada’s biggest province.

For there can be few scarier sights than the brutish Doug Ford attacking a carbon tax like all the others, even though the Cons need it to fill a $4 billion dollar hole in their platform.

Or worse, going after the province's sex-education curriculum, in an attempt to appeal to the lowlife bigots who hate that very reasonable curriculum for the way it acknowledges and protects LGBT children.

For the stench of homophobia that hung over the room couldn't have been stronger, or more cowardly, and disgusting.

And the good news? The Cons may be leading the polls right now, but with losers like Ford and the others they won't be leading them for much longer.

It is a rare party that eats itself alive a mere three months before an election, but Ontario’s Tories are sitting down for a tainted meal of their own making, while Ford chows down at the head of the table.

Enjoy the cannibal banquet while it lasts.

For like the Harper Party, the Ontario Cons after burping loudly.

Will almost certainly end up in the place where they belong... 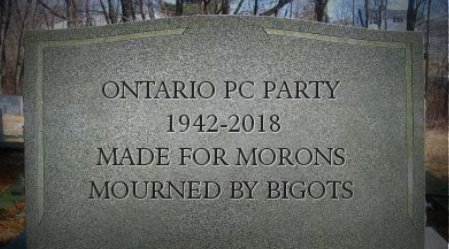 They will eventually be destroyed, but make no mistake, they will win the next election easily. After less than a year, Ontario will be swept with regret and embarrassment, setting the stage for a romp by JT in 2019

With Brown clowning about , a bunch of lawsuits may entertain us right up to the election. With only candidates lacking integrity running, the backstabbing will be fierce.

The interim president better contact the Canadian Olympic people to get some personal safety gear.

It's turning into a cirque du freak already Simon with talk of Patrick(let me pour you a drink)Brown entering the race. This shit show may end up handing Wynn another mandate.
I love your graphic of Ford as "King Dong" Simon but for the sake of art imitating life and for future use, could you please add to "quick give the ape a banana", the following, "and a kilo of hash".
JD

If you think the CONs magic fairy dust is going to help your going to have disappointment.

I cant wait for Doug to become aware the Russians are manipulating A) the leadership vote, and B) the election.

Now Brown is running for leader. This slow motion car crash is getting better and better. The Cons are looking like the clowns you have always called them. All we need now is an Oom Pah Pah band.

Obviously his carefully constructed platform is no longer a leadership propostiton. So he will say I told the truth about sex, but lied about sex education.

Watching the whole debate was unbearable but from the first part my take is Allen should have been wearing a dunce hat while Ford kept up the family tradition of being a lying attention grabbing asshole like his US counterpart. Although inexperienced and overly connected to Bay street at least Mulroney had the gumption to say she would not change the school sex ed program and talked about the important role education and technology had to play in Ontario's future. Hopefully Hamish the king maker can make a queen, otherwise Ontario is likely to become a victim of the Ford nation. And the residents think things can't possibly get worse!
RT

hi anon 9:57 AM...Well that's an interesting theory, and if the Cons did win I think you'd be right. But I don't think they are going to win. I think as even their interim leader admits, that the rot has gone too far to be reversed. And ask yourself this: if the Cons were in position to win so easily, how come they couldn't attract any better candidates?

hi rumleyfips...yes, I'm REALLY looking forward to the backstabbing. Especially if Ford calls upon Robbie's crack dealers to do his dirty work. And the only thing I'm worried about is that if they do destroy themselves, we'll be deprived of the pleasure of doing it ourselves... ;)

hi anon@10:18 AM...No, I don't think that Wynne has done a very good job, but at least she has good policy while the Cons now have none. And BTW so does the NDP. And with a gang like the Cons are fielding, anyone can look like a genius...

hi JD...yes, it is a real freak show, and although I normally wouldn't go near one of those, I must say I'm enjoying this one immensely. But as for adding " a kilo of hash" to the corner caption, it wouldn't seem right. He's the former drug dealer not me... ;)

hi Steve...Unfortunately if the Russians do get involved they would probably try to get Ford elected. For which candidate do you think is most likely to bring down the province of Ontario?

hi anon@6:24 PM...yes, I may have to write another post about the Ontario Cons. It's more than they deserve, and almost more than I can bear. But it does have many comic possibilities...

hi RT...I wasn't kidding when I said that debate was the worst political debate I had ever witnessed. It would have been hilarious if it wasn't so frightening and so depressing. I really can't imagine a worst slate of candidates. For while it's true that Mulroney was the most reasonable, it was also clear to me that she doesn't know what she's talking about and would be jerked about like a puppet on a string by the Bloater and his boys on Bay street. So she's no good either. Which is just as well, because Wynne wasn't exactly in the best position to beat them, so it's really important that the Cons beat themselves...