Can Donald Trump Be Blackmailed Over Sex? 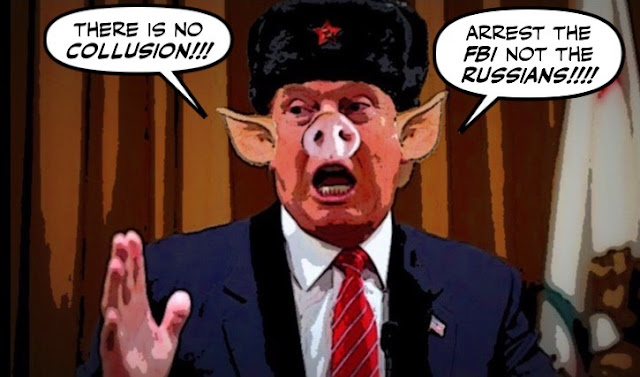 Earlier today I looked at what Donald Trump might be hiding.

And quoted what the New York Times' Thomas Friedman had to say about that.

President Trump is either totally compromised by the Russians or is a towering fool, or both, but either way he has shown himself unwilling or unable to defend America against a Russian campaign to divide and undermine our democracy.

But now Heather Mallick asks whether Trump can be blackmailed over sex?

And comes to a different, and more depressing conclusion.

“I slept w/you because I like you — NOT for money.” So said Karen McDougal to Donald Trump. She may well be the only woman to have ever said this to Trump after sex, or even before. Most women would want hazard pay.

The depraved dotard may be a sleazy old hog. But he uses his money and his morally dubious buddies to "catch and kill" the evidence.

Four days before the election, American Media Inc., publisher of the National Enquirer and other lousy publications, began a tabloid process known as “catch and kill.” It paid McDougal $150,000 (U.S.) for exclusive rights to the story and then never ran it.

So Mallick seems to think that Trump can get away with anything.

McDougal dumped Trump in the end, according to Farrow, because his cruelty began to repel her. He called her mother “an old hag” and in reference to her friend seeing an African-American man, said she liked “the big black d---.” You’d think the last phrase alone would finish off Trump.

But I'm not so sure. 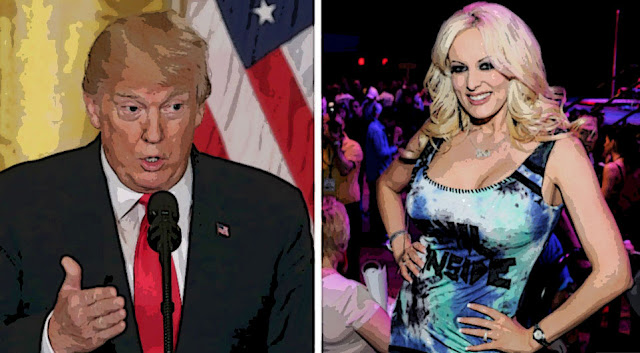 And the lengths Trump's lawyer Michael Cohen went to cover up that affair.

Michael D. Cohen, President Trump’s longtime personal lawyer, said on Tuesday that he had paid $130,000 out of his own pocket to a pornographic-film actress who had once claimed to have had an affair with Mr. Trump.

An affair that Trump claimed had never happened.

Mr. Cohen has previously said that Mr. Trump has denied an affair with Ms. Clifford, whose stage name is Stormy Daniels. She has said the affair took place soon after Mr. Trump’s wife, Melania, gave birth to the couple’s son, Barron.

A claim that may now be tested in more ways than one.

And let's not forget all the women who have accused Trump of sexual assault.

There were 19 women in all who made public accusations of sexual misconduct, or “The Nineteen,” as they had come to be known on T-shirts and bumper stickers. Most had come forward with their stories after Trump launched his presidential campaign in 2015, and the experiences they described having with him spanned five decades.

They claimed Trump had “acted like a creepy uncle,” or “squeezed my butt,” or “eyed me like meat,” or “stuck his hand up under my skirt,” or “groped with octopus hands,” or “pushed me against a wall,” or “thrust his genitals,” or “forced his tongue into my mouth” or “offered $10,000 for everything.”

Which leads me to wonder what will be the reaction of decent Americans as the growing evidence of Trump's sleazy activities is is slowly but surely revealed?

Or for that matter how will that sleaze test the hypocrisy of some of Trump's most faithful supporters and their MAGA Jesus? 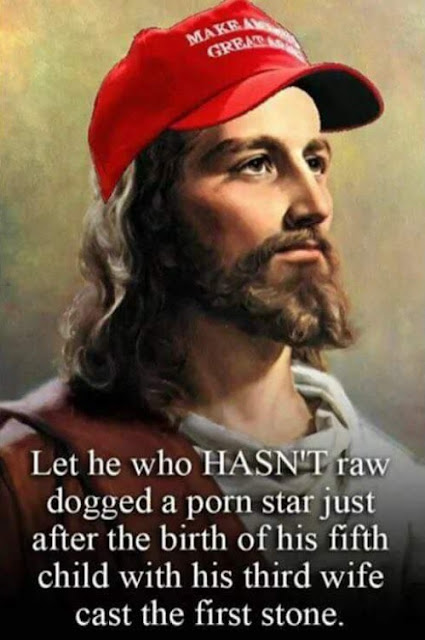 And what will the politics of perception end up doing to Trump? 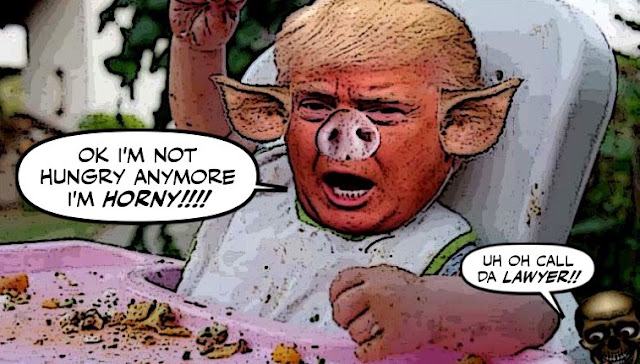 And here's what I think:

I don't know whether Trump can be blackmailed over sex.

But his piggy behaviour is doing him no favours.

And together with his treason, it will help destroy him.

Spare a thought for Melania...

Today’s (Tuesday) White House press briefing with Sarah Saunders should be a hoot! About 11:00 am PT/ 2:00 pm ET. Watch her lie her ass off for Trump. First press conference in a week.

I never thought I'd feel sorry for Melania, but the way Trump treats her is totally disgusting. And as for all those other women if he wasn't a billionaire he would have been charged and locked up long ago.

I predict in the near future Melania and son Baron will return to New York to live.

who thinks its not SOP for Russia and the US. Who thinks it won the election for Trump?

Who thinks you are not being manipulated to see Russia as the new threat after ISIS has run its course?

Who thinks Trump and the Russians worked in concert?

Who thinks the NSA does not know exactly who hacked/USB sticked the DNC?

Thats scary because the fake war with Iraq was far closer.

Do you feel the same way about Clinton?

More or less with way more thought this post points out why I think Trump as President is a good thing for the world.
https://www.zerohedge.com/news/2018-02-20/real-reason-establishment-frauds-hate-trump-and-obsess-about-russia

do like your pictures of dtrump. can he be blackmailed. In my opinion, no. to be blackmailed you have to have the feeling of shame regarding your activities and Trump doesn't know what that is. There is nothing in this man's life which has come back to bite him in the ass, so he just doesn't care.

What I have noticed is the First Lady has taken to wearing coats, sweaters, etc. over her shoulders. I do wonder if she is doing that so her husband, the President, can't touch her hands?

Hi Steve...I don't think most people believe that the Russians won the election for Trump. But it seems clear if you read Mueller's indictment, that they did try to influence the election results:

And no, I don't think we are being manipulated into seeing Russia as the new threat, as much as I would like to believe that better relations are possible.

You clearly also hope for better relations, but delusion will get you nowhere...

Hi David...I watched that Trump cow try to wriggle out of one hard question after the other, and fail miserably. How can you defend the indefensible? But maybe Steve would have enjoyed the part where she insisted over and over again that Trump had been much harder on the Russians in ONE year, than Obama had been in EIGHT. *Sigh* So much for better relations, hello Third World War...

hi anon@10:03...Well since you've admitted it I will also. I do feel at least a bit sorry for Melania, for having to put up with that sexist pig. I'm pretty sure she was forced to sign a brutal pre-nuptial agreement or she would have left long ago. I wish her and her poor son Barron all the luck in the world...

hi Steve...why should anon@1:57 PM feel the same way about Clinton? He too did disgrace himself, but compare to Trump he was practically as chaste as Jason Kenney. And I don't see a long line of women accusing Clinton of sexually assaulting them. I realize you're a Trump supporter, but nobody should defend the disgraceful way he treats women...

hi Steve...forcing me to read one of those zerohedge.com news used to be a capital offence in my book, I just don't have time to read those wankers without wanting to scream "get out of your basement, or break a window and smell the coffee, or the flowers, or a pizza, or whatever !!!" Having said that there are some things in that article that I don't disagree with, but the problem is that everything the author blames Obama for is becoming worse under Trump. The Billionaires Club has never had such a good time, and Trump is dropping more bombs in one day in places like Afghanistan than Obama dropped in a month. And he's spending billions to strengthen the military which will not only make the Russians more paranoid, it will lead us to the brink of the Third World War. So as I said before, defend Trump by all means, but please remove your blinkers first...

hi e.a.f....You're right about Trump being shameless, but even that hog has to take some care not to drive his evangelical followers away. And unless he can shore up the female vote, and win some more millenials over to his side, he will pay for it in the next election...