Polls Wars: Who Is More Popular The Cons Or The Liberals? 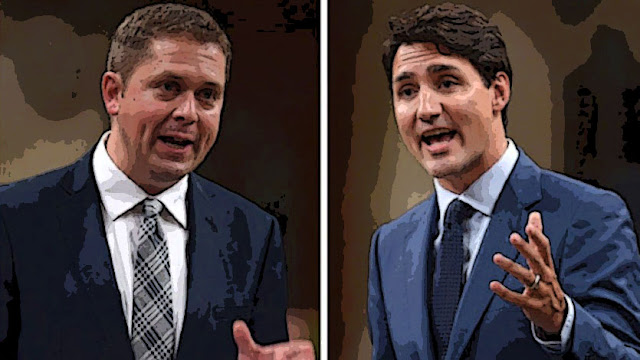 I realize that a poll is just a snapshot in time, and that all of them come with a margin of error.

But trying to figure out who is doing better these days, Andrew Scheer's Cons or Justin Trudeau's Liberals, is getting to be almost impossible.

For first there was a Forum poll five days ago that suggested that Scheer was ahead for the first time ever.

But it was followed the very next day by a Nanos poll that suggested he wasn't. 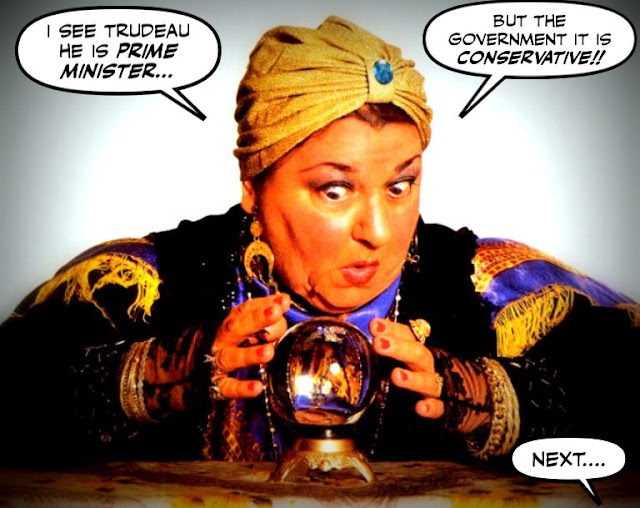 Because an Angus Reid poll suggests that Canadians favour Trudeau as Prime Minister, but would prefer a Con government.

And if that wasn't bizarre enough, the poll also suggests that a strong desire for change is being driven not by the restless young, but by the impatient old.

While millennial voters continue to sustain the Prime Minister in public opinion terms (60% approve), older Canadians are a different story. Trudeau’s steady decline with Canadians over the age of 55 continues this quarter. Last September he held the approval of two-thirds (66%) on them – this quarter that number drops another four points to 44 per cent, down 22 points over the last year.Canadians ages 35 to 54 hold a similar view – 46 per cent approve of the Prime Minister.

Which seems to me to be in violation of the laws of nature.

But then just as I was about to declare that you can't trust anyone over the age of 35.

Along comes an Ipsos poll to suggest that nothing has really changed.

Despite a string of political controversies, including the Liberals’ proposed tax reforms and the Omar Khadr settlement, voter support for Justin Trudeau’s government remains stable, according to an Ipsos poll.

In fact, if an election were held tomorrow the poll suggests 39 per cent of Canadians say they would vote for Trudeau’s Liberals edging out Andrew Scheer’s Conservatives at 32 per cent.

And that we're in exactly the same place we were the night Stephen Harper was evicted... 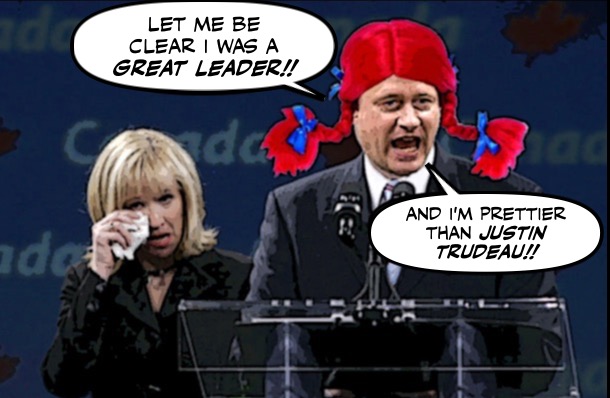 Which of course is something to celebrate.

As is the fact that while Canadians may be as confused as I am, some things do seem clear.

Andrew Scheer is just not ready... 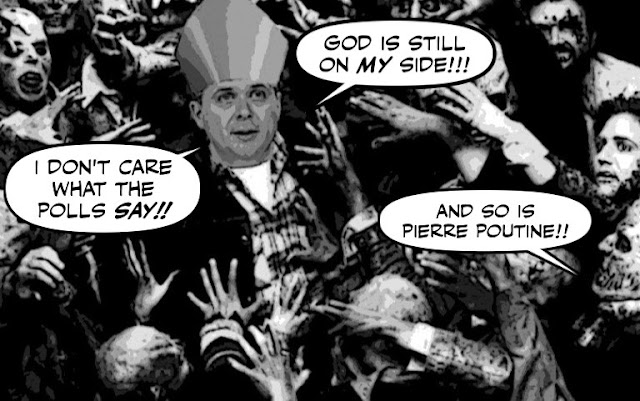 No matter what the voices in his head might be telling him.

And since Justin Trudeau is the unanimous choice of all those polls, despite the best efforts of our Con media.

He is probably going to be prime minister for a long long time... 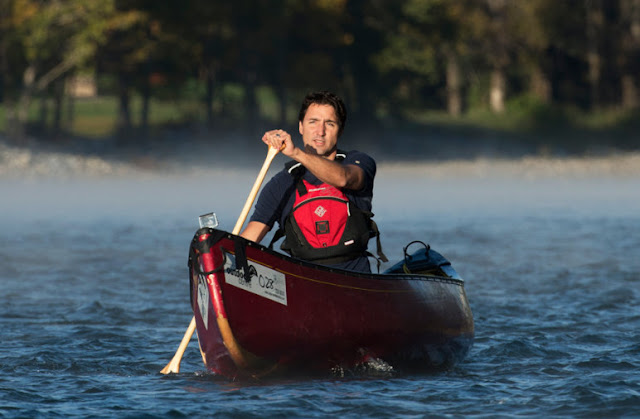 Angus was asking a leading question. Satisfaction is at 50%. The interesting one is Ipsos, bullish on the connies yet has JT up by a healthy margin. They are also the most recent in the field.

The Prince has had an easy go for the last two years. Both opposition parties will soon have new leaders, to melt some waxy liberals. Wynne, who will soon crash and burn, won't help.

The Little Prince just won't be up to the task ahead. Still has nice hair, though.

A lot of people like Justin Trudeau on a personal level, but he and his government are incompetent (this is none ideological, the Trudeau government has bungled some extremely basic duties like appointing officers of Parliament, not to mention breaking promises on issues like MMPR).

So it's head vs. heart, head says the Liberals aren't up to the task, so some on the centre right shift back to the CPC.

But they still personally like Trudeau, but they are conflicted.

See the Nanos poll is really a rolling poll, which a combination of 4 different small polls, which get combined into one larger poll.

So in the latest poll Trudeau numbers did dip slightly, but he was still in the lead because he was benefiting from earlier sub polls that had him leading.

If the current trend continues, with each week you will see new lower polls replace the ones that have Trudeau leading, leading to Trudeau dropping like a stone.

I think this is do partly to the tax changes that target parts of the Upper Middle class, when combined with the, revelation that Trudeau and his finance minister are exploiting their own loop holes that remain untouched, such as having trust funds and multiple corporations in their name, which protect their wealth from taxation.

One or the other Trudeau could weather, but both make him look like a hypocrit. This could be the beginning of the turning point against Trudeau.

Especially since soon the NDP will have a new leader, so will possibly get a honeymoon bump in the polls, further damaging Trudeau.

Are the Cons getting insecure? Perhaps "impatient old" really means "frustrated Cons" because they have to share that impatience between newly aged Boomers who aren't really conservative and the shrinking Con base (ironically, base = al Qaeda, in Arabic), who are existentially frustrated because a significant number of them will have attrited by 2019. Without recruitment of younger supporters---except maybe a few confused alt-rightists, nazis and assorted skinheads attracted to the Concer that's finishing off the moribund party ---the Kellie Leitch faction---the Sheer Harperness of the Conservative party as it's constituted today will do its ineluctable and unelectable work.

Desperate for their throes to be mistaken for importance before Jagmeet sucks up all their oxygen, they cloy pathetically at the faintest good news---soon practically any news. Next stop: third place party status.

Imagine the quavering rasping from the far end of the House on cold-button issues like turbans, niqabs, and joints. Their party physician warns the party whimp to give Con MPs the "hearing-aids-off" order to avoid potentially fatal spasms of outrage from even listening to hot-button parliamentary debates on issues like refugees and free prescription heroin. But, by the wonders of modern technology, they can be qued to quote Con rote and cite credentials in the war against communism.

Canadians have never experienced, on the federal level, any parliament the didn't give the Cons special speaking opportunities accorded MPs of government and official opposition. It's high time they took their turn in the quiet corner of the Commons like every other party has had to.

Best economic growth in the G7, 300,000 kids out of poverty, expansion of CPP. While I agree they often fall flat in their messaging, calling them incompetent is just salty old balding ponytail dipper talk. Must be nice to not be affected by regressive con government.

One the ones who suffered under a CPC government deserved it.

Oh, say it ain't so, that grinning sociopath drawing closer in the race and the purity ponies coming up to split the vote. Fools take heed. You don't know what you got until it's gone.

The selfishness of the voters is really showing with this tax issue and their willingness to lap up fake news from the cons about everything from the Khadr settlement to refugees. What I worry about is that the impatient olds may well be impatient, but the young'uns aren't as reliable in turning out to vote. I will be seriously disheartened and saddened for Canadians if this trend holds through to election season and Trudeau gets toppled one way or another. How anyone can support a party whose leader refuses to condemn fellow MPs for dishing out sexist attacks like "climate Barbie" against female members of their political rivals, is beyond me. But then, I'm not a con. I have a heart. And a head. A pox on the cons and the purist spoilers who enable them by attacking the wrong target.

hi anon...Although I said I had no idea why so many polls are all over the place, my guess is that most people are fairly content with the situation, and the only ones who want to answer a poll are the minority of unhappy Cons and the perpetually disaffected...

hi anon...must you Cons talk like Cons all the time?The Little Prince, the wicked Wynne, the nice hair. It only makes you sound like a drooling member of some kind of cult, and you are going to be so disappointed. Whether you like it or not, Justin Trudeau is almost certainly going to be prime minister until the year 2023, so you might as well deal with it...

hi Gyor...you and I are just going to have to learn to agree to disagree. You think Trudeau has done a horrible job, I think he's done a pretty good job. But if Nanos can be explained because its a rolling poll as you claim, why does Ipsos reflect it so faithfully? As for the NDP I wish them luck, and they can't do worse than they did with the Thatcherite Mulcair as their leader. But let's get real, I don't think anybody is going to stop Justin Trudeau from being re-elected. History is on his side, and whatever you think about him, although he isn't perfect, he is a nice guy and a pretty formidable politician. Sorry... ;)

hi Geoffrey...nice one, I enjoyed every word. And I must say I loved the word "attrited" I am going to have to steal it from you. But seriously, you did put your finger on the Con's main problem. Their nasty negativity, and their ghastly base, can only drive younger Canadians away, and that will limit their present, and almost certainly kill their future. The Liberals, the NDP, and the Greens on the other hand have reason to be optimistic about their respective futures. And I will continue to dream happily about a mighty progressive coalition...

hi anon...yes, there are reasons to be worried, and I share your fears. But as I just told Geoffrey, I truly believe that history is on our side, and that what seems so hideous today will eventually be just a bad memory...

At least Justin, like Harry, is a prince (even if Trudeau doesn't have the official title, he carries himself with dignity and at the same time engages we commoners with compassion and humanity). Scheer and his ilk are trolls under the bridge. All of them paying tribute to their troll king below the border.