How To Save Your Soul In Trump's Hell 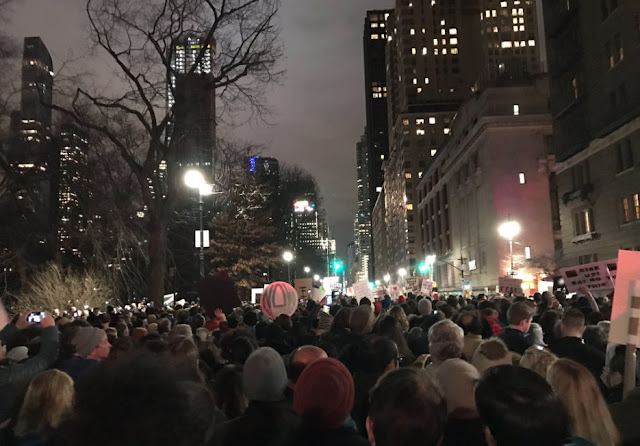 Ever since Donald Trump became president, the resistance to him and his deranged regime has been loud and proud. 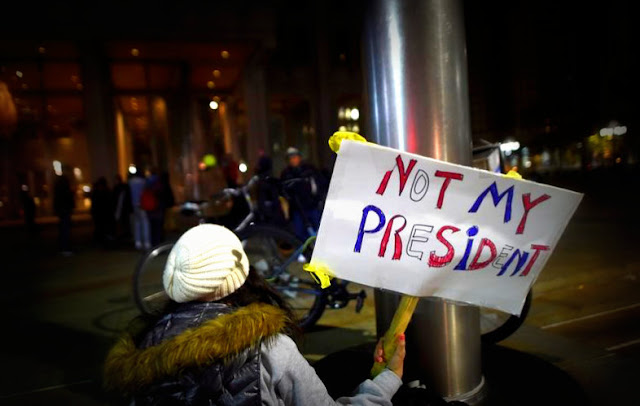 But Trump has now been president for seven months and 24 days, and sustaining that level of resistance is not easy.

Not when Trump is such a monstrous hog. 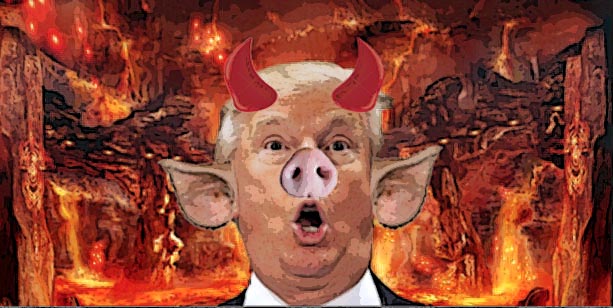 And not as Charles Blow writes, when living in America is now like living in Trump's Hell.

You could stay in hell for a little while if you knew that you were going to get out.

My mother always told me that when I was going through something tough and dispiriting. It was her way of saying that trouble doesn’t last forever, that even in your darkest place, hold fast to the hope and the light, that though today you are in the valley, tomorrow you shall scale the peak.

Well, Mama, this is hell. Indeed, Donald Trump’s America is the Ninth Circle.

And it's hard to keep your spirits up.

While I know that a president is limited to two terms, and I highly doubt that Trump could be re-elected to a second term and think that Robert Mueller’s investigation may curtail the first, I am still struggling to maintain optimism and perseverance.

I don’t think that this is even a matter of fatigue, but rather of the capacity of rage and the length of mourning. Hopelessness is a very human response when the feeling of persecution intersects with the feeling of powerlessness.

Especially when you know that all the protests in the world won't bring down the monster... 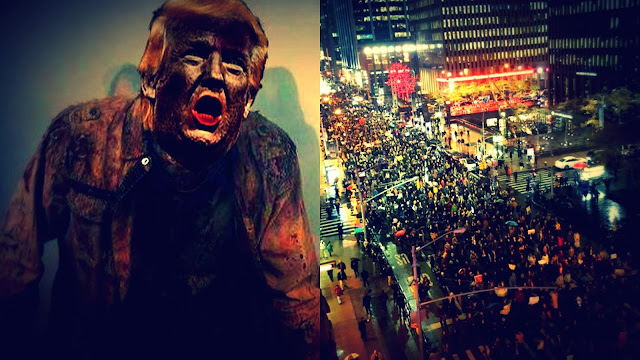 And that you will have to wait until the next election to drive him from office.

I feel for our neighbours. I love them, and it must be horrible to see up close what that monster is doing to their country.

It is hard to witness the dismantling of basic norms, the dismissal of propriety and the devaluation of truth and honesty.

It is like being injured and having the offender repeatedly pound the wound before it can properly heal.

But while the Americans must find their own way out of the nightmare they created, I think we Canadians can use our experience to encourage them.

For while they enjoyed the classy Obama years, we had to fight for almost ten years to get rid of our monster Stephen Harper.

And although it was hard, long, and depressing, we finally did it... 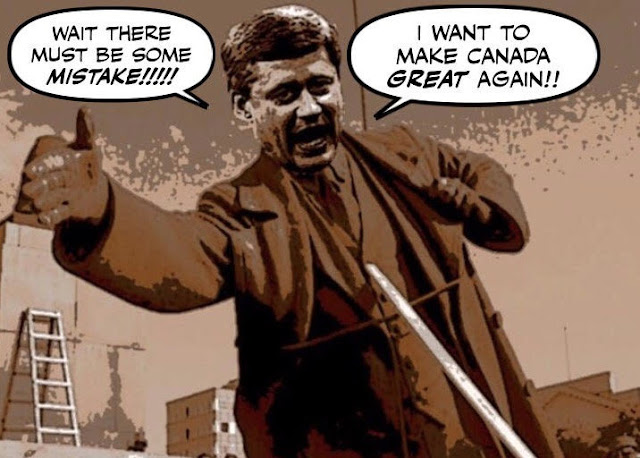 Harper came down and so will Trump.

Blow is right when he says this:

I try to nourish my soul so that it will survive, because I know that the fight is not finished. We are in hell. We have to remember that one day we will get out.

And this would be my message of encouragement to our neighbours... 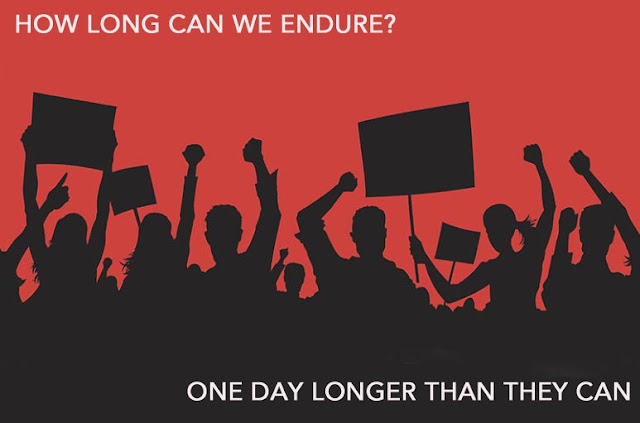 Resist, resist, never give up.

The longer and harder the struggle.

The sweeter the victory...

Nice Simon, I too feel sorry for my friends in the U.S. but like you I know that they will win in the end. In the meantime I'm going to print out your last pic and paste it on my fridge. :)

I completely understand how Charles Blow feels because I feel the same way. What I would say to him and other progressives is that they need to approach the struggle like a marathon rather than a sprint. Just keep chugging along and sooner or later victory will come.
Sarah B

American here. Not all of us will make it out alive, unfortunately. Hate crimes are up, the suicide rate has skyrocketed (particularly among the LGBT demographic), and the opioid crisis is making the AIDS epidemic look like a spate of head colds going around the office. A black boy just got lynched in New Hampshire by his classmates who thought it was funny. 8 years old. DREAMERs and refugees are being deported en masse back to the hellholes they came from. Rand Paul's effort to kill the illegal Bush-era Authorization for Use of Military Force got quashed by a power-mad GOP who isn't going to waste their opportunity to dial up the volume of the imperialist warmongering to unprecedented levels, possibly even to the point of nuclear action against an increasingly resistant North Korea or even Iran (the latter of which would really kill everyone, because Israel would activate the planet-destroying Samson Option that we helped them build and turn a blind eye to -- and now, Netanyahu's own son has fully imploded logic unto itself by outing himself as a Nazi on Twitter).

The difference between Canada and the U.S. is that Harper was only in power for a decade because the Liberals had imploded and the vote kept getting split among them and the NDP. Most Canadians, you see with the polling now under Trudeau and back then under Harper, despised him and everything he and his party stood for. That's not true in the U.S. where we still have a very vocal majority (or at least plurality) of deplorables exhibiting raw hatred for anything resembling civil society or "liberalism," and all its attendant freedoms for anyone not like them. They hate racial minorities. They hate women. They hate LGBT. They hate the "undeserving poor." They hate immigrants. They even hate other countries and those who dare commit blasphemy against the "chosen nation" by so much as implying that there are other things that other countries do better than we do. Believe you me, they really hate Canada as evidenced by the violent, blood-curdling venom they spew about Justin Trudeau and literally everyone in his family, including his dead brother and even his children.

The NSGOP is the United States' natural governing party, and it is now a wholly owned puppet government of the fascists in the Kremlin. We have hit rock bottom; we've fallen and we can't get back up. We have elected the enemy and it is us. America is not Canada. America will never be Canada. The fact that Canada even exists is because America hated Britain and was going to execute the opposition. Americans hate Canada. If you want proof of this, look no further than the fact that we had our chance at a Pierre in 1960 and it didn't work out so well, because someone else had their "shot." We had our Trudeau and could have had our Merkel. Instead, we got Hair Dumpsterfuhrer. He Made America Germany Again and this time, the Allies aren't coming to save us. We'll either sink on our own or, more likely, take everyone else down with us in a glorious Rapture for the holy profits of war.

Sorry, Canada. I was "with her" and I don't know "what happened" but, as cliche as it may sound... I am so, so, sorry. Cherish your Trudeau for as long as you can, as long as his days on earth if need be (and may they be many, full of joy and rife with achievement). Keep him and treasure him. Listen to your heart before you tell him goodbye.

I believe Robert Mueller will take that motherfucker down but then the real work will begin. Dump is a symptom of a gigantic problem that did not materialize out of nowhere.

hi Kathleen...I must admit I had never heard of Johnny Reid. But now that I know he was born in Scotland, and that one of his songs is called Fire it Up I think it's a good omen...

hi anon...thank you, I'm honoured, and like you I do feel sorry for our decent neighbours. But as I said in my post, I don't doubt they will pick themselves up, unite, and expel the orange oaf from office, after Mueller nails him to a post...

hi Sarah...that's good advice, but it's easy for us Canadians to say that. I know if I was living in the U.S. I'd be charging at the Trumpkins like a raging bull, and would probably be in prison already... ;)

hi neighbour...thank you for that incredibly brilliant and powerful comment. I must admit that when I finished reading it, I just sat there stunned. And I'm afraid that after that great piece of writing, anything I say is going to sound so trite. But I'm going to say it anyway because with all their flaws, and in spite of their violent history I love our neighbours and I KNOW they will get their country back. Your country has gone through a terrible time since 9/11, but your people are resilient, and there are more good people who live there, than there are people in Canada. Everything you said was true, but please use your mighty writing skills to inspire others on to victory. In the name of all those American boys who lie scattered around Europe, in the name of my grandfather who was attached to the U.S. Navy to learn how to fly Corsairs, and taught me to love your country, never give up. As I said in my humble post, the harder the struggle, the sweeter the victory. And we shall celebrate it together....

hi anon...yes it's true, Trump is a symptom of a larger problem. And those who will defeat him must be conscious of that, or another Trump will spring up. And he or she could be more dangerous, than the Orange Oaf we have now. I think next year will be a decisive year in that regard, when progressives in the U.S. will come to terms with what is needed, and choose the right leader to win their country back....