Donald Trump and the Disciples of a False Prophet 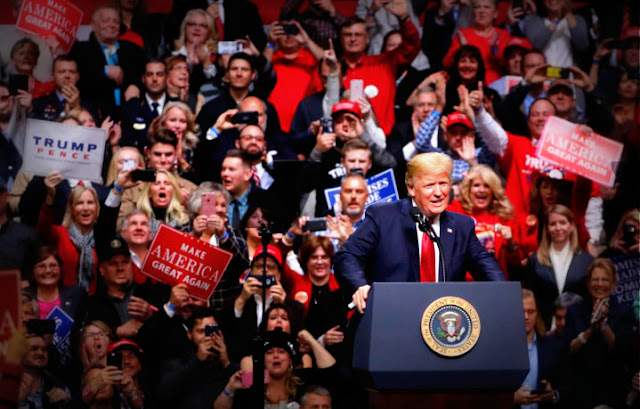 Well there he was in Nashville yesterday, surrounded by his faithful supporters, and bellowing like a beast.

Giving them what they wanted.

Another chance to chant "lock her up" four months after the election. 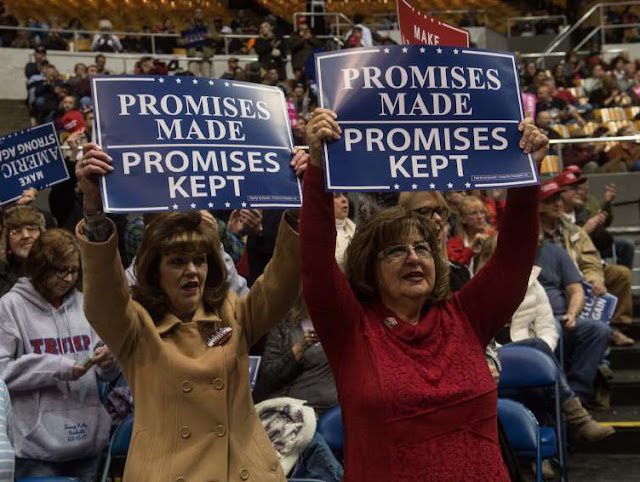 Too dumb to understand that he is breaking his promises, and that they are as Charles Blow writes, disciples of a false prophet.

His entire life, Trump has sold shimmer and called it silver. It was and is all an illusion, a brand built on selling banality with braggadocio. He shaped vapors into dreams and delivered them to those hungry for a taste of the showy, hollow form of the high life he came to represent.

Now even some of the people who once supported him with vigor are being forced to remove the scales from their eyes. They are now the betrayed disciples of a false prophet.

And nothing screams betrayal more than Trump's plans to repeal and replace Obamacare. 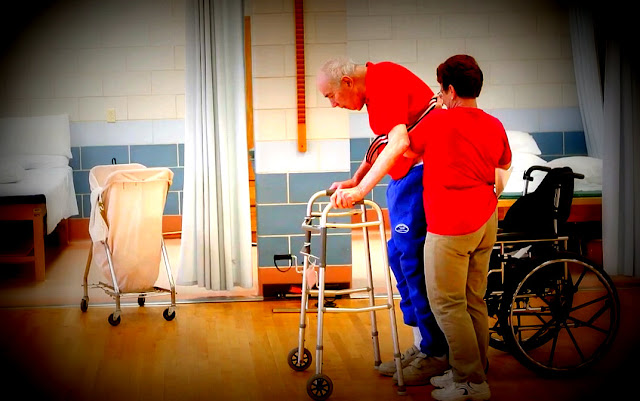 As the Congressional Budget Office assessment this week of the replacement plan makes clear, it would cost tens of millions of Americans their health insurance. It would be a boon to more well-off Americans and a bane for those not so well-off. Specifically, costs could skyrocket for many elderly people.

For his shabby Trumpcare can be summed up as less for those who need it the most.

And would hurt more of his own supporters than those who supported Hillary Clinton. 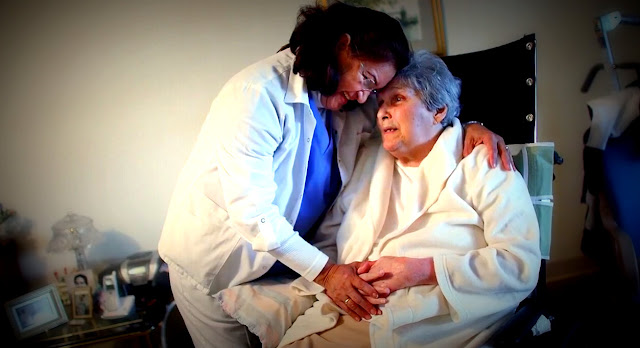 Some of these Trump voters who are literally being kept alive because they gained care under the Affordable Care Act voted for a man and a party who promised to take it away.

So it won't be long before those betrayed supporters are chanting "lock HIM up."

Or screaming in pain as they die.

Or shouting like Keith Olbermann does, "We want to live!!!"

And this too is true:

Trump’s lies, his brand and his presidency are like a house of cards and the truth is a box of matches. It’s becoming ever more likely that the consuming flames — destined to reduce the entire edifice to ashes — are imminent, as Trump slowly converts former acolytes into disappointed adversaries. 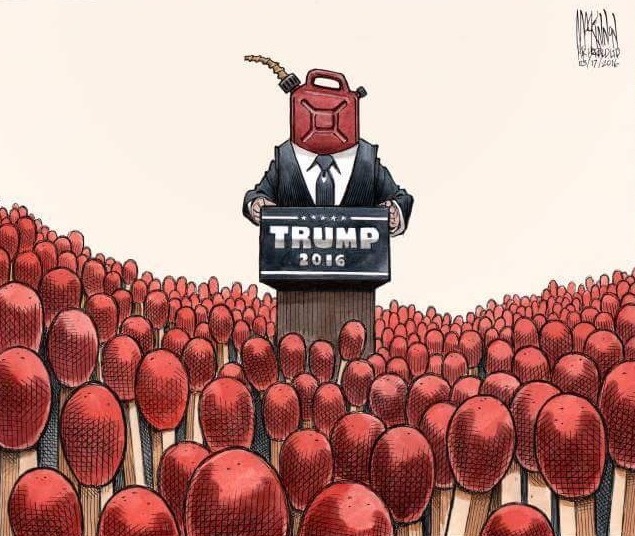 He's playing with fire, the shadow of treason is hanging over his head, he never should have been president.

And The Resistance is slowly destroying him.

But in the end it will be his murderous Trumpcare that finally finishes him off...

His "rallies" remind me of the "rallies" Hitler held and they serve about the same purpose. Its part of the circus act.

Watched the CNN news with the budget. that was entertaining as the spokes person said Trump was withdrawing financial support for Meals on Wheels for the elderly because there was no evidence it worked. he went on to site how many hundred billion had been spent on it since implemented by one of the Bushes. OMG. who would ever have thought of any of the Bush presidents as a socialist,

The other lively debate was from a reporter from Penn. who asked questions regarding the withdrawal of funding for after school education programs. As I under stood it, the Trump spokesperson said these programs were designed to feed children after school and there was no measurable evidence that it improved school performance. (we know breakfast and lunch do so I guess they'll stick with that. but just to relieve hunger, well that doesn't count) The reporter went on to try to drive home the point these programs helped people who voted for Trump. the spokesperson was just about, no measurable evidence it worked. Well here is a new one, hungry kids will steal if they don't get food. Can hardly wait to see Trump build private prisons for kids who stole food.

Because there were no measurable improvements from these programs the spokes person said people who worked hard shouldn't have to pay taxes to provide the money to the states. It did appear as if Trump was downloading services to the states. the spokesperson was also big on getting the deficit under control. Well that's real easy, no $54B for the military and no tax cuts for the wealth. But it would appear Trump would rather the elderly and children went hungry then deny the wealthy their tax cuts. This will not end well.

It maybe Trump will stay on the road with his circus routine. Although if they defend enough programs he might have to start providing bread at the circuses. He wants to whip people up into a state so they don't question what is going on around them. As things worsen, he will be on the road a whole lot more. If this budget passes, then impacts will be seen quickly. Then 2018 will be upon all those Republicans who voted for this and they may loose. They voted for change and Trump and his Republicans are going to give it to them. its just not the change they thought they were going to get. Trump may think he can do this because unemployment is down, but given the low wages in the U.S.A. you can still work full time and need assistance.

Wonder what Betsy DeVos will say about all those hungry kids in her schools? Haven't heard word one from her lately. She must be just counting all the money her family firm will make with the private schools.

I suspect that no matter whatever happens there will be a small hardcore of supporters that will never desert him. Any problem, any mistake was due to his enemies, he was BETRAYED! and so on. There was a conspiracy, there were many conspiracies, it was the CIA no it was the Bilderburgers, it was George Soros, no it was Maurice Strong (never mind that he died years ago). And so on. And some of those supporters will be able to believe all of those conspiracies at the same time.

On the other hand, the large number of Trump supporters who voted because they hoped he would bring real change will turn on him massively, I hope. It might be enough to practically wipe out the Republican Party at the national level which is why we are seeing a lot of Republicans jumping ship at the moment.

The major question with Trump is just how much damage can he do before he self-destructs. He is still head and CinC of the militarily most powerful nation in the world. Frankly he's scary. I had no use for Clinton and thought her dangerous but she was experienced and intelligent and generally speaking level-headed. Trump is exactly the opposite of her.

And he had worse hair.

Are the Republicans in office are a question? Even those referred to as "moderate" are generally deluded market libertarians who simply couldn't care less about the weaker and disadvantaged or who persist in sincere devotion to the cult. Beyond serving the dark money that put them in office and that promises to be there for them at redistricting time, the only thing that most of them care about is being re-elected. The Trump policies currently on display in the budget are their policies. To the extent that they decide to distance themselves from Trump to preserve their electoral fortunes, their hypocrisy will be showcased. But that won't be evident to most of the fools who elected them.

Seeing those people wildly cheering on Trump was a sight to behold. It reminded me of a dead skunk I happened along on one of my walks. Even though it emitted the foulest of odours, it still had hundreds of flies around it basking in the heady aroma, seemingly oblivious to the fact that their host would soon be torn to shreds by the prey that were always watching and waiting for their chance to pounce.
JD

Well to a "TRUE" conservative, the Bushs probably were pinko communists. Ask the Koch brothers—GWB actually accepted that climate change was real.

Glen Greenwald in The Intercept is reporting that the Trump budget is just a proposed budget that the Heritage Foundation drafted last year. Recycling at its best. Who said Trump was not an environmentalist.

hi e.a.f...I'm very upset by Trump's plan to stop subsidizing food services for poor kids and seniors. I find that totally shocking, and an act of savage cruelty. I know meals-on-wheels programs play an important in helping seniors stay in their own homes as long as possible, which is a good thing for them and the health system. And many studies have shown that hungry kids can't learn properly. So none of it makes any sense and it just shows how bestial are the Republicans, and why they must be defeated....

hi jrkrideau...I agree with you, some of his most fanatical supporters will never abandon him. After reading what they have to say, I believe they will find a way to blame Soros for EVERYTHING. And although I still believe Trump will eventually self destruct, I also believe it's quite possible that he will lead us to catastrophe before he can be stopped.
I have never seen anything like it, and it is my worst nightmare....

hi John...it's hard to say what the Republicans in office are going to do about Trump. I think everything is going to depend on how well those up for re-election do in the mid terms. If they do badly, I'm sure many Republicans will start to drag their heels, and try to distance themselves from the orange oaf. But if they do well, and that won't be too hard due to the seats that will be up for grabs, I think they will support Trump to his last day in office. Something has broken deep inside the American political system, and there are no proper checks and balances. We might be OK if no sudden crisis erupts, but if one does god help us....

hi JD....that is a ghastly image indeed. But so was the sight of all those Trumpanzees still cheering their master like a god, or chanting "lock her up" like a Salem witch trial mob. I understand and can almost sympathize with those Trump supporters who are simply desperate for hope. But as for the angry ones and the obvious racists I have come to loathe them, and sincerely hope they end up as badly as Trump...