Stephen Harper and the Con Cabaret 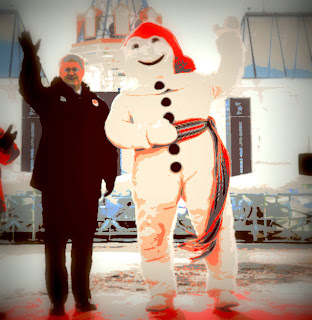 OMG. It's true. They really are trying to change Stephen Harper's image. It's the most massive makeover in Canadian history. Even bigger than the last one.

For there he was today making merry with Monsieur Bonhomme. And so soon after cuddling the chinchilla.

But of course appearances can be deceiving eh? There is only so much lipstick you can put on Harper, and you can't take the grubby out of him and his Cons.

Because even as he pranced with the snow man, his ghastly Minister of Inhuman Resources was taking aim at the unemployed. Again. 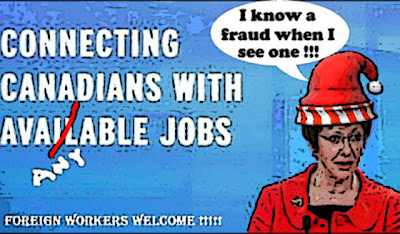 Even though she's married to one of the ringleaders of the In and Out Scandal.

Three of the many grotesque religious fanatics in the Con caucus were going after women. Again.

Another Con MP and the lowlife Senator Patrick Brazeau were refusing to apologize for their disgusting remarks about Chief Theresa Spence.

Even as Brazeau is being investigated by a Senate Committee.

And in Toronto, the monstrous Con buffoon Rob Ford was being found guilty of breaking the rules. Again. 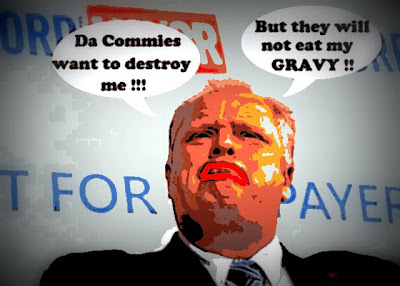 A forensic audit has found that Toronto Mayor Rob Ford broke the spending rules during his 2010 mayoral campaign. "In our opinion, the candidate's campaign expenses ... exceeded the authorized limit by $40,168," said the report from the three-person audit panel.

And remember this is the campaign that boasted about its dirty tricks.

Oh boy. Have you ever seen anything like it? What a carnival of cruelty and corruption.

Welcome to Harperland where a government, like a fish, rots from the head down.

Smear on the lipstick and the pancake make-up.

Welcome to the Con Cabaret...

Or as one of my readers Erin, aka Lucy Dynamite would say... 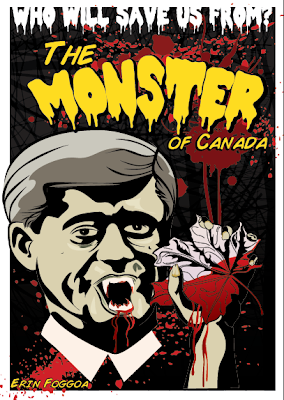 And I can only repeat:

Who will save us from this monster and his corrupt Con regime?

I don't ever remember a time when, I have been more ashamed of Canada since, Harper's so called majority.

During Chief Spence and her fasting for her people? I sent web sites and their comments overseas. They were horrified, this was Canada. They did know about Harper proroguing Parliament, to cover-up his guilt in his part of, the torture of the Detainees.

They were also looking into, seeing if Harper broke the Geneva Convention? He is to be charged with, war crimes and crimes against humanity, if he has done so. Harper would be tried in the Hague.

F.N. parents sent their sons to war, right alongside my own brothers. Strangely, F.N. and our own boys fought, so we wouldn't have such as the evil of, Harper governing this country.

Canada is no different than other corrupt third world country's and China's dictatorships. We would have to do the same, extreme civil disobedience they do, to get rid of Harper. Either that or, let Ottawa, Alberta and Harper, form their own country. The rest of the provinces, can be their own country. Canada will never be clean again. Harper is rotten to the core. The next best thing is, to remove our selves from, the disgusting rot of Harper.

No surprise that Harper would have a rather for a pet

hi anonymous...as I always say to anyone who will listen: don't get mad get EVEN. Join with others in your community to make sure we defeat the Cons in the next election...

hi KFB...either you left out a word or I don't know what a "rather" is. ;)
But I fear what might become of the chinchilla that Harper now has in his clutches. Will it end up as a Davy Crockett hat on the shrunken head of Michael Ignatieff that Dr Harpo keeps in his basement?