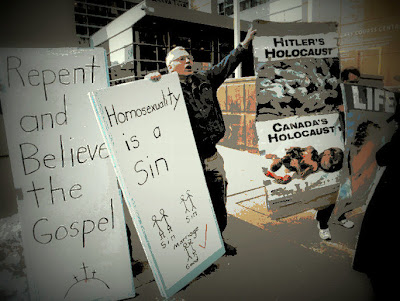 He is one of the most grotesque bigots this country has ever seen.

A former male prostitute, drug addict, and violent criminal who claims he found Jesus in jail.

He has gone after gay people, Muslims, and the pro-choice movement in the most disgusting ways imaginable.

In 2008 after Dr Morgentaler received the Order of Canada, he defecated on a copy of the Order, and mailed it to the Governor General.

But today he's just a LOSER.

In an important decision that upheld the main anti-hate provisions in Saskatchewan’s human rights law, Canada’s top court ruled vitriolic anti-gay speech in flyers distributed by a Christian activist is not protected by the Charter.

The court said two of Whatcott’s hand-delivered leaflets had “hallmarks” of hatred, targeting gays as a menace that could threaten the safety and well-being of others, referring to respected sources like the Bible to lend credibility, and using “vilifying and derogatory representations to create a tone of hatred.”

“It delegitimizes homosexuals by referring to them as filthy or dirty sex addicts and by comparing them to pedophiles, a traditionally reviled group in society,” wrote Rothstein.

I don't want to say anything more about Whatcott, because in addition to everything else he craves publicity, and writing about him makes me feel like taking a shower.

But I will say this, I believe in the freedom to criticize people for their actions, but not for who they are. It's very easy to talk about the freedom to hate if you're not the target. Or don't understand the corrosive effect it has on vulnerable minorities. Or how it can poison a country. Or cause kids to kill themselves.

And as I was reminded yesterday by this little story, the pain bigots like Whatcott and other religious fanatics have inflicted on gay people with their insane hatemongering  crusades, can never be properly measured.

A friend recalled visiting a man dying of AIDS at the time. A former massive bodybuilder, he had shrunk to 90 pounds. ‘Do I look big?” he asked, with mordant humor. In the next bed, surrounded by curtains, my friend heard someone singing a pop song quietly to himself. My friend joked: “Well not everyone here is depressed!” Then this from his dying, now skeletal friend: “Oh, that’s not him. He died this morning. That’s his partner. That was their song, apparently.

The family took the body away, threw that guy out of the apartment he shared with his partner, and barred him from the funeral. He’s stayed there all day, singing their song. I guess it’s the last place he’ll ever see where his partner actually was. His face is pressed against the pillow. The nurses don’t have the heart to tell him to leave.”

Which is why I have been fighting bigots and bullies since I was fourteen. And why I am so proud of these Canadian kids. 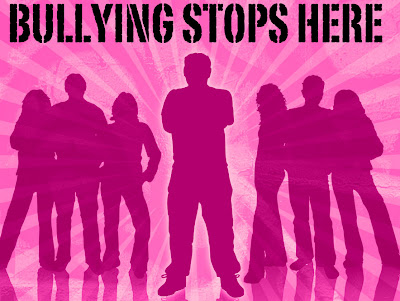 Tens of thousands of people across Canada will don pink shirts today to show their support in the fight against bullying. It’s all a part of Pink Shirt Day, an event being celebrated all across the country to celebrate that we as a society will not tolerate bullying anywhere.

Love trumped hate today. Canada is a better and safer place. Thank goodness for our Supreme Court that Stephen Harper hasn't yet been able to destroy.

Bill Whatcott must be mailing himself a turd. Kathy Shittle is shitting herself.

Gay kids are the big winners.

Well, my 5-year old guy wears pink pretty regularly. (He likes the colour and the whole colour-coding of the sexes/gender/whatever is pretty ridiculous here in North America.)

But he's got a button on his coat: "Homophobia Sucks, and not in a good way" that he wears everyday.

(I don't wear pink because I'm a coward, but mostly because the idea of me in bright colours makes me wince.)

A beautiful, tragic, and all-too-familiar story. I know too many life partners that were shut out of the final moments of the lives (and funerals) of their lovers.

Whatcott not only protested my presence at a theatre event I was hosting (complete with misspelled signs claiming that sodomy killed more Canadians a year than hand guns), but also slid anti-gay propaganda under the door of my apartment - pamphlets that claimed that Canada's pro-gay-marriage stance was the cause of forest fires, SARS and pine beetles.

I, too, cheered when I read about the Supreme Court decision. Whatcott says he will keep passing out pamphlets. Hopefully that means he starts spending his life in prison soon.

What an ass klown this guy is. On another note entirely, one of my co-workers wore pink work boots today which I thought was really cool and also rather symbolic. They were a bit beat up those pink boots were, but they could take a lot of scrapes and dings and mud.

Many of these "christian" bullies seem to hve forgotten the ten commandments, one of which is, "thou shalt not kill". Bullying kills.
It kills the spirit, the soul, the lives of far too many and one is too many.

Out here in B.C. we have had our fair share of the pine beetles. Trust me it wasn't caused by gay anything. It was caused because the winters are too warm. As for forest fires, they are usually caused by human carelessness. Sars????? na, its a disease and everybody gets it. These wingnuts are really wing nuts. How stupid are these people. yes, I know they are stupid because they are bigotted but really being pro gay marriage is causing forest fires, SARS and pine beetles. Some one should tell the idiot we had pine beetles and forest fires and diseases like SARS prior to there being any position on gay marriage. There were forest fires before there were people.

Maybe some one should tell Whatcott the bible has this other little phrase, do unto others as you would have done unto you.

hi thwap...well now that you force me into revealing the truth, I have to admit I don't look pretty in pink ;) Not just because I was brainwashed into thinking that boys look better in blue, but more importantly because it makes me look as pale as a ghost. However, since it was the colour the Nazis forced the gays in the concentration camps to wear, I wear my pink wristband proudly. And good for your little guy for wearing what he wants to wear, and for standing up for the rights of others. My hope that the new generation will do better than we have inspires me to keep struggling...

hi anonymous...yes it was a powerful story wasn't it? I wasn't sure about including it, because the Sullivan story was long and about something else altogether. But then I thought yes, I should include it, for stories like that should be remembered and never forgotten. I can't imagine how people can be so cruel. As for Whatcott the man simply disgusts me in the most visceral way. He's the kind of man my parents warned me to stay away from, and I'm so glad he doesn't live near me. For I'd rather not imagine how I might react if I saw him stuffing his filthy pamphlets into my mailbox. And I must say I can't wait to see if he really does continue handing out pamphlets, for prison does seem to be his natural home. As it was in the beginning, so shall it be in the end...

hi Way Way Up...he is indeed a hideous clown, a truly horrible man. But funnily enough he may have done us all a favour. By getting the Supreme Court to eliminate some of the lesser grounds for taking a case to a Human Rights tribunal, so as to reduce the number of frivolous or merely punitive suits, and focusing on the real problem of hate. And yes, I wondered whether I should have included the Pink Shirt day story in the Whatcott one, but I thought they went well together. As I told thwap I don't look pretty in pink, but it's such a great idea. And a Canadian one too. Rather than think about Whatcott, I'd rather think about them...

hi e.a.f...I was raised by decent Christians to believe that Jesus said love your neighbour. And although I don't believe in God or heaven, I still think that's a really good message. So I find it hard to believe that people who are full of hate even qualify as Christians. And I don't consider them anything but bigots.
And bullies, because when such a relatively small group of people are subjected to such a large amount of abuse for the "crime" of being who they are, that's what it is, and it horrified me.
The good news is that attitudes are slowly changing, today was better than yesterday, and better times are coming...