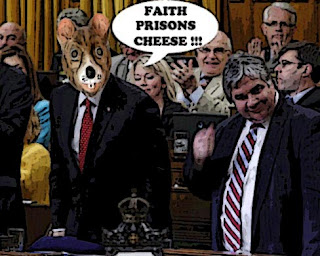 Golly. I have no idea why Pat Martin called the Cons rat faced whores.

Martin launched into a Twitter tirade for the ages Wednesday night, calling the Conservative Party “rat faced whores” and attacking Public Safety Minister Vic Toews’ personal life to express his displeasure over not being invited to an announcement for a local infrastructure project.

I know they're always jumping into bed with foreign interests, for money. Or handing out cheese to their supporters. But can rats OINK?

And I thought Pat was wrong to attack Vic Toews in such a vulgar manner.

We know the religious fanatic is a hypocrite, now leave the old sinner alone.

But I can understand where Martin's anger comes from, as the Cons gnaw away at our democracy, play their cheap partisan games, and taunt and bully their opponents.

And we should ALL be criticizing Toews for the way he has funnelled millions of Porky Action Plan dollars into a faith-based youth centre. For that's the REAL scandal.

Since when do governments help native kids by funding those who would indoctrinate them?

They are out to convert aboriginal youth to Christianity. Their website flatly says so."Youth for Christ Canada exists to impact every young person in Canada with the person, work and teachings of Jesus Christ and discipling them into the church."

Inner-city youth desperately need alternatives to street gangs. But those alternatives should not be delivered by people who want their souls in return.

Are those Cons so eager to pleasure their rabid gun and Bible base that they would forget this Canadian horror story?

And what about gay kids who make up a considerable part of the street youth population? After being thrown out of their own homes, can they really be given proper refuge by those who would persecute them in the name of their hateful Godzilla?

But then that's what the Cons would do to all of us eh? Kill government, replace social services with faith based charities, and make the poor sing or genuflect for their supper. If the gentle followers of Jebesus haven't jailed them first.

Along with anyone who dares denounce their ghastly regime. Or would speak truth to political thugs.

Yup. Pat Martin was right to apologize for his vulgar words. But he should never apologize for his anger. For it is the same anger so many Canadians feel. The righteous anger of all those who hate how the Cons are destroying our country, mocking our democracy, and shaming us in the eyes of the world.

But what we need to do is channel that anger into political action, so we can organize, unite, and eventually defeat them.

Because I don't know if the Cons are rat faced whores... 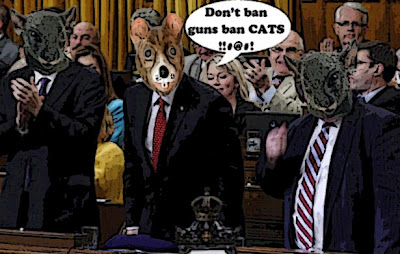 You be the judge.

But I know a lot of Canadians can't wait for the day when they are smoked out of  Ottawa, and forced to scurry back to Alberta.

I know I sure can't wait for that day. It'll be almost biblical eh?

And for other more sinister reasons.

Rat-faced whores is a polite phrase for what they are.

excellent post Simon - always a pleasure to read your blogg.

I don't begrudge Pat his vulgar words for he is one lone voice unafraid to call a spade a spade. If that means dropping a few f-bombs then I don't mind, he shouldn't apologize because he is merely saying what millions of Canadians think. Besides, it's well past due that Toews should have been fired anyway.

So sad to see such hatred directed towards fellow Canadians. You seriously think you guys are any better than the cons? Only fools think there is ANY difference between parties except BS ideology. Self-interested parties of all stripes and their hardcore, sycophantic followers are destroying western democracies. Wake up!

Martin was the only fed politician to speak up against this multi-million dollar project, complaining that the public purse should not be subsidizing a religious organization to deliver public services to youth, many who may not want to "follow Christ". He also backed arguments from Aboriginal leaders and residents who said this was too reminiscent of residential schools to be approved. Within a week, Martin was told to shut up and issued statements that he would work with YFC and the City to make the project a success.

That was in 2010, before election fraud and all sorts of other chicanery performed by the Harper Regime. He should share some of his wrath with the orange party boys who forced him to step down. This fiasco could have been prevented if there had been more public outcry. This predates all the other increasingly Xtian Taliban moves that the Harper Regime has been ushering in, one Friday evening after another.

Oh Pat Martin, better to remain silent and look a fool than to open your mouth and remove all doubt.

hi kirby...at first I wasn't sure if the Cons were as ratty as Pat Martin said they were. But after checking their record, and their pictures, I guess Pat was right... ;)

hi jan...thank you. As you might have guessed I had fun writing it. ;)
And Merry Christmas to you too !!!

hi bcwaterboy...I don'tthink anybody will ever accuse me on being too soft on Toews. Gawd I hope not. But I found Pat's comment a bit vulgar. Not that it wasn't true, buty he could have said it better. However, as I said in the post, I share his anger, and you're right, Toews should have been fired long ago...

hi Beijing...I don't understand why Pat Martin changed his mind about the Youth for Christ centre. I mean I understand the desperate need for better facilities to help street kids, and anything is better than nothing. But funnelling public money into an organization like that one is simply scandalous. From what I've read Katz, the Mayor of Winnipeg, deserves a lot of the blame. And yes, Xtian Taliban are certainly on the move and must be watched closely, for it seems there is nothing the Cons won't do these days to appease their rabid base...

hi Canadian Observer...I'm sorry but I don't agree with you. The Harper Cons are always trying to persuade Canadians that all politicians are the same, to try to turn them off politics, but they are not. Ideology is important, and some are better than others. And since those ideological differences are becoming more marked, witness what's happening in the U.S., you're the one who needs to wake up...

hi Way Way Up... Well at least he's deleted his twitter account. Somebody should convince Vic Toews to do the same... ;)

I'll tell you what I think motivated Pat to "changed his mind". It's likely the party machine operators from the federal and provincial Manitoba NDP told him not to oppose the YFC missionaries. They don't want to "offend" faith-based voters, after all (but fucking over their solid, secular supporters is right in their books... I suppose).

The Manitoba NDP is such a risk-adverse, opportunistic, political machine that it'll take any chance to be at the forefront of a ribbon-cutting ceremony it gets. Justice Minister Andrew Swan even supports some of Harper's dumb on crime measures.