Sarah Palin and the Road to Oblivion 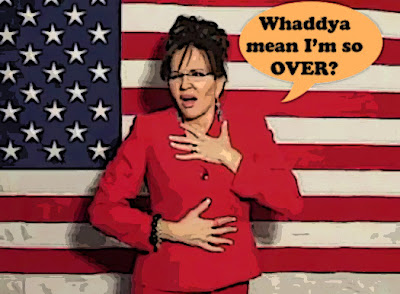 Glory Glory Hallelujah. I see that Sarah Palin is being pounded in the polls.

The latest CNN poll shows that 56 percent of Americans view her unfavorably.

More damaging, though, is this: Sarah Palin's unfavorable rating among women has gone up 10 points. And 59 percent of those all-important independent voters don't like her -- and that's up a stunning 14 points in just a few months.

Like those those halibut she hammered, in her bloodthirsty reality TV series.

Now even the crass cretin Newt Gingrich wants her to think before she opens her piehole. And David Frum wants to render her speechless.

But fear not eh?

She may be gasping like a beached whale. They may have cancelled her reality TV show because she ran out of animals to kill. And she was so BORING.

But Glory Glory Hallelujah. Her shrinking base still loves her.

And her soul hole keeps marching on...

Sarah, Sarah, on a clear day you can see Russia. Or the road to OBLIVION.

She came. She almost conquered. She overstayed her welcome.

We still have to wait a while longer before we sing, "Ding Dong, the Witch is Dead".

amazing what a bucket of water can do....
the water coming from the tears shed at the news from tuscon

Here is a review of a new comic book called "Steampunk Palin" I kid you not. It might warrant a post of its own.

One of the characters is a cyborg Obama named...."Robama"

I am not making this up.

Unfortunately, it may be that her purpose has been served

Like "Patient Zero" in an epidemic, she has spread the virus to others and its not possible to know if her diminishment will lead to a quietening of her "people" or not.

We can certainly hope so.

hi Torontonian...yes you're right, we mustn't be too hasty. I'm going to have to tell Dorothy not to throw a bucket of water at her until AFTER the next election. She helped Obama win big last time, and I'm sure she can do it again... ;)

hi Oemissions...I'm sure if she shed any tears after the Tucson tragedy they were only for Sarah. She had a chance to at least partially redeem herself when she taped that message, but it was an epic FAIL.
The horrible irony is that unlike Palin, Gabrielle Giffords is or was an excellent candidate to be America's first female President. Life is cruel and it ain't fair either...

hi Stewart...thanks for that link. Robama and John McCain with a robot arm?
OMG I practically fell off my chair laughing.
Until of course, I read your conclusion and then I was TERRIFIED. Who will stop her, and where is Robin when we need him? :)