Will the Young Turn on the Old? 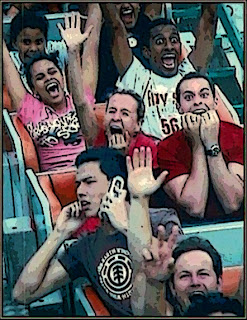 Whenever I feel that the older generation is destroying the planet, I console myself by thinking the younger generation will save it.

But now I'm not so sure.

The poll finds that 47 per cent of young respondents in Canada feel that it is more important for society to reward individual performance than to share prosperity more equitably. That compares with 39 per cent of their elders.

Indeed, 54 per cent of young people in Canada (about the same as in the U.S.) say they want to "earn a lot of money" -only in China and India is the eagerness for wealth greater.

I must say I have trouble believing this poll.  I haven't the slightest interest in being piggy rich. Neither do most of my friends. And although some of them are really struggling to pay the bills, none of us would even THINK of not supporting seniors.

But then I suppose nobody should be surprised if some young Canadians are really that greedy.They are bathed in a culture where money means success. And live in a country where Stephen Harper's Cons promote the cult of the individual. Where taxes are bad, and community is communism.

But I'm sure they'll soon learn the hard way that most of them are NEVER going to be rich. The Cons are just the useful idiots of Big Business who want to turn Canada into a jungle. Without a sense of community we will never save this country. Or the planet.

And of course that money isn't everything.

But then I could be wrong and in that case we're in big trouble eh?

So what will it be I wonder?

Young and old TOGETHER? Community makes us stronger and better, and greed is a Con disease?

Or one, two, three, four, pick up the cell phone and fire off the beer cannon?

And party until they JAIL us?

Or four, three, two, one, where did the future go?

Why are you mad though?

TICK TOCK FUCKER WE ARE ON THE MARCH AND THE EMPIRE IS ON THE RUN.

hi MD Roe...if you mean angry it's because I don't consider selfishness or greed a virtue. If you mean crazy you can answer your own question...

hi anonymous... look whether you like it or not we ALL grow old.
And when you're lying on a hospital bed, would you like others
to help pay for it, or would you rather pay for it yourself?
It's easy to say things when you're young, I say stoopid things all the time. But eventually we all grow up...

American here. Canadians who follow our libertarian example have so much to look forward to. We aren't sissies who wait until you are too old to work to kick you to the curb. Get sick in your 40s baby and expect to die if you haven't made it rich yet.

Within the last six months a woman walked into the emergency room of our only public hospital in Atlanta with her breast in a paper bag. Her cancer was so advanced it had fallen off. She had had cancer since her son was in grade school and finally showed up for treatment when her son was about to graduate from highschool. A single mom, she worked for an employer who would have fired her had taken time off to get treatment when she first spotted the cancer. Good times Canadians. Good times.