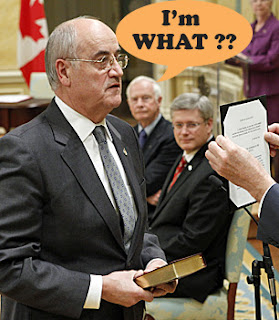 Golly. When I think of Julian Fantino, the wouldbe Lord Protector of Canada, who believes that the Charter of Rights is only good for criminals.

And how he must have been hoping expecting that Stephen Harper would make him the new Minister of Public Security.

So he could bring law and order back to our streets... 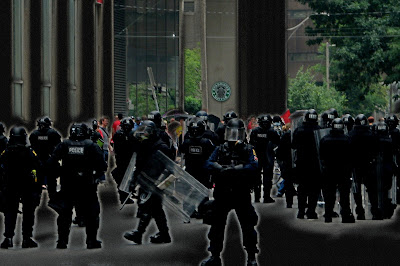 And then I see what he actually got.

Mama Mia. I can only imagine how hard it's going to be to spin that one into a triumph of the will. Even with his megalomania.

Or how humiliating it's going to be to have to press his own emergency button.

To make himself feel important. Or summon his limousine wheel chair.

And this pompous authoritarian is going to help seniors? Gimme a break. How low can you go eh?

But then I think of Peter Kent, the new Minister of Big Oil.

And how lucky he's a former news anchor. So he can memorize his lines.

And deliver them with gusto... 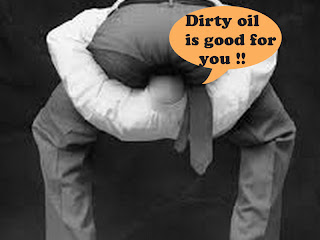 So when I read that Kent and Fantino are supposed to lead the suburban assault on downtown Toronto.

All can say is the Cons must be scraping the bottom of the sardine barrel eh?

This stinking Con government is way past due.

And of course, for those easily fooled.

First they came for the cities.

And then they came for the suburbs....

Fantino doesn't even have a department. A Minister of State is not a cabinet minister with a department but, rather, an MP asked to help develop policy in a specific area.

If he goes to a cabinet meeting, he won't be at the table but, rather, sitting in a corner and listening and speaking only when asked.

It's a Potemkin Village solution; dress him up as something important in anticipation of the next election.

The biggest stir Kent created was back in the '70s when he read the National on CBC and wore wire rimmed glasses and had over the collar long hair.

He held down the desk after Lloyd Robertson left and Knowlton Nash arrived.

Read about him in Wikipedia. It's quite a shallow career.

Potemkin Village to fool the masses--that's all it is for these two persons.

It is really not a coincidence that Fantino was chosen to deal with Seniors. Recently I have been reading right wing comentators who have said that the reason we have an economic crisis, in Health care and Pensions, is that people (like my husband and I) over 65 are living too long. I quess Harper has figured out how to deal with that little problem since there does seem to be fewer and fewer ice floes available.
I don't want to get you into any trouble so you probably should not post this comment, but I just wanted to get it off my chest.
I also want to thank you for writing this blog, I turn to it every day and it always is a good read.
Take care.

hi Torontonian...Fantino sitting in a corner and speaking only when asked? And no limo? Gosh. That's even MORE humiliating than even I had hoped for. :)
As for Peter Kent...I don't remember him as a news reader, but if he had any credibility, after being Minister of Big Oil, he can flush that down the toilet...

hi anonymous...thank you for reading my blog,don't worry about getting me into trouble, and don't listen to those who blame seniors for the economic crisis. You and your husband and all the other older Canadians deserve to be treated with dignity and respect, and I don't blame you for not trusting the Harper government. They have done nothing to make life easier for seniors, and now they are threatening to turn the CPP into some funny money system. Young and old in this country have the same problem, and I suggest we work together to get rid of it in the next election. I LOVE seniors so I would enjoy that... :)