Gabrielle Giffords and the Teabagger Terrorists 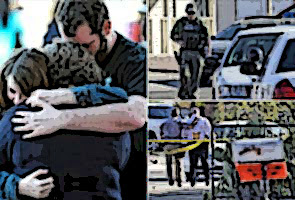 A Congresswoman is shot in the head. A judge, a nine-year-old girl, and four others are killed. Eleven people are wounded some of them critically.The madness.The horror.

Because Giffords is a Democrat, the Republicans are weeping crocodile tears, and claiming a crazy man did it.

And no doubt they are right.

But nobody can dodge responsibility for the kind of society America has become. A violent militaristic one, where racism still divides, religious fanaticism inflames the ignorant, and guns are too easy to get.

Where a mentally ill person can get hold of a powerful weapon. 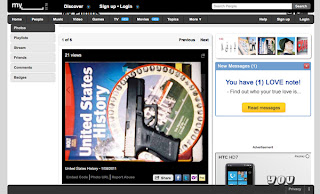 And nobody hears his cries for help. Or recognizes the danger.

"I don’t feel good: I’m ready to kill a police officer! I can say it."

Because it's just too crazy EVERYWHERE.

And the Republicans, and the tea baggers, and the right-wing-radio hosts can't dodge the responsibility for creating an atmosphere of violence. 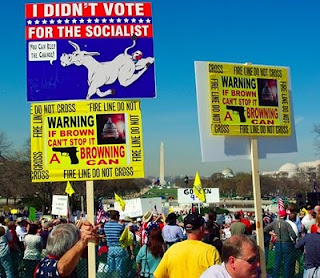 No matter how it tries, the right cannot divorce itself from the pustulence of its violent rhetoric no matter how many times its practitioners say "not me, not me" after people are murdered for taking these vile imprecations to heart. A few crocodile tears from Glenn Beck won't cut it.

Because words have consequences.

They noted that Jesse Kelly, a tea-party candidate who narrowly lost to Giffords, held a fundraiser at a shooting range in which he invited supporters to "help remove Gabrielle Giffords from office" by shooting an M16 with him. They pointed to an online map, posted by Sarah Palin, in which gun sites marked each congressional Democrat that the former Republican vice-presidential nominee wanted to defeat, along with her frequent use of shooting metaphors.

And the writing was on the wall.

Oh boy. What's happening in the United States both horrifies and scares me. But I love and admire the many good people in that country. I share their struggle against the hatemongers of the rabid right, and I want to cheer them on to victory.

So this is what I would tell them. Make those Republican teabaggers WEAR this massacre. Use it to attack them harder them ever.

Make Sarah Palin EAT this map. Over and over again.

Tell them they're not patriots they're TERRORISTS.

Tell them if the founding fathers got hold of them, they'd horsewhip them or hang them.

And above all make it clear to them that they don't speak for America.

Because you need them like you need a hole in the head.

And America is YOUR land...

Will be interesting to see if anyone in the media will make Palin eat that map. I highly doubt it, but she certainly deserves scrutiny in a very harsh way.
bcwaterboy

Simon, this comment was left at Steve V's Far and Wide blog by a commenter named, 'John'. Thought I'd drop it off here.

As an American, I have watched one party - and only one party - cater to and adopt the language of guns, warfare and violent revolution increasingly during the past two years. Not both parties . . . one party. I have watched people stand at political rallies with exposed guns in those states which allow open carrying of guns defiantly declaring that they are exercising their right to do so as guaranteed by the constitution as they put it, "to send a message." I've listed to countless politicos on the right and their fervent supporters drone on about the illegitimate (nazi, communist, fascist, socialist, muslim . . . take your pick) President they claim is out to destroy our country. I've heard them spouting countless times in word and in signs that the tree of democracy has to be sprinkled with blood sometimes. And, now, when a congresswoman is shot through the head and others lay dead including a 9-year old girl, just for participating in an open Democracy as citizens, I'm supposed to sit back, wait for the evidence, understand he was disturbed, and ignore every disturbing thing I've witnessed and heard in the period leading up to the tragedy. Well, to that I say bullshit. I didn't have to "jump to any conclusions" when this happened. I predicted it over a year ago when the teabag crowd first started spewing their hateful, racist rhetoric in public, proud to spew their ignorant rants for the world to see. Violent rhetoric ultimately leads to actual violence. History shows it always does. So I'll be damned if I'm gonna sit idly by and let the ranting ideologues get a free pass simply because they offer vague condemnations after fanning the flames for months now. The party of personal responsibility needs to step up and acknowledge there is such a thing as unintended consequences and that words are powerful and convincing. I frankly don't care that they didn't want it to happen. Their words reached a disturbed individual, who acted out their repeated musings. Anyone fueling violent rhetoric and fearful frenzy played a part in allowing this to happen . . . encouraging it to happen. And the more good people, regardless of political leaning are willing to call out those who employ drumbeats of violence to advance their political objectives, the better. The madness in the US needs to end . . . now.

hi Omar...thanks for that comment. It really is amazingly powerful. I feel the same way. I'm not saying there's a direct connection, but in a society inflamed with murderous rhetoric and awash with dangerous weapons what do we expect? Every time I see Obama working a crowd I get a chill down my spine. I hate it, it's crazy. As that commenter said it has to end now. But how can it end when the Obama administration has relaxed the gun laws even further?
Madness knows no boundaries, and the worst is still to come...

hi bcwaterboy...I like to think that Palin will be shamed into apologizing. But how can she do that when she would be apologizing for just about everything she stands for. I did hear one bit of good news though. I hear they're cancelling her reality TV show.
Thank goodness for small blessings... :)

hi Beijing...thanks. I wasn't too happy with the post myself. I wanted to say so many things but I ran out of space. One thing I could have said was thank goodness we saved the gun registry, because ANYTHING that discourages gun ownership has got to be good...