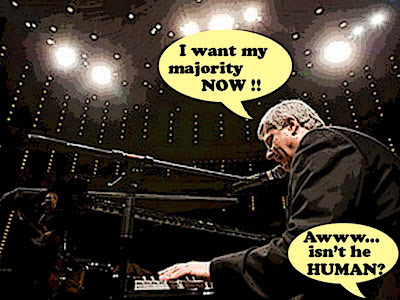 Ever since this shabby cabaret act, I have been disgusted by the number of Canadians...including some progressives... who have gone ga ga over it.

Instead of being revolted and outraged over the way this political thug hijacked an artist's gala and turned it into a vulgar campaign event.

And by so doing slapped every real and starving artist in the face.

Now I'm no artist....as you about to discover. And I realize that the awesome pale has created the ultimate video response.

But here is my humble effort...

Ok. So I had a little fun. If you know me you know I can't help myself. I need to keep up my spirits in this dark time.

But I'm also deadly serious. If Stephen Harper ever gets a majority he will use it to tear the living heart out of the Canada we love.

Don't be fooled. This fanatical ideologue doesn't have a human bone in him.

Defeat him, crush his Cons, send him back to Alberta...or piano skool.

Before he destroys our country....
Posted by Simon at 9:34 PM

You are really looking forward to the Tories being in power for the next ten years aren't you? (sarcasm) You're as happy as I was when that slimeball Chretien got himself re-elected again and again...

I think that I'm going to like the new Canada. A Tory majority won't be all that different from what we have now. (well, the gun registry will go, but that is small potatoes) Canada will continue to be a wonderful place. A place where most people have jobs, even if having a job means that they had to move out west... A place where everyone is equal, with no qualifiers. A place where freedom of speech is actually protected, even if you or I think that some of it is hateful. There are many other reasons why Canada will continue to be a wonderful place.

hi Benjamin...I don't know why but I don't think you like my video... :(
Because you're not your usual reasonable self....er...for a Conservative.
But seriously I don't know how you can say that scrapping the gun registry is a good thing. Because it's a very bad thing for police officers. Not to mention the rest of us.
But as for the other Con policies they don't really bother me as annoying and wrong as they are. I consider it a small price to pay for living in Canada at this time. But as I keep reminding you I'm from the Anyone but Harper Party. I just don't trust they guy. He's authoritarian enough...nobody in your party ever restrains him or dares say boo.
So I can only imagine what he could do with a majority. And I dare say that if that unfortunate event ever occurred he would one day shock you too. In fact I'm noting the date so that one day when you're sharing a prison cell with me I can turn to you and say
" I told you so...."

Benjamin, you're entitled to your opinion, but please don't tell us by saying a Tory majority won't be much different than what we have today.
Stevie with a majority can cause sooo much damage, we wouldn't recognize Canada inside a year: it resemble more like the states.
I for one don't want to see people toting guns on the streets, Abortion would be criminalized, we'd lose our universal health care system, war in Afghanistan prolonged,the gay marriage legislations would be reversed, etc.
NOw probably all good stuff to you, but....absolutely frightening to the rest of us; even most centrists I imagine.

Cool video, Simon, damn, I wish I knew how to edit videos like you guys can!

Hi CK...I'm glad you like the video. I had quite a lot of fun making it... :)
You should try it...it's not that hard. I mean I have a disorganized artistic mind not a practical mechanical one, so if I can stumble my way through the basics I'm sure you can too...

Please, please Mr. Harper! Give up your day job!