The Liberals: Between Denial and Insanity 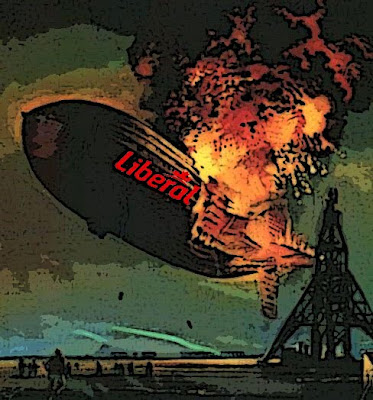 OK look enough is enough. Ever since I announced that I have decided to save the Liberal Party... from itself..... I have tried to be as positive as possible.

But when does denial become insanity? And why are Liberal bloggers STILL demanding the NDP help bring down the government?

That is why we believe the time has come to vote the Tory government out of government and have an election so that Canadians can get the government they really need.

When the brutal fact is the Liberals are going down like the Hindenburg, and an election at this time could be a disaster that gives Harper the majority he needs to carve up this country like a turkey.

As this latest poll proves.

From the La Presse article:

The Liberal Party finds itself with the same score Mr Dion obtained last year. Mr Ignatieff peaked in April when he made a series of speeches in Quebec and demonstrated a certain opening. People at that time were charmed. But he's been losing support ever since.

Every portrait needs a frame and Liberals had none for Ignatieff...should Ignatieff fail, blame will rest squarely on deluded Liberals who persuaded themselves that returning to power was inevitable and no more demanding than a beauty pageant.

Because if you don't you'll soon be looking for a MORTICIAN.

The sad unavoidable truth is that something has gone terribly wrong with Ignatieff's campaign, and until they figure out what that is, the Liberals should simply attack the Harper government, and stop bugging the NDP to bring it down.

On Ignatieff's head. And Canada's.

Don Martin has some suggestions.

And I have one too. Enough with the wimpy ads and start hammering the government mercilessly with the most aggressive attack ads Canada has ever seen.

Not just attacking the Cons miserable record, but also casting doubts on what they would do with a majority. Because if you are going to show what you can do BETTER you have to show what the Cons could do WORSE. The Liberals put the cart before the horse, and now they're paying for it big time.

And if they can't figure out what WORSE means may I please help? By suggesting something like this: 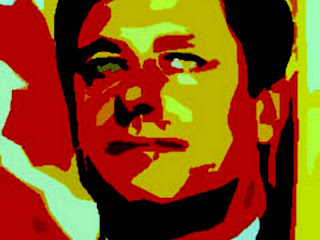 Stephen Harper is planning to destroy medicare, because he's tried to do that since he came into politics. He wants to kill the CBC and other Canadian institutions because he hates Canada so much. He wants to destroy the gun registry and flood our streets with guns so criminals can kill police officers and other innocent people.

He wants to criminalize abortion and get rid of gay marriage because his government is crawling with sinister theocons who hate women and gays with a passion. He hates government so much even our old age pensions aren't safe. Because he loves Alberta more than Canada, he's allowing Big Oil to destroy our manufacturing sector, and take food out of the mouths of children in Eastern Canada.

He's torching our planet so our grandchildren will starve. He wants to change Canada into a frightening place we won't even recognize. Because this angry ideologue,who takes his orders from God, is pretty frightening himself. With all his multiple personalities you never know who your dealing with: Kitten Man or the Majority Monster. How could we EVER trust him?

Don't we deserve better than that?

Golly. And that's just for starters. As Tom Flanagan says it doesn't have to be true, it just has to be plausible eh?

Plausible enough for you? Glad to be of service.

It makes no sense to me--collective insanity. The Libs should be sending flowers to the NDP, which clearly doesn't believe in assisted suicide.

As Tom Flanagan says it doesn't have to be true, it just has to be plausible eh?

In one of his early elections in Texas, LBJ told his campaign manager that he wanted him to start a rumour that Johnson's opponent had been arrested for committing beastiality with a pig.

"We can't say THAT! It's not TRUE!" said his campaign manager, aghast.

"That is why we believe the time has come to vote the Tory government out of government and have an election so that Canadians can get the government they really need."

Really, Simon? You call that a "thoughtful blogger"? I call that an arrogant sense of entitlement, 'coz what the phrase "Canadians can get the government they really need" translates as is "Liberal".

Despite the fact that Ignasty has offered NO policy options that are substantively different than what Harper has been doing. Despite the fact that the Dion Liberals (and now the Ignasty Liberals) have voted along with the Harpokons almost 80 times, in return for NOTHING.

No, no, ignore all that, "puzzled cat" seems to say... we need an election so that we can install the Natural Governing Party back into the place it really, really ought to be in, just... because. Because it's our right as Liberals.

Pardon me, but screw that arrogant shit. I even demand rational logic from the NDP,, so I sure ain't gonna accept "just because" from the LIBERALS. (As much as I disagree with the Harpokons on virtually *everything*, I sure agree with their withering contempt of the Liberals over their irritating sense of entitlement.)

Personally, I'm thrilled that the NDP is supporting the government. Let them wear it for a while.

And while I agree that the current "Happy Iggy" ads blow, we already tried the "Scary Harper" ads two elections ago and they backfired big time. Remember?

Me, I'm just counting the days until the next Liberal leadership convention.

hi Dr Dawg...I understand why the Liberals are eager to go. Who doesn't want these Cons swept into the garbage can of history. But all I'm saying is that Harper is flying high right now, the Liberals have not prepared the ground having taken the summer off, so wait a couple of months and then strike.
And in the meantime they should concentrate on attacking Harper not the NDP. Because that's RIDICULOUS...

hi 'berto...ha ha ha... I love it. And I really would like to see Harper try to say he wouldn't hurt medicare after the record he has. It's the doubt that counts, that festers in the mind, and forces people to hesitate.
And every one of those suggestions I made IS plausible....

hi 'berto...actually the Cat is a pretty fair blogger. And I was very impressed with his arguments during the Coalition crisis.
And everything he says is true. The Harper government is bad for Canada.
But the point I'm trying to make is that a Harper majority would be WORSE...
And judging by all the polls now is NOT the time to go...

hi Jennifer...good for you. It's not as if the NDP is enjoying its present role. But delaying defeating the government will give them more time to raise money, and give the Liberals more time to refine their message.
As for the attack ads I don't think you can compare what happened two years ago to the situation we have now.
Back then the Liberals were saddled with Dion, and those attack ads were too tame to count. But still I think helped prevent a Harper majority.
For example, one of the biggest problem progressives face today is that as the population ages a lot of seniors are going Conservative.
They naturally want stability, law and order, etc etc. So if you run ads that suggest that Harper wants to radically CHANGE Canada...and destroy medicare... I think you can persuade some of them not to go blue.
I wish it wasn't so, but the Harperites have used attack ads to great effect and I think it's time to give them a taste of their own medicine.
We are better than them, but since Canada's future is on the line I suggest we pullout all the stops...

Sadly, it was an ad that was rejected (the "troops in the streets" ad) that outraged people when it was revealed and convinced them we were fear-mongering. Of course all the ones that DID air have been borne out by subsequent events.

hi Jennifer...I remember that campaign too. And it wasn't very good...especially the troops in the street one...which cast the others in a bad light.
But still wasn't it also credited with preventing Harper with getting a majority. Or was it the one when the Harperites branded Martin a child pornographer. Because that one sure backfired. ;)
But seriously...I think that when the country is saddled with a huge deficit, it is legitimate to ask whether we can trust Harper with medicare, considering his record.
And the same goes for the American-style theocons working in his inner circle. Can we really trust them not to dictate policy if they got a majority?
I wish that the progressive parties could inspire me with a new and creative vision of Canada, something exciting and different.
But in the meantime I think the only sensible thing to do is raise doubts about what Harper might do with a majority.
Because it HAS worked before, and in these dark days I can't think of anything else... :)