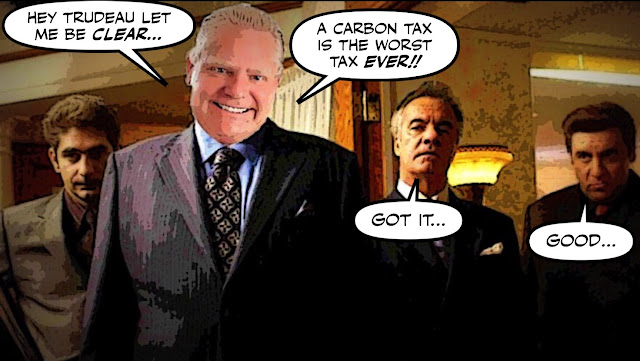 Ever since he came to power Doug Ford has launched one attack after the other on the Liberal government's carbon tax. As only a political thug and a Con clown could.

He calls it the "worst tax ever." He is spending $30 million dollars to challenge it in court.

Even though it is the best way to fight climate change, which Ford doesn't really believe in either.

And now even as massive floods are threatening communities all over Ontario.


Drone footage over Chaudière Falls along the Ottawa River today. This is only the second time in our 100+ year history that we've opened up all the spans of the Ring Dam. #ottflood pic.twitter.com/CWZiqK8nOL
— Hydro Ottawa (@hydroottawa) April 27, 2019


And Ford is out there helping to fill up sand bags, and sweating like a pig.

He STILL doesn't get it.

Asked if climate change is responsible for the flooding in eastern Ontario, Premier Doug Ford said "something's going on and we have to be conscious of it." Read more: https://t.co/W6nuJYYV96 pic.twitter.com/M4yngM5Opm
— CTV News (@CTVNews) April 26, 2019

The cost of keeping a global temperature rise this century to within 2 C above pre-industrial levels to meet the UN Paris Agreement has been estimated to cost the world economy $600 trillion US. But rapid changes in the Arctic could push that figure even higher.

And of course neither do his buddies in the anti-carbon tax gang, who are also willing to sacrifice the future of young Canadians in the name of human greed.

Even though as I pointed out the other day, those grubby Cons are being made to look like idiots. The universe is unfolding just as I thought it would.

The massive floods of spring will almost certainly be followed by the massive fires of summer, as Canada warms up twice as fast as other places. 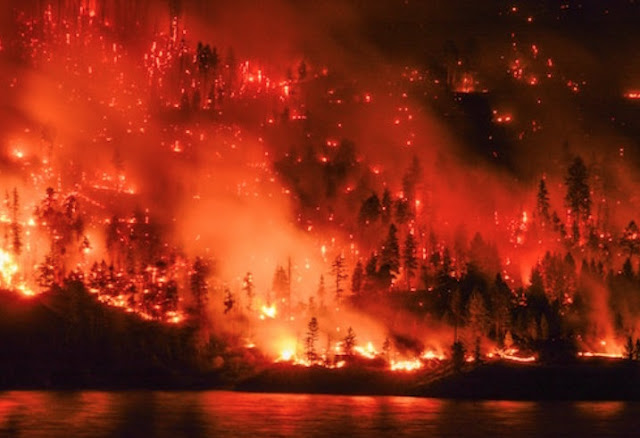 Climate change will become the issue it should have been long ago.

Doug Ford will look even more criminally irresponsible than he does now... 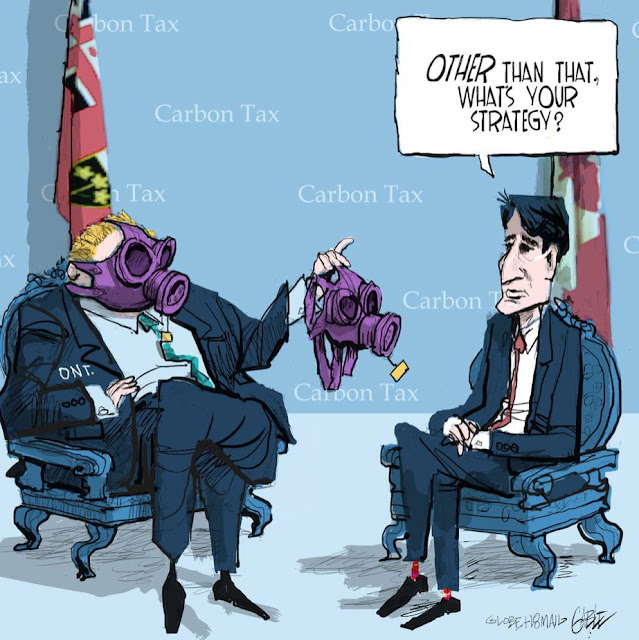 Or even dumber, if that's possible.

And in the fall, the leader who led the fight against climate change in Canada will be re-elected prime minister... 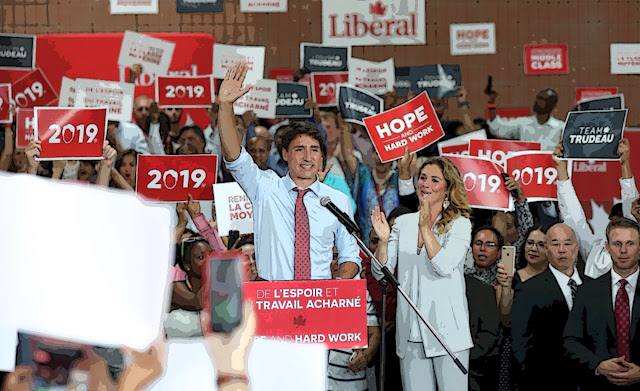 It will have been a brutal struggle against ignorance and greed.

But as I always said, with Mother Nature on our side anything is possible...

Your keyboard to St Pierre's ears, Simon. ABC. I've been there and done that down here in 2016, and I don't trust the M$M not to be in the bag for Trump North, or the low-info voter not to be duped by "Canada Proud" Koch agitprop, leftover hostility over the fake scandal, and their own Trudeau Derangement Syndrome blinders. The hatred people have for this man is palpable, personal, and irrational. I only hope that as a long shot the outrage people have about Ford's cruelty and ignorance of the #1 existential crisis facing humanity is enough to continue and bolster the longtime Ontario tradition of voting for a PM from the opposite party of the premier in power.

At the very least, I'm praying that people will wake up and see that "the other guy" is worse and you have a repeat of 1972, instead of a 1979 with someone who is a lot sleazier and backed by a lot more powerful and ruthless villains, and who could do a lot more damage even in minority, than poor, hapless Joe Clark. Far worse would be a repeat of '84, as Reform By Any Other Name is not your father's PCs and the 4chan-courting, climate-denialist candidate Scheer is no Mandela-supporting, acid-rain-treaty-introducing Muldoon.

I just checked the CBC poll tracker. On average they're down 3. The Cons went from a high of 38% confidence projection of winning a majority to only 23%. The same statistical probability that the Tru Grits can win a minority. As of right now the Cons have a 32% chance at a minority. The odds are shifting around and I hope a miracle is possible if the Tru Grits run a good campaign.

They're ahead in Quebec and the Atlantic and slightly so (37-36) in Ontario. The prairie hicks were always going to be a washout. But they've been hardest hit in British Columbia (fuck you, Jody) where the Cons are ahead by 4. If it wasn't for fucking vote-splitting among the Greens and NDP, they'd be neck-and-neck if not ahead.

This is why I'm hoping and praying that he can win back support out there by standing up to Kenney during what is likely to be a hot and sticky summer. He needs to get back B.C. and I hope and pray that he can.

Another example of Dougie math, sabotage the future in exchange for glorifying the past! http://behindthenumbers.ca/2018/10/16/ontario-cap-and-trade-cancellation/

Buying an old pipeline for $4B to double Tar Sand bitumen exports to save 2 seats in Alberta was idiotic and will cost him seats in BC and elsewhere across the country. That is his greatest self inflicted wound IMHO

Ignore the polls. They are not predictive. Six months before the 2011 election the Ignatief lead Liberals were leading the Harper lead Conservatives. We all know how that ended.

On the day the writ was dropped in 2006 I read a banner headline on the front page of the Ottawa Citizen that stated "Liberals Heading to a Majority Government: Poll". Again we all know how that ended.

Then in 2015 the Liberals were in third place when the writ was dropped. All of the professional political pundits were calling for a Harper minority with a larger NDP Opposition. On the day the writ was dropped I wrote on my blog that the Liberals would win a majority government. My greatest pleasure on election night in 2015, besides the result, was watching all of the paid pundits trying to backpedal their election predictions.

Finally, two days before the 2016 American elections all of the polls said that Ms. Clinton was on her way to becoming president of the US. We all know how that turned out.

The pipeline is not universally disliked in BC. If the polls are to be believed the Liberals and Conservatives are ahead in that province and both support building the pipeline. If the pipeline was as unpopular as some would have us believe the NDP and the Greens would be running away with that province.

Otherwise, the only place where pipelines will be the ballot question will be in Alberta, and maybe parts of Saskatchewan. For the rest of the country it will be the usual things like the economy.

The biggest threat to the Liberals is not pipelines, the carbon tax, or Mr. Scheer. It is an ill time economic slowdown between now and election day.

The pipeline was in support of Notley and an agreement to institute a climate action plan, put a cap on oil sands production and further diversify Alberta's economy. That all came crashing down thanks to Trump and his Saudi buddies scaling up oil production in exchange for putting Iran in its place. Due to European push back the Iranian embargo took months longer than planned to implement and the resulting oversupply and price squeeze left the door open to Kenney and empty promises of past grandeur. It was a decent plan but as they say timing is everything! Kenney, like Dougie will scrap Alberta's climate plan regardless of cost for the honor of squaring off against the Liberals. I suspect the Liberals will continue to support the pipeline but at a much lower priority than if Notley had remained in power. As a yardstick, Harper's signature Keystone XL is still tied up in US courts even with the orange oaf at the helm. Dictatorial antagonistic approaches seem to work best in autocratic countries, in spite of the Cons best efforts we are just not there yet!

I just thought of something: is anyone else having déjà vu about Hurricane Katrina? George W. Ford, because it's 2005.