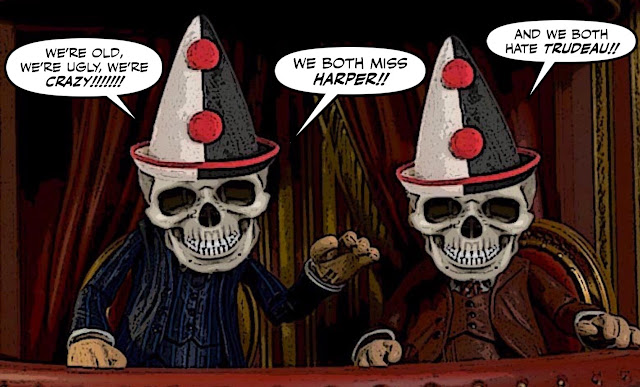 I don't know why there are so many toxic Trudeau haters out there.

So many angry old men who seem to hate our prime minister more than they love life.

But the grumpy old Con who went after Justin Trudeau as he was filling sand bags near Ottawa yesterday, not only showed no respect for the office of prime minister.

He set off another toxic chain reaction of hatred, of the kind that is poisoning this country.


With Lisa Raitt using the story to attack Trudeau in her usual manner.

Photo op issue aside - for me it’s how he treats the volunteer that shows his character. Zero compassion from this spoiled PM. It’s all about him. https://t.co/tfNuWDhdaT
— Lisa Raitt (@lraitt) April 27, 2019


Because as we all we all know she simply can't control herself.

As did the toxic Trudeau hater Warren Kinsella.


Who as we all know, can't seem to restrain himself either.

And to make matters even more absurd,  Ben Harper, the son of Stephen, also weighed in with this lame tweet.

How long until the Liberal Party starts trying to associate the volunteer with white supremacy? https://t.co/4VY7ffuoCH
— Ben Harper (@Ben_S_Harper) April 27, 2019


Even though David Akin who actually lives near that flooded area, pointed out that the grumpy old geezer was talking through his hat. And making it up as he went along.

And so did the RCMP.

Which made me wonder whether I had seen that grumpy old Con before... 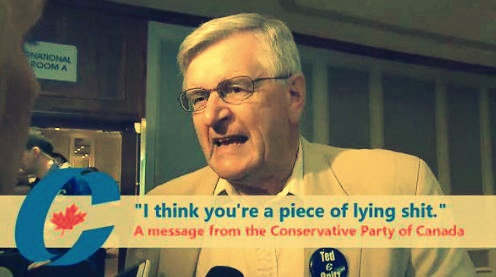 Or wonder again why there seem to be so many of them, poisoning our country with their frothy bile.

You know, I've always tried to treat seniors with respect, and I enjoy their company.

But as for the angry old Cons of this country, they can't drop dead soon enough.

And I look forward to the day, when we can build a better Canada without them...

Looks like Scumbag Steve raised his boy to be as much of a POS as he is. As for that sadistic old coot, he should be charged with child abuse for terrorizing Justin's kids as he viciously barked at their dad. Especially the little one. Hadrien is 4, just going out with dad and his big brother Xavier to help people whose neighborhood had been flooded. Flooded, it should be noted, by (cough cough) the effects of CLIMATE CHANGE, the elephant in the room that the other pachyderm, Doug the sandbag in his sloppy grey sweatsuit, won't do a damn thing to address!

These savages have no shame. Yet they have the nerve to claim Liberals, Trudeau in particular, don't care about children. It always baffles me as to why anyone would ever want to go into politics at all, but I'm particularly disappointed, disgusted and shocked by the abhorrent state of politics in what I'd always been told was a polite and friendly country. What Justin Trudeau is doing, what he is teaching his boys by real-world example and what Justin and his brothers learned at Pierre's side, is called public service. But the more I see of "politics" and the disgraceful behavior and selfish attitudes of the electorate, the more I'm convinced that the profession is anathema to just that. What an ungrateful shitbag that heckler is. Churchill was right: the best argument against democracy is a 10-minute encounter with the average voter.

It would be interesting to know who this disrespectful moron is and given David Akin lives in the area, maybe he will shed more light on this. His tweet was welcomed and appropriate. I've done my fair share of sandbagging through the years and have never encountered such a dour, spiteful person because people like him are not welcome. He serves only to drag other people down and make a bad situation worse. As I said before, the attitude this idiot displayed is not conducive in getting help quicker, on the contrary, the person directing our soldiers(myself included) would be more apt to send the help to appreciative, respectful homeowners. A non verbal way of saying "f*ck you asshole, better turn on your dehumidifier". So instead of thanking the PM for sending in troops to help, this asshole takes a fit. Hmmm. Sounds like something the Cons would stage to try and embarrass JT. Or as you say, Simon, just another cranky old Trudeau hater blaming all his shortcomings on the Trudeaus instead of where it belongs, the man in the mirror.
Raitt's tweet is no surprise, petty, ugly and divisive like the hag herself. Herr Harper jr.'s tweet is rather odd in that he would bring up white supremacy. Is it because he could be a poster child for the ss? Trying to distance himself from something? No more Heil Harper's when greeting daddy? Bizarre.
Regardless of what or who motivated the pissy old prick, there is one common denominator in all of this. He is a symptom of the disease Harper and Scheer have cultivated since JT first ran for office. They want people to not embrace the Consrvatives because of, ahem, sound policies, rather, they want the embrace due to their relentless lies and attacks on JT. They want people to despise him and in the case of these bitter old fools and unhinged rednecks, it's working. In fact, it's working so well that the Trudeau family regularly receive death threats with some directed at their children.
Welcome to the Con world of gutter politics. The lowest form of human scum infecting a populace with rage and hate. A bitter harvest nurtured by the most despicable incarnation of the right this country has ever seen. Take a bow Harper, take a bow Scheer. I hope and pray that one day you will reap what you sow.
JD

Maybe he would have been happier had Trudeau tossed out paper towel rolls ala Trump?

Angry old (and young)cons are nothing new, what is new is that MSM elevates it into The Story. Instead of promoting the involvement of political leaders and encouraging the public to do the same they turn it into a negative where its only an unimportant photo op for a self serving politician and besides the victims appear to be ungrateful aholes so why bother helping as the two groups deserve each other. Is the media promoting this type of negative social fabric destroying news as a revenue per click strategy or to promote anti Trudeau propaganda? In either case the best strategy is to refuse to click on this type of National Enquirer type news that once was reserved for the check out line until self serve came along. With a little resolve this type of headline grabber news is easy to spot and ignore.

The knot that guy had worked himself into had to have been over something more than whatever inconvenience to the project Trudeau’s presence might have caused, which apparently didn’t amount to much. My guess is that he just didn’t like it that Trudeau was there. In any case, Justin provided a response.

And I’ll politely ask Ben Harper to give us all a break. His dad at best would have looked the other way while waiting for his cheering section to start a chant.

“WEST KELOWNA – For a second straight day, firefighting efforts at the Westside Road fire were the backdrop for political photo ops.

“Handlers for the federal and provincial leaders promised reporters a chance to ask questions but B.C. Premier and local MLA Christy Clark answered only two, while … Prime Minister [Harper] declined to answer all but one question. …

“After more than an hour wait, the press conference was over after less than five minutes. The Prime Minister would not take questions about why he was there, how much time the photo opportunity took from firefighters or what resources were used in the photo effort.

“A federal election is less than three months away.”

In Kelowna, BC today with @christyclarkbc to survey first-hand the damage caused by the recent wildfires. pic.twitter.com/wHgPVtoXSA

I do exactly as you describe.

They are looking for anything to try to confine Trudeau to his office.
None of them objected to Rob Ford showing up at various sites. So what is this really all about? It is not unusual for politicians to show up at emergencies and do photo ops because it does draw attention to the seriousness of the situation and assists in fund raising.
omg, why can't these people, find something else to complain about. If

I were to complain about the federal Liberals, there are more serious things to look at than a photo op. If nothing else, it says more about them than Trudeau, Hey no complaints about Ford, only Trudeau????????????Scheer is most likely too afraid of the water

Hi Jackie.
Re: "what I'd always been told was a polite and friendly country."

It is. It is.
(At least it is in my environs. I hope but can't speak for small town/rural Ontario).
For instance, in all my years as a commuter on public transit in Toronto, then in the greater GTA, rubbing shoulders (literally!) with all the cultures and complexions that came our way and comprise the Canadian mosaic, nothing has changed in that way. It is as ever it was. Compared to my experience vacationing in Italy, for example, being pushed and shoved and elbowed out of the way, every one for oneself; here, no matter where they come from, all are courteous and polite and wait their turn and even offer their seat, etc. Reflect that typical proverbial Canadian niceness..the cliched "You step on my toe, I say excuse me." They adopt our quiet ways; we do not change. Yet we didn't insist or breast-beat about it--it just naturally came about.

Disasters attract politicians like crap attracts flies. I would have liked Mr. Trudeau to be different. What I would have liked him to do is to show up, at 8:00am, with only two Mounties of his security detail and one of his staffers, who has a mobile phone, since the PM cannot be totally out of touch. Go to the person in charge and ask them what needs to be done. Regardless of the job offered go do it and do it for a solid 8 hours. Refuse to talk politics. "I am here to work." Crack open a cold one with his co-workers after his day is done. Afterwards, say his goodbyes, get back into his car and go home. No fanfare, no entourage, no media, although they would show up on their own eventually but could be kept away for health and safety reasons. That would impress me and alot of other people more than a the token effort most PMs make. It would also make any angry old white guys who bitch at him look like asses.

P.S.
Further to your Churchill quote, Jackie, if I may, I would play on his famous Democracy quote:

These attacks are so unfair, I wish someone bigger than Simon would step up. Every politician goes to a distater scene, disaster is not political. Or never was. Next is flying in a jet, now the cons are saying why does Justin fly in a jet? Bullshit baffles brains, and the MSM is going full bullshit on this.

Now, here's a headline I like:
(Doesn't mean I trust it)

Any proof that the person who confronted the PM was a Con, besides the latest Liberal talking points?? Of course you don't.