Donald Trump and the Women Who Brought Him Down 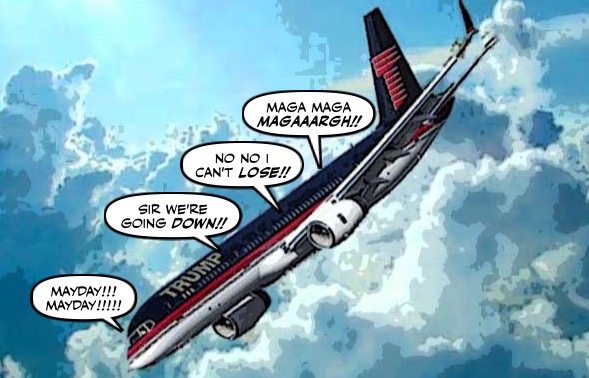 With only fifteen days to go before the U.S. election, if we were on a plane this would be about the time when the pilot announces "we're now on final approach."

Or if you're on the Trump plane the pilot screams "Mayday!! Mayday!! Only God can save us!!!!

Hillary Clinton has vaulted to a double-digit advantage in the inaugural ABC News 2016 election tracking poll, boosted by broad disapproval of Donald Trump on two controversial issues: His treatment of women and his reluctance to endorse the election’s legitimacy.

Unless you're Donald Trump of course, who is still screaming "MAGA!!! MAGA!!! My campaign is not nosediving!!!!" 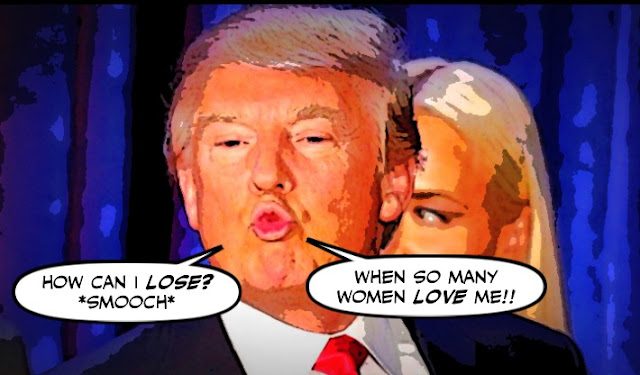 And claiming in his final stage of delirium or desperation, that even though the election is rigged he's STILL going to win. And that he's doing especially well with women.

Donald Trump on Sunday insisted that he remains competitive in the polls, particularly with women, even as a host of recent surveys show the Republican nominee’s numbers plummeting.

So we’re setting records with men. But I want to set records with women. I hate to tell the men this, but if I could swap, I’d swap you out so fast, you have no idea how fast.”

And while I'm sure that Trump would swap the men for all the women he can get.

I'm glad that Margaret Atwood is reminding people that his campaign, and his vision of America, strongly resemble her dystopian novel the Hand Maid's Tale. 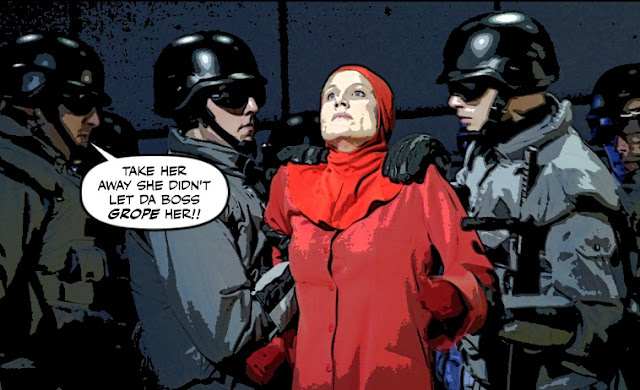 Trump has brought out a huge pushback that was originally against immigrants. Now it has shifted to being very misogynistic, partly because of Hillary Clinton. You have not seen anything like this since the 17th-century witchhunts, quite frankly.”

Basically, it’s very close to being a manifestation of a mob: burn them at the stake, screaming and yelling.”

And that a Trump Maid's Tale would be a nightmare for women, who would be deprived by that monstrous misogynist of the legal right to have an abortion.

And I'm also glad Atwood is also reminding them that Trump, in addition to his many other flaws, is a bully and a whiner.

“I tell you this,” she continues. “Hillary Clinton is a better man than Trump. She has more connection to the traditional male virtues. She has comported herself in a much more manly fashion. Ask any real alpha males that you’ll know and they’ll say of Trump, ‘This is the guy we didn’t like at school because he was a bully, but as soon as anyone pushed back at him he started to whine.’”

Or as I and others would say, just a big baby...

And the best news, or the most wonderful irony?

And helped make Hillary Clinton, the only adult in the room, or the race.

The first female president of the United States of America... 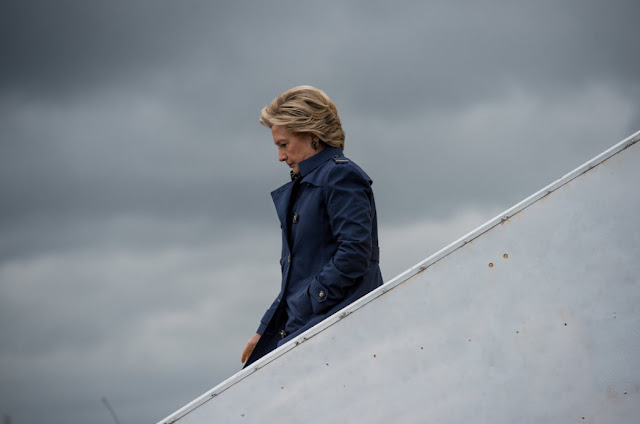 It can't get better than that.

And in Raleigh, North Carolina yesterday.

The women were already celebrating...


And you can be sure that in just fifteen days, I will be joining them...

Donald Trump: all the sexist things he said

ACOSTA: For Trump, the polls are now part of the conspiracy to deny him the White House, or as he described it roughly seven times in one minute, a rigged system.

KELLYANNE CONWAY, TRUMP CAMPAIGN MANAGER: We are behind.

ACOSTA: Trump campaign manager, Kellyanne Conway, conceded what aides say privately. Trump will have to come from behind to win.

A Modest Proposal for Preventing the Children of Poor People From Being a Burthen to Their Parents or Country, and for Making Them Beneficial to the Publick,[1] commonly referred to as A Modest Proposal, is a Juvenalian satirical essay written and published anonymously by Jonathan Swift in 1729. Swift suggests that the impoverished Irish might ease their economic troubles by selling their children as food for rich gentlemen and ladies. This satirical hyperbole mocks heartless attitudes towards the poor, as well as British policy toward the Irish in general. In English writing, the phrase "a modest proposal" is now conventionally an allusion to this style of straight-faced satire.

Loved Elizabeth Warren at the rally with Clinton!