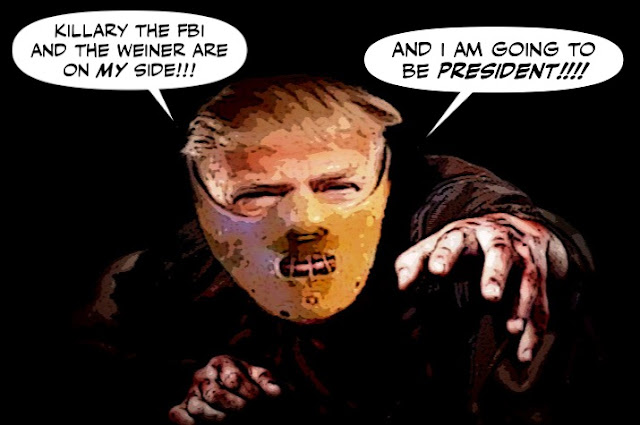 OK. Now it really is a horror show, and a living nightmare, just as I predicted.

With only ten days to go before the American election, and Donald Trump closing in on Hillary Clinton.

Clinton gets mugged by the FBI, dragged into another episode of her never ending e-mail scandal.

And yes, it doesn't get any worse than this... 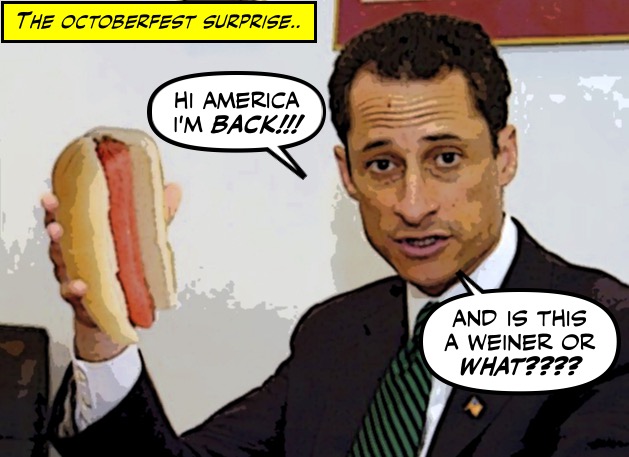 Another batch of e-mails is found on the laptop of another heavy breather, the compulsive  sexter and alleged pervert Anthony Weiner.

The presidential campaign was rocked on Friday after federal law enforcement officials said that emails pertinent to the closed investigation into Hillary Clinton’s private email server were discovered on a computer belonging to Anthony D. Weiner, the estranged husband of a top Clinton aide.

The Clinton campaign is now demanding that the FBI director James Comey stop trying to rig the election.

“We are calling on the F.B.I. to release all the information that it has,” Mrs. Clinton said adamantly in an evening news conference that took issue with Mr. Comey for making the disclosure so close to the election. “Let’s get it out.”

Comey is on the defensive.

By late Friday, Mr. Comey felt it necessary to further explain his actions in an email to F.B.I. employees in which he acknowledged that “there is significant risk of being misunderstood.” He explained that he was trying to balance the obligation he felt to tell Congress that the investigation he had said was completed was continuing, with not knowing yet “the significance of this newly discovered collection of emails.”

“The F.B.I. has a history of extreme caution near Election Day so as not to influence the results,” Senator Dianne Feinstein, Democrat of California, said in a statement. “Today’s break from that tradition is appalling.”

An emboldened Mr. Trump seized on the F.B.I. action on Friday at his rally in New Hampshire. To cheers of “lock her up” from his supporters, Mr. Trump said: “Hillary Clinton’s corruption is on a scale we have never seen before. We must not let her take her criminal scheme into the Oval Office.”

His deplorables make plans for Hillary... 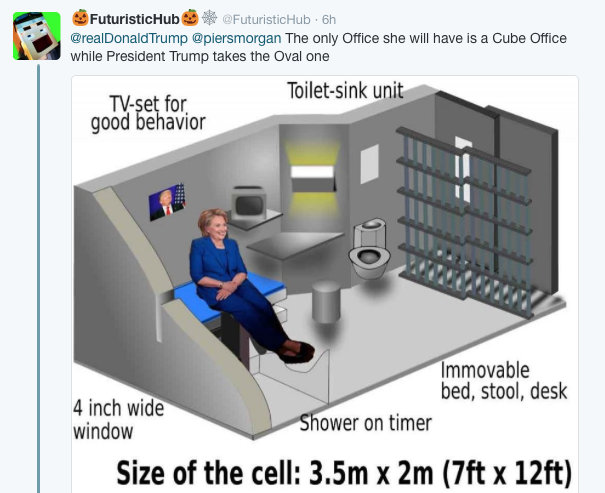 And we are left to ponder the horrifying possibility that this nothing burger scandal could make the orange green maniac President... 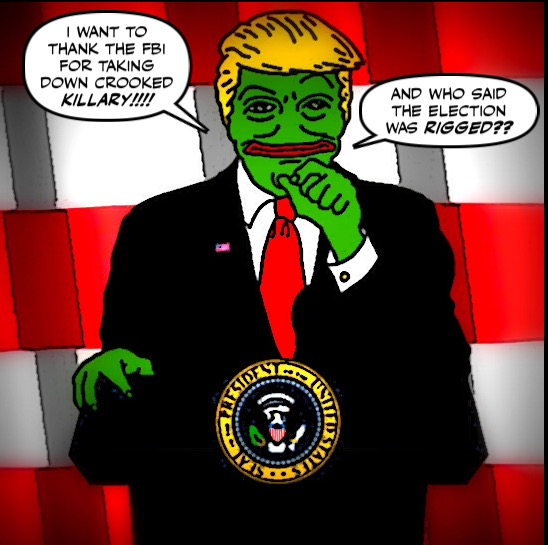 But while the news definitely threatened to ruin my weekend, and my first thought was something like this...


I've got to get out of here, finish building my bomb shelter deep in the Scottish highlands. And stock up on canned food, or learn how to stalk and kill sheep.

I don't think this mini scandal will make Trump president.

For as the well known pollster Nate Silver writes, when Comey first intervened in the election by clearing Clinton of any charges, but chastising her for acting in a reckless manner, it didn't do her much damage.

That announcement brought the story back into the news and preceded a 2-percentage-point drop for Clinton in national polls, although there was no obvious gain for Trump — instead, voters retreated into the undecided column.

The situation has since changed. Trump has been revealed to be a sexual predator.

Weiner who only groped himself, could actually save Hillary by attracting this kind of coverage... 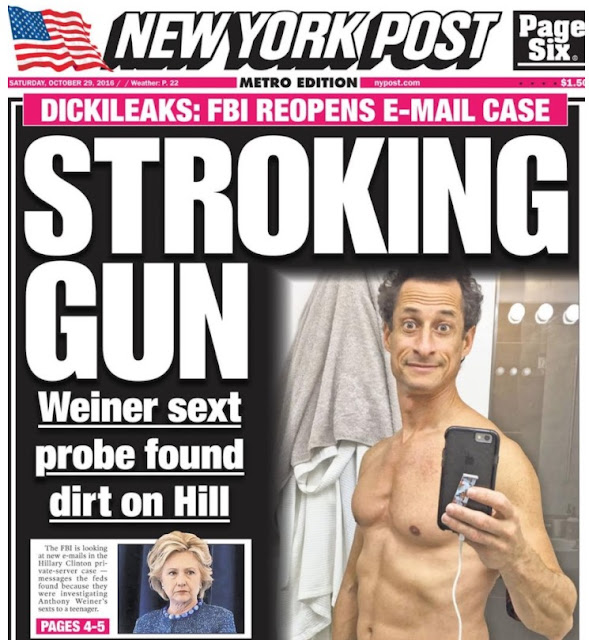 My hunch (like The Washington Post’s Dave Weigel’s) is that Weiner is such a tragicomic figure, and such a lightning rod for news coverage, that he could insulate Clinton from some of the fallout she might have suffered otherwise. There are also fewer undecided voters now than there were in July, voter choices are more locked in, and many people have already voted — which could lessen the impact.

And the election campaign has been so crazy, a little more craziness probably won't change many minds. As Bill Maher makes clear here.

“So, I don’t know what they’re going to find, and I don’t care. She’s got a server in her basement,” Maher said. “I don’t care if she’s got Jonbenet Ramsey in her basement I’m still not voting for Donald Trump!”

So there's no reason to panic, and we should all try to look on the bright side eh?

Halloween is going to go on FOREVER !!!! 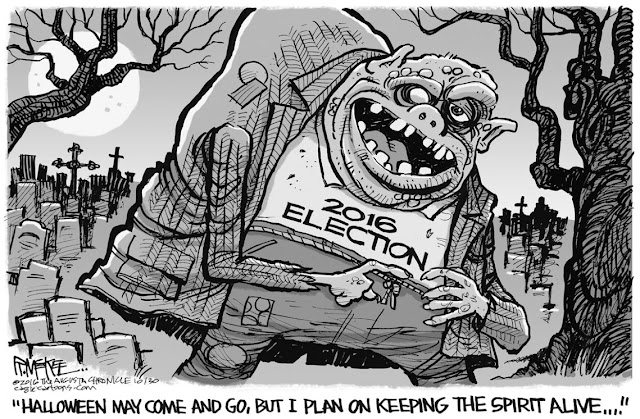 Who can deny that it was a great horror show?

And yes, it will have a happy ending.

It may be a scary time.

But the monster is still going down...

I've got to get out of here, finish building my bomb shelter deep in the Scottish highlands.

Things are not looking good in the UK. Another retailer has raised price of Marmite.

You might to consider the Falklands but I remember someone moving there in about 1978 to avoid the possibility of war in the Northern Hemisphere.

Weren't you the guy who said brexit wasn't going to win? Get your bags packed, that new life in Scotland is right around the corner.

I doubt it will have much effect on the outcome of the election. Hillary may have skeletons in her closet, but Trump has a basement full of them. He is the epitome of scum. A douchebag extraordinaire. He will lose and I hope he loses big.
JD

im so glad to see that you, too, are human, simon. but don't despair and, please very much, don't leave. Canada needs people who center themselves around decency, compassion and service. and if that's true now, imagine how true it would be under thedonald - the hegemon.

'member when we were fed bogus nonsense about how tight the polls were between JT and thestevie? in the end, there was a landslide victory in favour of humanity and good will. people aren't stupid. anywhere, even in emerika. just emotional and overwhelmed.

i agree with JD - thedonald's basement is full of bones and knowing how woefully undisciplined thedonald is, it wouldn't surprise me if he found a way to trip his own self. again. these ARE desperate times and we've seen thedonald at ease. now imagine him desperate... he still has many unscripted opportunities to F himself up. and he will take them.
staystrong. gonowhere. weluvu.

Chickens comming home to roost. Hillary is well deserved toast. We should have had Bernie. The only chance is for her to stop down, make Bernie the canditate.

hi jrkrideau....Yes, I see the Great Marmite Crisis continues, and a few weeks ago when the giant supermarket chain Tesco pulled it from its shelves, I had to call my family in Scotland and ask if I had to send an emergency shipment. However, thanks to the crisis, I did learn that the Queen likes marmite on her mushrooms. So I tried that and it was delicious. And as for my highland bomb shelter, unfortunately we have not yet been able to move the Faslane nuclear submarine base near Glasgow somewhere else, and Scotland is a very small country, but at least I'll go down with my hairy ancestors... ;)

hi anon...yes I probably did think that Brexit was going to be defeated. But I hadn't realized how many Con mouth breathers there were in Britain, the ones who had no idea what they were voting for, and now wish they had voted to remain. So who can blame me? I like to think that the Cons are evolving, but I am constantly disappointed...

hi JD...I hope it won't have any effect on the election, but I see some national polls now have only a two point difference between Clinton and Trump. And with the way the Republicans have gerrymandered electoral boundaries, and their plans to try to intimidate voters, and suppress the vote, I am truly worried that the orange clown might win. Who knew there were so many dumb people in America? And god help us all...

hi Steve...if she did step down after winning the election, Tim Kaine would replace her, not Bernie, unfortunately. But hopefully those latest e-mails won't make a difference, so she can be president, and Bernie can become the chairman of the Senate finance committee, and he can push Clinton in the direction I desire, while continuing his revolution. Steve please understand this before it's too late. Only progressives can make a revolution, and your man Trump is a fascist....

the Queen likes marmite on her mushrooms

Sautéed mushrooms? Details, details, I have mushrooms on the kitchen counter as I type.

Marmite on mushrooms, interesting and I'm a good royalist.

I need to buy another jar of Marmite and start experimenting. I bought a jar last year and discovered it really was good on home-made bread. +1 for British cuisine. I knew British cuisine must have more than just the magnificent "Great British Breakfast". Oh, and Scottish beef and pâtés. It's amazing how much better one eats north of the Border.

It's a bit far north, even in Scottish terms but check out the Orkney Islands. IIRC there are some prehistoric sites you might find easy to convert and, reputedly, the climate is not bad; one sees the sun many (summer) days of the year.

we were fed bogus nonsense about how tight the polls were

Nonsense yes, but not bogus in the sense of a deliberate intent to deceive, I'd say. From everything I read the 'tried & true' political polling techniques of yesteryear just don't work well anymore and the pollsters have not figured out how to fix a broken methodology.

My apologies if I misunderstood your use of "bogus".

your man Trump is a fascist

You are too kind Simon.

Trump is a narcissistic idiot. Fascisism implies a coherent political philosophy (or at least some kind of coherent world view) that is well beyond his capacities.

Trump not my man, just the devil I dont know

THE TRUMPING OF GOD’S COUNTRY:
A Modest Proposal by Aeon 999
http://musemash.tumblr.com/post/152260319810/the-trumping-of-gods-country-a-modest-proposal

This essay is widely held to be one of the greatest examples of sustained irony in the history of the English language. Much of its shock value derives from the fact that the first portion of the essay describes the plight of starving beggars in Ireland, so that the reader is unprepared for the surprise of Swift's solution when he states, "A young healthy child well nursed, is, at a year old, a most delicious nourishing and wholesome food, whether stewed, roasted, baked, or boiled; and I make no doubt that it will equally serve in a fricassee, or a ragout."[1]

A Modest Proposal
For Preventing The Children of Poor People in Ireland, From Being Aburden to Their Parents or Country, and For Making Them Beneficial to The Public
By Jonathan Swift (1729)
http://art-bin.com/art/omodest.html

Let's talk with our panel about this. Let's begin with CNN legal analyst Paul Callan.