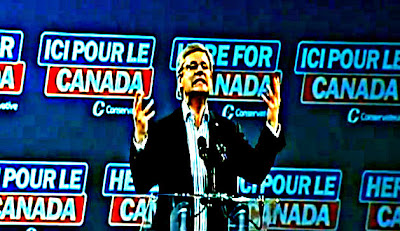 Well now we know how Stephen Harper was feeling only a few hours before he won his precious majority.

How he turned a mike check into a cabaret act, when he thought the cameras weren't rolling.

Because now somebody called Steve Harper has uploaded a video of that performance to YouTube.

Not just because it's an absurd PMO Production obviously designed to try to humanize Great Ugly Leader's battered image.

The anonymous video release was greeted with laughter and some cynicism in Canadian political circles on Wednesday, with many of Harper’s critics suspecting a PMO-orchestrated effort to lighten an image that’s taken a battering over the past few months of scandal.

Reaction to the video was varied across social media in the wake of its release late on Tuesday. Some pundits and journalists wondered why it was so easy to get a copy of this video out before the public, and not a copy of the $90,000 cheque that Harper’s former chief of staff wrote to senator Mike Duffy earlier this year.

On a day when he announced he doesn't want to answer any more questions about that sordid Senate scandal.

Prime Minister Stephen Harper was in no mood Wednesday to respond to questions about the Senate spending scandal that forced his chief of staff to resign.

What's even scarier is that in the video uploaded by the mysterious Steve Harper, the real Steve is so damn COCKY.

So absolutely sure he is going to win that majority, he can hardly restrain himself... 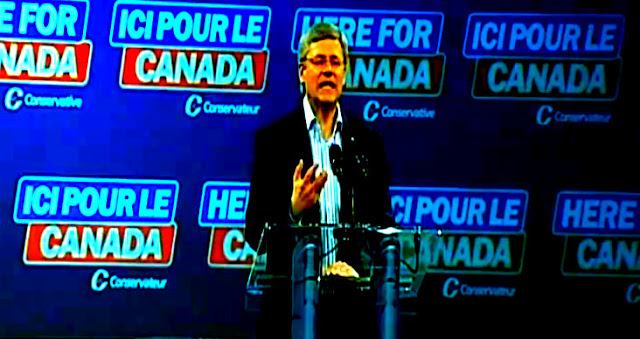 Forget what he's saying just look at his body language.

He's giddy with excitement, his hands have become claws. And by the way he bares his teeth, and the crazed look in his eyes, you know he's already tasting that juicy majority. It's dribbling down his chin.

Even though in most of Canada at that time, many people were still VOTING.

And I can't forget that while he was yukking it up, another Con comedian, Pierre Poutine, was sending out his filthy robot calls... 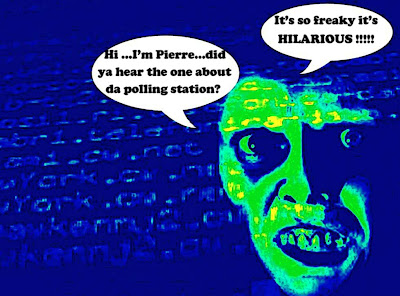 And making a joke out of an election.

Which makes me wonder, were Harper's exit polls THAT conclusive? Or did The Great Impersonator know something we didn't?

Oh well. Only Elections Canada, or the police, can answer that one eh?

Because let's face it, a guy who lies all the time, bullies and muzzles people, and can impersonate others like a fraud artist ,or a Con man, deserves to be closely watched. With one hand clutching your wallet, and the other your civil liberties.

And at least one thing is clear: The sinister operatives in the PMO are clearly DESPERATE.

For only those depraved fanatics would think they could humanize Great Ugly Leader, by making him look like a comedian. Or Mr Not So Weird Guy. After the brutish way he has behaved, after what he has done to Canada.

When the damage has been so great, and he IS so weird... 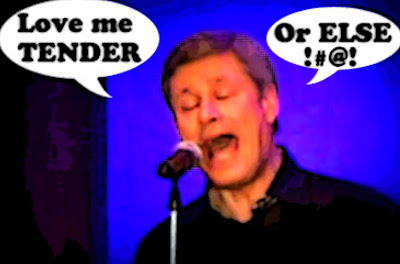 I mean haven't we seen this phony third-rate cabaret act before?

And when can we give it the HOOK?

Nine months ago, not one in a 100 observers of national politics would have predicted Harper’s continuing leadership could be in serious question heading into the fall of 2013. But in the past six months, Harper and his party have been broadsided by one catastrophe after another – all self-inflicted, with Duffy the culmination.

Harper personally is no longer broadly trusted, let alone liked, by a majority of Canadians. He may not yet be in Mulroney territory, circa 1992 – but we can see that crater from here.

He's slowly cracking up. His corrupt regime is crumbling.

The Con Cabaret is going NOWHERE... 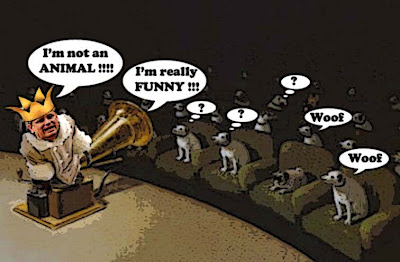 The Great Impersonator has been revealed or EXPOSED.

The hook, or the net, is waiting in the wings.

And the end of this freakish horror show.

Is sure to be funnier than the beginning...

There was once a puppet - Pinocchio. He would desperately seek safe shelter if he were to encounter our HARPENOCCHIO!!!

Your keen observations, and accurate recordings of your heartfelt opinions of the SCUMBAG, aka Harper, are truly appreciated, Keep
them rolling, and God bless.

OREL, in the 'Peg (out West) who is one among many who are NOT at all proud of this psuedo self-styled "Westerner" snake oil salesman!

I'm sure Brian Mulroney and Joe Clark enjoy being mocked in public by an imbecile. Steve will not have many friends left when he finally gets tossed overboard.

Actually the video was a smart move by some one in the P.R. dept. it shows harper as a "regular" guy. There he is getting ready for a speach, with his wife and son helping. its a family scene. Then Dad starts to "ham" it up and son tries to get Dad to pay attention to the task at hand. Actually the immitations of previous leaders is kind of funny. It shows Harper relaxed and with his family. Many who watch that video may even think he isnt' all that bad. Yes, that little video was a very good idea.

With summer approaching and the House closing, if the Cons, all stay off the radar, by the fall much will have been forgotten by the voters.

All party leaders go through the up and down mode while in office. I don't see Harper gone yet. The Cons don't have any one to replace him, who could even fake looking like a P.M.

Harper's term doesn't expire for some time. He,in his mind has work to do. Mulroney started the give away of Canada, Harper is going to finish it. Finish it he will. The voters of Canada gave him a majority and that isn't going to change until an election.

People will forget about the Duffy/Wallin thing and unless the other political parties make it part of their caimpaign nothing is going to happen. Most of the news regarding these situations will be on the back page. The MSM, which led with it to begin with, will not want to see the slimers go. They did their work so they could say they were real media and now they can go back to sleep.

We have only to look at B.C. and how the B.C. lieberals were re elected. Look at how long it took Quebec to have an enquiry into corruption. Unless it is in the voters face 24/7 or it impacts on them, not much will happen.

It is up to the opposition parties to hit the circuit this summer to discuss the problems of having stevie slime and the slimers running this country but I don't expect to see much of that happening either. That would require more work than they are willing to put out there.

Hi Orel...Harpernocchio? I like that and now that you mention it I believe his nose is growing.;) But yeah I do wear my heart on my sleeve and I sure hate our ghastly puppet.

P.S. No Westerners should have to apologize for Harper. He's Toronto's shame...

hi anonymous...I'm glad you mentioned that, because even Brian Mulroney was a must better Prime Minister than Harper. And Joe Clark for all his failings is a much better Canadian and a far more decent man than Harper could ever hope to be...

hi e.a.f....try to forget that BC election or you'll have a rain cloud following you around. ;)
Remember the current of history is running against Harper, these scandals are destroying the core of his brand, and as for the video, only 30-thousand people have viewed it so far, so it's hardly going viral. I'm not saying that we still won't have to get our act together, or fight a brutal election campaign. But for the first time I feel that the odds are swinging over to our side, and defeating the Cons is now a real possibility...