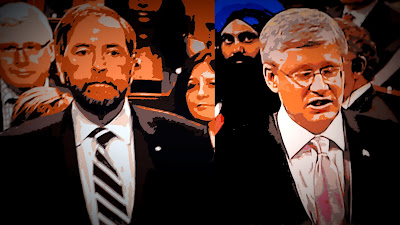 On one side there was Tom Mulcair, controlled, dignified, asking short direct questions about the sordid senate scandal.

On the other there was Stephen Harper, squirming like an eel, dodging most questions, and lashing out like a political thug.

Thomas Mulcair began with a discrepancy. “Mr. Speaker, the Prime Minister has said that he did not find out about the payment from Nigel Wright to Mike Duffy until May 15. However, yesterday his cabinet colleague, Marjory LeBreton said: ‘On the 14th of May, the Prime Minister dealt with it.’ Who is telling the truth?”

Mr. Harper moved first here to reassure the leader of the opposition. “Mr. Speaker, I have been very clear. I learned of this matter on May 15, and of course immediately made this information public.” So Ms. LeBreton was apparently mistaken.

But this was not the “real” issue at hand, at least so far as Mr. Harper was concerned. “The real question is why the leader of the opposition, on November 16, 2010, said that he knew nothing about the activities of the mayor of Laval which are now before the Charbonneau Commission, when in fact he had known for 14 years.”

Ending every answer the same way, as if he could smear Mulcair into silence. As if he could intimidate him, or muzzle him, like he has done to so many others in the horror of his Harperland.

Only to end up exposing his inner beast, and looking like this... 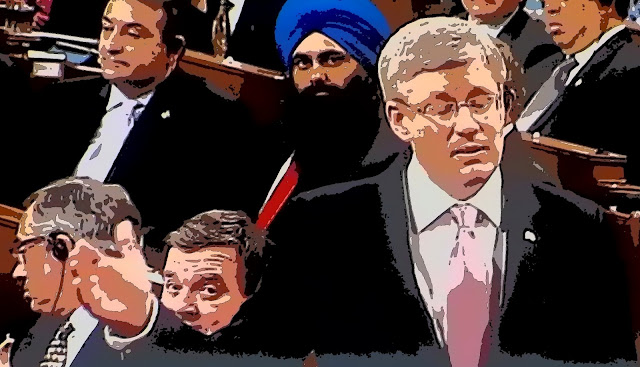 Defeated, half crazed, totally PATHETIC. Either a man who believes his own lies, or one covering-up a crime. And is in either case, unfit to remain in office.

A grubby political pornographer who has dragged our democracy into the gutter. A weird totalitarian who seems to believe that if he repeats anything enough times people will believe him.

A man who would make Nigel Wright sound like a saint, who helped the fallen Mike Duffy out of the goodness of his heart. Instead of a big Con bagman.

Wright’s role as one of the party’s key money men bears scrutiny, since the notion that he acted on his own — paying off Duffy with his own money without telling the prime minister — is central to Harper’s insistence that he knew nothing about the possibly illegal payment to Duffy.

Or a right-wing zealot desperate to protect his boss from further embarrassment.

And then there was the other question Harper absolutely refused to answer today: Did his new Chief of Staff Ray Novak, who was then Harper's personal secretary, know about the Duffy deal?

Because if Novak did know, and considering that him and Harper have been together FOREVER. And are so close Ray once used to live in Steve's garage at Stornoway.

And some call him Harper's Robin... 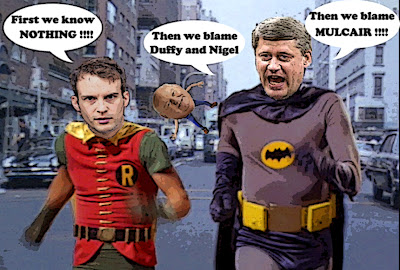 It would be REALLY hard to believe that Great Batty Leader didn't know as well eh?

Oh boy what a mess.Trying to keep up with the Con mob is like watching a crime show that never ends. A horrible grunting mix of the Sopranos, the Benny Hinn show, and American Hoggers.

Forget the fake Batman. Where are the police when we need them?

On Monday the RCMP issued a statement saying it was still "considering" opening an investigation file into the Senate expenses scandal of Mike Duffy. What's to consider?

It is not up to the RCMP to decide whether a prosecution would be successful. It is their job to put together the evidence and package. It is Crown prosecutors that would make the ultimate determination. At the least, it would seem there exists a prima facie case on the facts as known. Time to start investigating and stop dithering.

You know for a moment today, when I saw Stephen Harper squirming like an eel, sighing loudly, occasionally slurring his words, and looking totally beaten, I actually wondered whether he might resign before the next election. As some people are starting to say he will.

But then I saw him sit down after smearing Mulcair, as he did Justin Trudeau, for about the tenth time in two minutes.

And when I saw the look on his face... 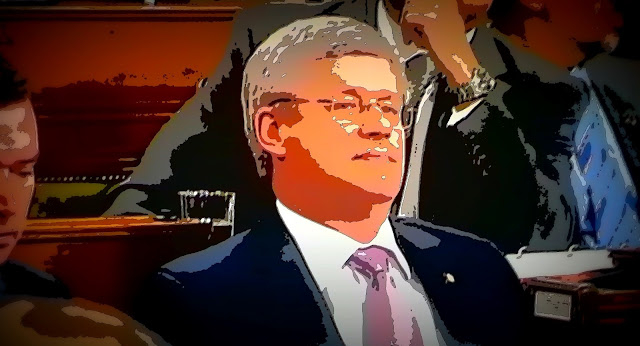 I realized that the beast in him still lives. The brutish bully will not go easily. He will cling to power even if it means bringing the roof down on his party and himself. Even if it means destroying the country he hates so much.

And we will have to defeat him in the next election. If the police don't arrest him first.

But the good news is, it's going to be easier than most of us once imagined. Or once dared hope.

I realize that a lot of progressives are deeply depressed about the state of this country, and the actions of the foul Harper regime. And who can blame them? For no decent people should consent to be ruled by such a morally corrupt government.

But they should cheer up eh?

Because the Cons really are rotting, like a fish, from the head down.

Stephen Harper really is unravelling. And exposing his inner beast.

The cool fresh wind of The Great White North is in OUR sails.

And a brighter future lies ahead... 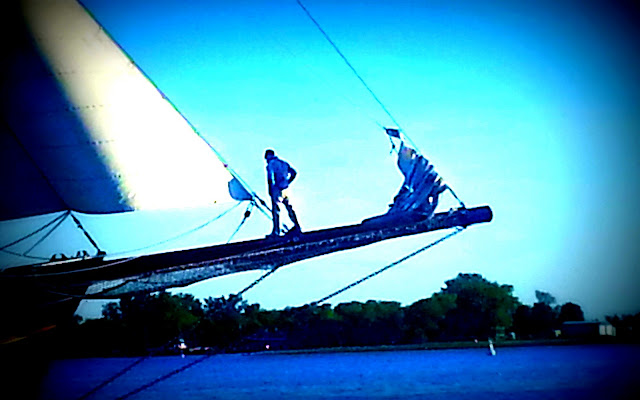 harper sees himself, novak and a host of others being installed as leaders in the new Ministry of Peace; the Ministry of Plenty; the Ministry of Truth or perhaps even the Ministry of Love coming soon to a neighborhood near you brought to you by the nice folks who are now forming the NWO as we speak. All you have to do is check the membership of the Bilderburg cabal, Skull and Bones and a few other well known "boys clubs" to see who the players are. harper will hang on until way past the bitter end. he will take Canada into a place very few of us (even his loyal minions) have dared to even imagine.
God help us!

Anybody notice that the bigger scandal: widespread election fraud, has just about disappeared from view?

Nice post Simon, although I did note a small spelling mistake. You called Stephen the Great Batty Leader. Given his "intimate" relationship with Ray Novak, shouldn't that have been the Great Bati Leader?

hi anonymous...yes it will be interesting to see how Harper tries to remake his shattered image, and shake up his cabinet to make it look like it's a whole new/nouveau government. Good luck. However, while I do think that he will hang in to the bitter end, he does have a history of quitting suddenly. Like he did when he quit his job as Preston Manning's policy director in a huff, returned to Calgary, in what only be described as a fragile mental state, and joined the tub thumping missionary church which would shape so much of his thinking. So I'm hoping for a miracle... ;)

hi Ray...I wrote about that the other night. It's unfortunate that the robocall verdict has been buried by the senate scandal. But it hasn't gone away, there may still be some startling developments, and the opposition would be smart to remind Canadians about it as much as they can. As I said the other night, both scandals can complement each other since they both have a central theme: Who can trust Stephen Harper?

hi anonymous...well I'm not suggesting their relationship is THAT intimate. I'm sure they spend their evenings talking about such fascinating things as how to kill the E.I. program, the enduring appeal of Ayn Rand, and of course how to screw the Liberals... ;)

Who is this PM anyway? His arrogance in all matters and handling of people and projects that are being paid for by taxpayers for whom he seems to have disdain, even moreso when they are from Quebec or the East Coast. What we need to bring down this PM with his 'L'État, c'est Moi' (I am the State) attitude is a commission like the Charbonneau commission into the oil deals going on especially in Alberta. His blatant arrogance goes as far to use National Media (CBC and Radio-Canada) to promote the safety, cleanliness and prosperity of exploiting oil sands. (Why do you think that he has museled scientists in the Federal Public Service??) Who are these oil barons upholding this man in office? Who is trully benefiting for this push for oil sands and the proposed pipelines to the US and the the West Coast? The PM's friends, of course and ultimately, the PM and PCC party. A commission would surely reveal interesting finds. The PM slush fund in Ottawa is just the tip of the iceberg...