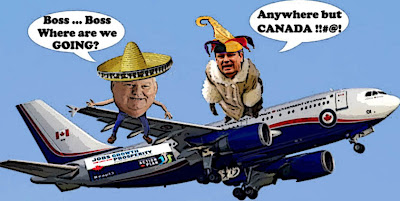 Well I see Stephen Harper is getting ready to jump into his shiny new Con getaway plane, and escape to Europe.

No doubt hoping that he can leave Mike Duffy and the sordid Senate scandal behind him eh?

But sadly for great cut and run leader there isn't much business in this so-called business trip.

Prime Minister Stephen Harper will meet next week with Queen Elizabeth II and the leaders of Britain, France and Ireland but probably won’t be able to use his trip to Europe to ink Canada’s long-sought trade deal with the European Union.

So bored reporters are bound to bring up the Senate scandal again and again. And he might as well take Old Duff with him to give him some tips on how to look busy.

When you're on vacation. 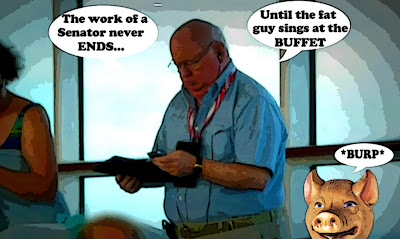 You know...how to work the buffet table. And stick taxpayers with the BILL.

Because I don't know how much this 8-day Con Clown Tour of Europe photo-op is costing us eh? But it's threatening to rack up almost as many air miles as Pamela Wallin. So you KNOW it's going to be EXPENSIVE.

Conservative Sen. Pamela Wallin is expected to be the next player in the Senate-expenses spotlight, as auditors continue to examine her travel bill of more than $300,000 over the past three years.

And even Harper's prize photo-op with the Queen is bound to be a disaster eh? After Harper is forced to answer questions about this other Con Senator.

Beleaguered Sen. Patrick Brazeau is expected to appear in a Gatineau, Que., court again Monday to fight allegations of assault and sexual assault.

An outside audit, which probed Brazeau's filings, indicated he needed to repay $48,000 in housing allowances. Brazeau maintains he didn't break the rules and he refuses to repay.

Leaving the horrified Queen to fend off Harper's unwelcome advances... 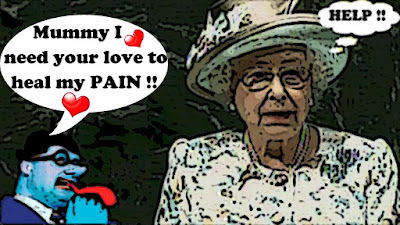 And no doubt wonder what kind of mob is running Canada eh?

And the best part is that the PMO operatives were hoping to use the trip to boost Harper's image, and kickoff the next election campaign. But now the the sight of Great Ugly Leader squirming like an eel in the presence of foreign leaders is bound to have exactly the opposite effect.

Make him look like a mobster on the lam, bent over a buffet table like his pal Mikey. Dodging the truth, and shaming us in the eyes of the world.

Which will make any hope of putting a new face on his rotting government this fall almost impossible, and that along with the revolt in the Con ranks, could eventually lead to Stephen Harper's early departure.

Given the stakes, and the natural uncertainty about whether Harper even intended to run again, before the Duffy affair, the weeks of bungling, deflection and obfuscation are strange and inexplicable. They begin to make sense, perhaps, if there are more and worse revelations still to emerge, which the PMO has been frantically trying to tamp down, till the summer break.

Either way, Harper’s personal credibility has taken a massive broadside — and one that shows few signs of being temporary. This all may be more than tweaking, reshaping or rebooting can address, in other words. It may require something more fundamental, such as change at the top.

It's like a buffet that keeps on giving eh?

I just can't get ENOUGH. 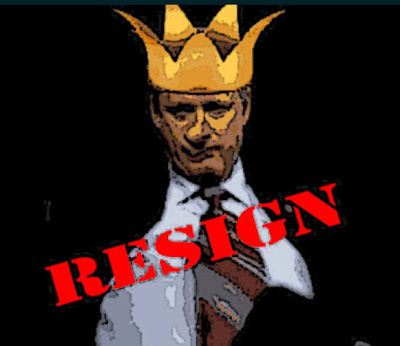 Enemies of the State, relax unless you have done something wrong, they will never use the data they collect on every Canadian.
http://www.theglobeandmail.com/news/politics/ottawas-new-anti-terrorism-strategy-lists-eco-extremists-as-threats/article533522/

There are some country's in the EU zone, not exactly impressed with Harper. Seems Harper gave false statements regarding, the toxicity of the dirty tar sands oil. At a meeting of Nations, Harper was told where to go and, the shortest route to get there. Other country's detest Harper's bullying and his hissy fits, when he doesn't get his own way. Harper always manages to anger and insult, every country attending those meetings. Harper is running out of, country's to trade with.