The Con Circus and the Real Scandal 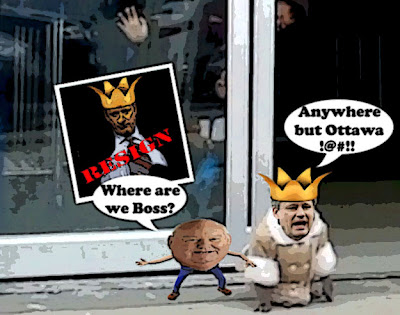 I'm sure he knows that if Tom Mulcair gets to grill him about the Duffy Affair again, like he did last week, they'll have to wheel Great Shattered Leader out of the Commons between two large pieces of toast.

No doubt screaming: "Will somebody please get this monkey off my back......or this EGG off my face !!@#!!

If the police don't grill him first.

A senior Conservative wants to call in a federal watchdog to perform a top-to-bottom review of Senate expenses as the Mounties confirmed Monday their own review of the spending scandal now extends into the prime minister’s office.

But as it turned out nobody really noticed Harper's absence, because his faithful stooge John Baird filled in for him at the Con Circus formerly known as Question Period.

And he did a stunning impersonation of his beloved leader. Or drag show as we call it in gay eh? 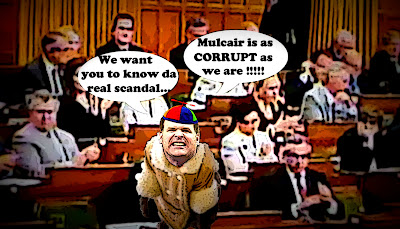 Mimicking Harper perfectly. Repeating his lines verbatim. Refusing to answer any questions. While claiming that the real scandal, the source of ALL corruption, is TOM MULCAIR !!!!

And needless to say it was a sickening spectacle. As sordid as its subject. But it did remind me that only people who make a mockery out of our democracy, like the Harper Cons do all the time, would think that they could get away with trying to steal an election.

And that if there is a REAL scandal it's this one. 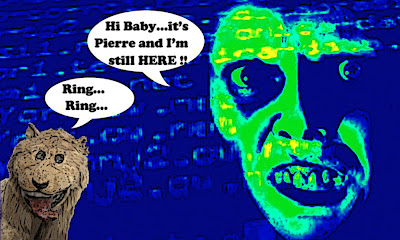 Where was the outrage over their database being hijacked? Where were the reassuring words to supporters, or the thousands of other people whose names are in that database, that the party was doing everything it could to make sure the system couldn’t be hacked?

Moreover, we learned this week, thanks to confirmations by chief electoral officer Marc Mayrand , that Conservatives have been slowing down the criminal probe into robocalls — keeping investigators cooling their heels for months, scheduling interview appointments that get cancelled and making key people unavailable for questioning.

You don’t need a degree in psychology to ask: Is this how people act when they’ve got nothing to hide?

The scandal that hangs like a shadow over our democracy. The one that threatens our future. But is being buried by the Senate Scandal. Because it's easier for dumb Canadians to understand eh?

And it has larger than life stars like Mike Duffy and Pamela Wallin.

And hopefully soon THE BRAZMAN !!!! 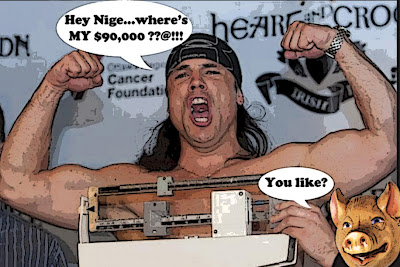 I mean how can democracy compete with THAT?

But here's the good news: All the scandals are coming together, like little twisters join forces to form a giant tornado.

Because they all have the same theme.

Or the same punchline... 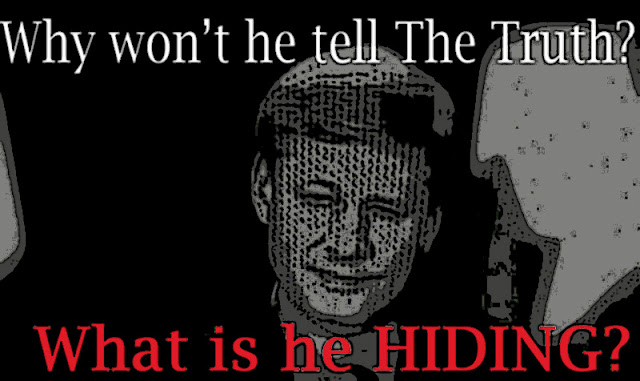 And when that happens the attack ads make themselves, and they can be DEVASTATING.

Yup. Even as it hammers the Cons on the Senate scandal the opposition should also keep reminding Canadians of the robocall scandal.

Because one scandal might hurt the Cons more than the other.

But together they could DESTROY them...

Baird looked like a desperate fool in QP yesterday. Evading questions and repeatedly pointing out that Mulcair is an honest man who witnessed what could have been criminal activity 20 odd years ago is truly absurd behavior on Baird's part. More signs of the cons decay.

Regarding the robocall scandal, Evan Soloman on P&P addressed the complaints about the lack of coverage by saying there is much to come on CBC about this important issue. We will have to see what will be left of the CBC's editorial freedom after the passage of Bill C60. Other journalists have to step up and do their jobs as well, IMHO. More and more, this is the case.

Thank you, Simon, for another spot on blog. I always look forward to reading your work.

Yeah, right. The A.G. isn't one of the CONservatives paid lackeys? The rcmp doesn't follow the back-room-deals orders of their CON masters? Gimme a break! That audit and $2 will get me a cup of coffee at Timmy's for all that audit will be worth. "no evidence of wrongdoing, m'lord" is the way this whole thing is going to work out. Another kabuki waste of my tax dollars "hard at work"!

We need a lady in Red. Bridget Depage stand up.

hi Cathy... Thanks, I'm glad you like it. And you're right, the Cons disgraceful behavious is just another sign of decay. Sometimes I still can't believe what I'm seeing. The Harperites have turned our parliament into an Orwellian nightmare, mocking our traditions, and acting like animals. So the thought that they could get away with trying to steal an election really bothers me. However, I am hoping that something comes out of the investigation, and that the police finally get involved. All it would take is a small break and the whole house of cards could come tumbling down. By now it should be clear that they are capable of anything. Now all we have to do is catch them... :)

hi anonymous...I hope you're wrong, but I can't blame you for being sceptical. The Cons have corrupted so many institutions, one can't even trust the police. As for the audit, it's just a delaying tactic, in the hope they can find some Liberal senators who have been fiddling with their expenses, and spread the manure around. However, it seems to me that the police have a very good case, so while they may have to tread gently for obvious reasons, they will have to lay charges eventually, or see their own credibility also go down the drain...

hi Steve...yes indeed, what an amazing story, and needless to say the demonstrators have my total support. To let a country with a secular tradition like Turkey fall into the hands of religious fanatics would be a horrible blow not only for the whole region, but dare I say the whole world. Why Canadians can't take to the streets to express their disgust is something that bothers me greatly. I'm starting to accept that it is who we are, but I'm proud that I have worn out at least two pairs of sneakers marching to suport one progressive cause or the other. I'm just hoping I won't have to wear out another pair, before we can give the Cons the boot... ;)