Stephen Harper and the Revolt of the Con Sheep 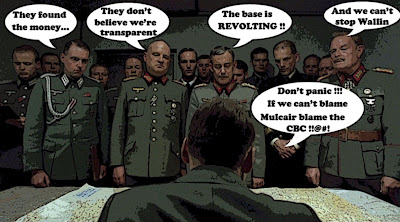 Oh.My.Gotterdammerung. I can only imagine the grim scene inside the Harper bunker tonight.

And Great Ugly Leader in a lather screaming "Attack the CBC !!!!"

The federal Conservative Party is denying the existence of a secret fund in the Prime Minister’s Office controlled exclusively by Stephen Harper’s chief of staff.

"The CBC, Peter Mansbridge and Greg Weston misled Canadians. They should retract this piece of shoddy journalism."

Desperately trying to cover-up something that looks, walks, and quacks like a slush fund.

Throughout this sad business, money is the common link. Harper appointed Duffy to the Senate not because the former television journalist has an abiding passion for public policy but because, as a media celebrity, he promised to be an ace fundraiser.

In such circumstances, it is easy to understand how someone might think it fair to use party funds raised in part by Duffy to help extricate him from a situation that was already embarrassing the government.

Desperately trying to distract his rabid base from the sordid Senate scandal, by throwing them an old bone to chew on.

But it's just not working. Most Canadians don't believe ANYTHING Stephen Harper tells them. Even some in the Con caucus are revolting.

Rathgeber's caucus resignation might be a solo act of desperation, but he's got a silent scream of support in the backbench. Privately, MPs echo his concerns about a prime minister they half-jokingly call the Dark Lord and his whip-cracking staff of baby-faced stormtroopers. 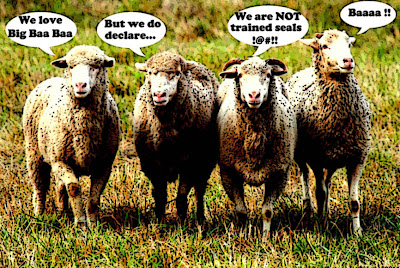 And although it looks like a Tijuana animal act, all of this could prove fatal for Great Ugly Leader.

Of such moments, revolutions are made. Edmonton MP Brent Rathgeber’s resignation from the Conservative caucus, which dropped inside the Ottawa bubble like a little concussion grenade late Wednesday, represents more than the loss of a single MP among the 164 Tories in the Commons. It is a dagger straight to the heart of Prime Minister Stephen Harper.

Unless he responds dramatically, effectively and soon, the betting on his stepping aside before the 2015 election goes from even to odds-on. It also becomes not only possible, but likely, that the caucus will suffer further defections.

For if the revolt grows, so will the chances that Stephen Harper will RESIGN.

With every passing day, the notion that Stephen Harper could pack it in before the next election and let someone else try to keep his fractious party whole enough to hang onto power in two years sound less and less far-fetched.

Harper may still be in full control of his PMO but it on the other hand is less and less in control of the government and the political agenda. Unless that changes quickly, the prime minister will not remain the sole master of his political destiny for much longer.

Yup. He may have a shiny new Con Plane.

But the wings are falling off the Con regime.

And our nightmare journey could be over even sooner than we had hoped ... 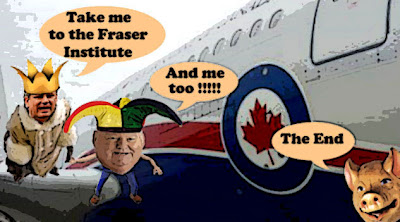 And of course, just thinking about that makes me feel like I can fly eh?

So I'm winging off for the weekend. On my bike.

NEWS FLASH!!!
steven harper prorogues Parliament indefinitely!!!
Declares himself new emperor of Canada!!!
CAF and RCMP to be used as shock troops and secret polizei to make sure Canadians stay loyal to the vaterland!
Film at 11 p.m.!!!

The only people who benifit from Harper resigning are the Tories because he takes his baggage with him. Just ask Wynn and Dalton how that works or the Alberta PCs.

No I want him to stay, to taste bitter defeat and most of all to take his bloody Tories with him into the wilderness. No clean slate for the Tories, he can stay and be the lead weight that drowns the Tories.

And if your hoping Kenny becomes the new leader it won't happened, it might if it was one vote is one but its not its weighed by ridings, which means a comprise candiate like Rempel who is one of the more talented PCs, from the West, but isn't a knuckledragger like Kenny will win.

Prentice will come in and steal the leadership and the Tories will change the channel. (he has nice hair too)
The Libs and the NDP will split the vote in the next election because Mulcair won't be good enough and Trudeau won't be bad enough. This will go on for several years until our country is an environmental wasteland.
And then....the Greens and the Libs will finally get their act together just like May, Cullen and Murray said and we will bring in rep by pop. I only hope we don't figure it out too late.

The conservatives need to get on board with the CBC and realize its not just criticism and humor about them but about us. The CBC should concentrate on informing us about our community and connecting us to others across Canada then the world and then the US

.. its not that complicated .. Identify every single unelected PMO employee or volunteer. That means every single person .. operative, flunkie, media minder, policy advisor, spokesperson, database entry clerk, speechwriter, hairdresser, gofer .. no stone unturned.. see what crawls out .. it will take some effort.. I believe they outnumber the weakling members of Parliament.. though they may be less than 500 .. inc The 'Conservative Party' upper crustaceans & bedbugs

Along with their names, we need to connect their specified task or job description and what they are paid (approx), and what they have accomplished since being hired.. and who they work for or under.

There is no need to get bogged down or split hairs re who is PMO and who is Conservative Party ..
its all the same dim as a bag of hammers cadre, that smell like the shite they are

If its not clear who runs this country along with Stevie/Ray Harper/Novak .. it should be..
its an un-named group of PMO bureaucrats, cronies, dwarts, thugs and cronies.. and ''senior advisors'
plus Baird, Kenney, Flaherty, Clement, & Oliver .. the rest are deadweight & disposable

Its certainly not the elected MP's who seem unable to recall who elected them within their constituency.. or why
Its certainly not the rest of the deadfish Ministers.. Defense, Environment, Fisheries and Oceans, Procurement, Indian Affairs
Not the Senate.. uncertain where they live ..

Harper is no Conservative, he doesn't govern he dictates. Harper's own Caucus named him a control freak. Harper was Policy Chief for his, Northern Foundation Party of 1989. Harper had hired Wolfgang Droege and his Heritage Front as, security for Preston Manning. I have never believed nor trusted Harper since. Harper's word means absolutely nothing.

Harper's Omni-Bull-S-Bill that permits Communist China to sue Canada, if anyone blocks China's huge inroads into Canada. China sued in BC, to take the 200 BC mining jobs. Harper's FIPA deal with China means, China will take Canada over for, a minimum of 31 years.

This is the country, Harper has invited into Canada.