Will Stephen Harper Resign Before 2015? 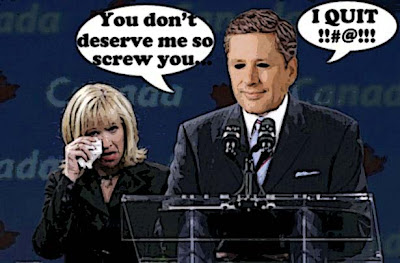 Well last night I shared one of my favourite dreams with you eh?

The one where the crazed alien Stephen Harper, battered beyond recognition by scandal, suddenly decides to quit.

And I said how encouraged I was to see some big shots in the MSM also musing about whether he might resign before the next election.

Only to have Paul Wells, the faithful keeper of the Harper flame, come along today and pour water over his colleagues, and the whole idea.

For these reasons and others, I suspect we’ll have Stephen Harper around for a while yet. Whatever trouble the Conservative Party is in, it will be in worse trouble if he quits. And to a greater extent than most leaders, Harper’s pride is bound up with the long-term success of his party: if he left the leadership and the Conservatives were routed, he would take this, not as proof of his irreplaceable greatness, but as evidence that he’d failed to construct a durable conservative political movement. So I won’t be writing my Farewell-Harper(?) column anytime soon.

And who knows, Wells might be right. Harper will try to cling to power like a flea clings to a dog. His party would be hurt by his sudden departure. Great Ugly Leader's delusions of grandeur are as large as he is small.

And of course a lot depends on the performance of the opposition, the state of the economy, and the voices in Harper's head.

But I also think Wells underestimates the damage all those scandals are doing to Great Ugly Leader's already tarnished image. How they are reinforcing a common narrative: Harper is secretive, he lies a lot, and he cannot be trusted. Or how much those scandals are hitting home.

For a Conservative it was not a pretty sight. People were visibly annoyed and followed every exchange. Heads were shaking as the Prime Minister answered Mulcair. Clearly people didn’t believe his answers and they didn’t like what they were hearing. His pushbacks on what Mulcair might have known years ago didn’t go over well at all, even invoking some muttering from a few in the type of language that can’t be printed here.

I don't think Wells understands just how tired and fed up so many Canadians are of this hypocritical burned out Con regime that would pose as crimebusters, while sheltering wealthy tax dodgers.

Tax watchdog groups say Canada is resisting efforts by Cameron and G8 countries on a couple of measures that would further combat tax evasion, including identifying the true owners of offshore accounts and shell companies by disclosing what’s called beneficial ownership information.

Or impose austerity on others, while living it up like hogs, or charging us for stuff to make them look pretty.

A Conservative MP claimed election expenses that included hundreds of dollars for repeat visits to a hair and nail salons, skin care and grooming products, and even whitening toothpaste.

I don't think Wells understands how many Canadians are sick to death of the very sight of Stephen Harper and his grubby Con pals... 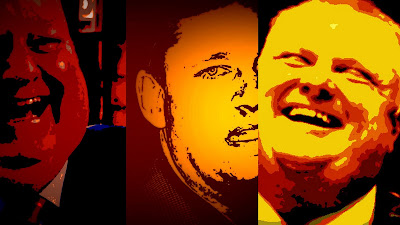 How disgusted they are by the kind of man he is and the company he keeps. How angry they are at all the terrible things he has done to this country and its democracy. How much they hate him with every bone in their bodies. And how determined they are to defeat him in the next election.

For no decent Canadian can ever accept to be governed by such a corrupt regime, or such a depraved leader. And not to demand better, would make us as bad as they are.

Paul Wells may not understand any of that. For him it may be just a cynical game, where moral outrage counts for nothing. Or maybe he really does see himself as the faithful keeper of Harper's flame. I don't know.

But what I do know is that flame is finally flickering.

Harper has never been so vulnerable.

The scandals have diminished him.

And one way or the other.

This shabby movie is almost over... 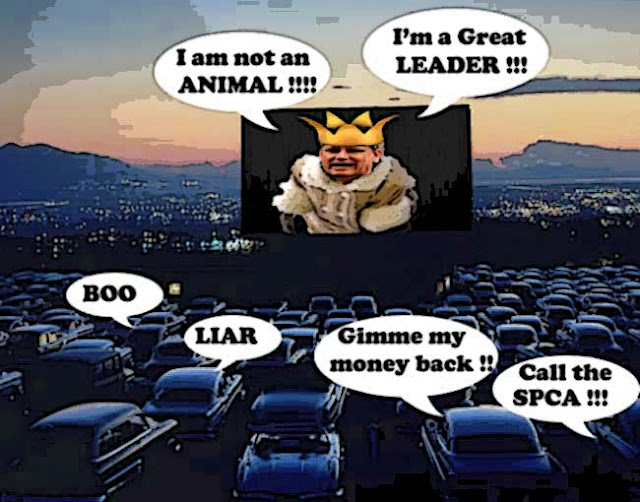 Prior to the scandals, it was my belief that he would retire before the next election -- with just enough time for an interim leader to ingratiate himself (face it, the Cons won't pick a female leader) with the Canadian public, but not enough time for the royal heir to completely f#$@ it up. There were already signs that King Harper was grooming someone, which wouldn't happen if he wasn't already planning his exit.

Since the scandals, I don't know. It will depend on two things, I think: whether he thinks he's needed to keep the Cons together, and whether the Cons become convinced that they need to dump him to maintain success. And the longer the scandals remain in the spotlight, the more likely the latter will happen.

If I have learned anything about politics it is that the fall of leaders is very hard to predict. It sometimes happens suddenly and without warning, as it did with Thatcher. More often it is a gradual corrosion of power within the party and and the decline of popularity with those vital swing voters. This happened with John Major in England (the guy who took over from Thatcher). Less than a year into his mandate Major was forced to take the Pound out of the Exchange Rate Mechanism and this lost him many of the traditional finance-types. From there it was a gradual decline into oblivion. I think Harper's decline the week that he announced the extension of the retirement age. You can see his polling decline slowly but steadily from that week. But I don't see a caucus revolt being the end of Harper. His caucus has been far too week and cowardly in the face of his autocracy for that. I think he will either go into the next election with all guns blazing or surprise us and suddenly bow out quietly.

He seems to have lost his mind, or he is going for a big fat severance. The Pickering Airport never made sense, its going to cost a fortune, but fortunes will also be made. Politically it will cost him at least two seats, maybe more. So cahing, they are building the dam airport.
http://thinkingaboot.blogspot.ca/2011/07/crazy-airport-scheming.html

it tough to run inside a closet.

Harper's own Caucus named him a control freak. Many of the so called Conservatives refused to send out, Harper's hate ads towards Trudeau. They also resent being, trained seals. Harper dictates what is said in Parliament. Harper also dictates outside of Parliament.

Scores of Canadians are furious with Harper for handing Canada, resources and resource jobs to China. They detest Harper's Omnibus Bill that permits China to sue Canada if, anyone tries to block China's huge intrusions into our country. Therefore, China sued to take the 200 mine jobs, away from BC miners.

Harper's absolutely horrible FIPA deal with China means? China will take Canada over for, a minimum of 31 years. China will also take, the timber and the mines on, Vancouver Island. Harper is bringing China, into the rich resources of the High Arctic.

This is the country Harper is handing Canada to. Read about, China's blood diamonds.

hi Mercedes...until recently I believed that Harper would try to win the next election and then hand over the party to his chosen sucessor. And I still think he will try to do that. But I have been surprised to see that Jason Kenney and others in the party are making their move already,so now I really wonder whether he can hang on. But I'm not at all afraid of Jason Kenney becoming Prime Minister BEFORE the next election. For he won't have time to do must damage before he leads the Cons to complete disaster. I know Kenney has delusions of grandeur but if he thinks he can win an election he must be out of his mind...

hi Kirby...yes I agree with you, it is hard to predict when a leader will fall. And even harder to predict what a man like Harper might do. He will pull out all the stops in the fall and see if he can boost his polls. But if it doesn't work, and the scandals keep coming, and the revolt in his caucus grows, he is the kind of person who could quit very suddenly. At any rate I'm feeling hopeful enough to go out on a limb and predict that he will quit in the spring of 2014... :)

hi webs...don't worry I haven't forgotten how he is selling us out to China and is planning to do the same with the Europeans and his much hoped for free trade sellout.
Right now the Senate scandal is battering his government, but when we combine all the horrible things he has done into a series of attack ads, their effect should be DRVASTATING...