The Senate Scandal and the Strange Silence of Jason Kenney 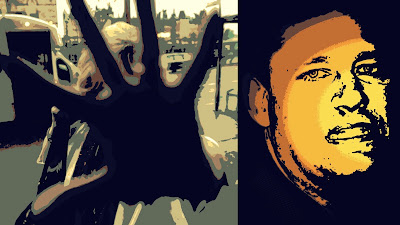 Oh no. Poor Stephen Harper. He just can't get a break from that horrible senate scandal.

As if having the hand of Pamela Wallin coming at him in his dreams, making it look like a sex scandal, wasn't bad enough eh?


Today he had to admit that when he personally examined Pammy's expenses and declared them "satisfactory."

There are “unresolved” issues regarding Sen. Pamela Wallin‘s travel expenses, the prime minister said Wednesday as his government moved to signal that it wants all parliamentarians to be more transparent about their spending.

And that when he praised Mike Duffy for showing "leadership" during the early days of  the senate scandal i.e. before they caught Nigel. He was really praising his OWN leadership:

In the House of Commons, Harper confirmed that he told Duffy to repay the money during a one-on-one talk after a mid-February caucus meeting where Duffy asked for “clarification” on a speech the prime minister had just given warning Conservative MPs and senators to repay inappropriate expenses.

But at least he wants Canadians to know that his right-hand man Nigel Wright didn't cut a cheque for Pammy like he did for Old Duff. And that he's all for TRANSPARENCY.

Only to have one of his own MPs resign from the Con caucus hours later, claiming the government isn't transparent enough !!!!

Alberta MP Brent Rathgeber abruptly quit the Conservative caucus late Wednesday, citing the government’s "lack of commitment to transparency" in the wake of a dramatic Tory rewrite of his bill to expose the salaries of federal civil servants.

Can you believe it eh? Even the sheep are revolting.

And if you thought that's an amazing phenomenom of nature. How about the case of the dog that isn't barking?

The strange sight of the unusually silent Jason Kenney... 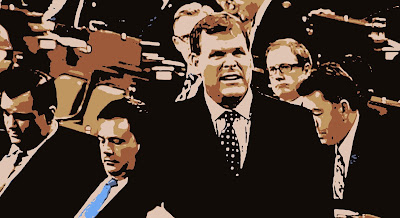 Because I noticed this a few days ago. That even as the opposition pounded the Cons on the Senate scandal, and John Baird, James Moore, and even Pierre Poilievre filled in for Harper, Kenney just sat there playing with his blackberry.

And today came this story.

When times get tough for Stephen Harper, he usually turns to his three loyal horsemen. But with the temperature turned up in Ottawa over the past two weeks, one of the horsemen has not saddled up.

Kenney, on the short list of anyone’s potential leadership aspirants, has so far escaped with none of the Duffy-Wright gum stuck to his shoe.

And what all of the above tells me is that the damage caused by this scandal is even more devastating than we can imagine. The Cons are clearly trying to protect Kenney in case Stephen Harper suddenly decides to resign. The old divisions are surfacing again.

The Reformers and theocons in the PMO  are making plans for Jason. 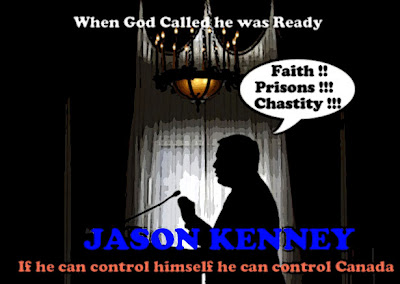 Because the day Kenney becomes leader of the Conservative Party will be the day it DIES.

Golly. It's a miracle eh?

We set out to defeat them. But in the end they might destroy themselves before the next election.

Let them blow the horn of Jericho Jason.

Let the walls of the Con regime come tumbling down. 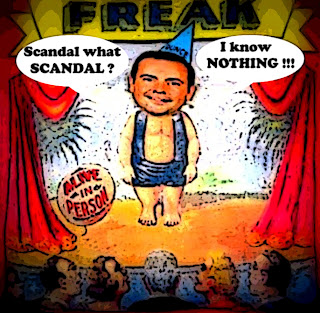 I made the following comment on BigCityLib's site, as his take on the conflict between Rathgeber and Harper's PMO is that he doesn't care who wins as long as somebody gets hurt.

You have Harper, his PMO, assorted minions including Dmitri Soudas on the one hand and a Conservative MP who represents his constituents' desire for open and honest government on the other, and you state you don't care who wins.

You don't have to agree with Rathgeber's policy proposals to respect his integrity, and I imagine if you were to compare Rathgeber's popularity and standing versus Harper's in many of these Alberta ridings, Rathgeber would come out on top.

Rathgeber's comments to the Globe after the parliamentary committee hearing where his proposed bill was gutted by Conservative committee members on the PMO's instructions are revealing:

“I’m obviously very, very disappointed both with the government position and certainly with the [committee’s Conservative] colleagues, many of whom philosophically support this legislation unequivocally, but seemed powerless to resist the instructions that were given to them by the PMO [Prime Minister’s Office], by the whip or wherever the final instructions came from."

"So, again, it’s complete disregard for the evidence and really, in many ways it makes a mockery of the whole committee process. If the decision has been made and the members have been instructed how to vote prior to the hearing of the evidence, it really begs a rhetorical question as why we bother dragging witnesses – some at great distances and great expense – to have them give expert testimony when the decision’s already been made up. I mean, that’s the way justice has been done in China, where the outcome of the trial is determined before the evidence is even presented."
...

And now Conservative hacks such as
Soudas are challenging Rathgeber to quit and run again in his riding as Independent, out of apparent concern for his electorate they scarcely demonstrated with respect to Emerson's electorate.

I did rather enjoy Rathgeber's comparison of Harper's PMO
to China's Politburo.

The Toronto Star article that you refer to with respect to Jason Kenney's silence notes:

"The immigration minister is a product of the old Reform base, is a former president of the Canadian Taxpayers Federation and the only one of the three to represent an Alberta riding, where Conservative MPs are getting an earful from supporters who expected more accountability and vigilance over their tax money."

It is likewise interesting to note that the Canadian Taxpayer's Federation was once Harper's home turf, that they were a major backer of Rathgeber's private member's bill, and that Kenney has not added his voice to the Conservative chorus denouncing Rathgeber's defection.

Actually, it could be possible that Mr. Kenney is just having a nap. Maybe he received QP napping lessons from Mr. Anders.

hi Rene...well my position would be similar to Big City Libs. I'm glad Rathgeber had the nerve to stand up to Harper's PMO, but since his bill was really aimed at the CBC, I'm clapping with one hand. I'm just glad to see the Cons fighting themselves since the Cons are far more fragile than most people think, and like their crazed leader, I too believe in divide and conquer... ;)

hi Rene...something really interesting is going on with Kenney. I have been watching those Con clowns closely for years, and I've never seen anything like it. He is definitely an unhappy camper and he is making no effort to hide that. It may be that the PMO is trying to keep his nose clean in case he has to replace Harper. But I suspect it's more serious than that, and has everything to do with his leadership ambitions. Stay tuned for further developments...

hi political junkie...Well I'm sure that Mr Kenney is sometimes pretty sleepy during Question Period. I read recently he usually goes to bed at the same time Nigel Wright gets up to jog through the deserted streets of Ottawa. But as I told Rene I think it's more than that. He just sits there, he doesn't even react to any of the Con speeches just keeps looking down and reading his blackberry. As his unofficial campaign manager in the Godless East, I am of course deeply concerned. For as I said in my post, I'm counting on the Virgin Jason to finish off the Cons... ;)