Commander Harper and the Guns of June 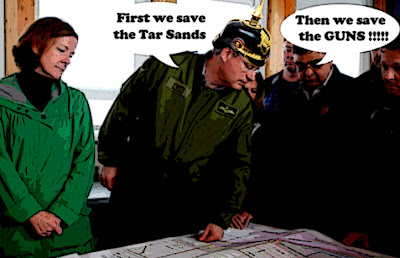 The stress of watching the flood waters AND the opposition advancing, has clearly driven him over the edge.

He's been dressing up in a military uniform and pretending to be Great Commander Leader.

But while his pathetic phony photo-ops are hilarious, this is the absolute limit.

Prime Minister Stephen Harper's office is urging the RCMP in High River, Alta., to focus on "more important" tasks and to return the guns officers took from homes while searching for victims in the evacuated flood zone.

"If any firearms were taken, we expect they will be returned to their owners as soon as possible," the statement said. "We believe the RCMP should focus on more important tasks such as protecting lives and private property."

Who does he think he is telling the RCMP how to do their job? How dare he suggest they aren't focused on protecting lives? When all kinds of officers have been risking their own lives, and working long hours to keep people safe.

Why is he blowing this incident out of proportion, pouring gasoline on the flames of paranoia, and undermining the recovery effort? Why is he playing politics with a disaster?

And of course the answer is because he's NOT a leader... 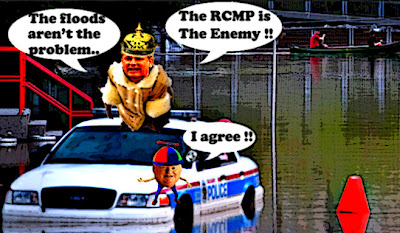 Just a depraved shrunken Con who would try to score cheap political points with his political base. At a time when some of them are deserting him.

“A significant portion of those new undecided are probably former Conservatives; people don’t usually switch from one political tribe to another overnight, they kind of move into the undecided category,” Nanos said.

“It’s important to re-convert those undecided voters, what I’ll call ‘grumpy former Conservatives,’ out of the undecided column back into the Conservative category.”

And if it stirs up the gun nuts, like the kooky freaks from the Canadian Shooting Sports Association.

"This act of aggression is further proof that the RCMP have a not-so-hidden agenda to take guns away from responsible gun owners," Tony Bernardo, head of the group, said in a release.

The Crown prosecutor is going after serious prison time in the Guelph, Ont., robocalls case, choosing to pursue Michael Sona for an indictable offence over misleading phone calls in the last federal election.

Sona, 24, is the only person charged so far in a broad investigation into complaints of misleading or harassing phone calls, allegedly intended to drive supporters of opposition parties away from the polls during the 2011 federal campaign.

Because he would turn the RCMP into his own Con police force, and he will do ANYTHING to try to cling to power.

And the good news? It won't work.

It will only make him look like a greasy gun nut, even more unstable, even more RIDICULOUS... 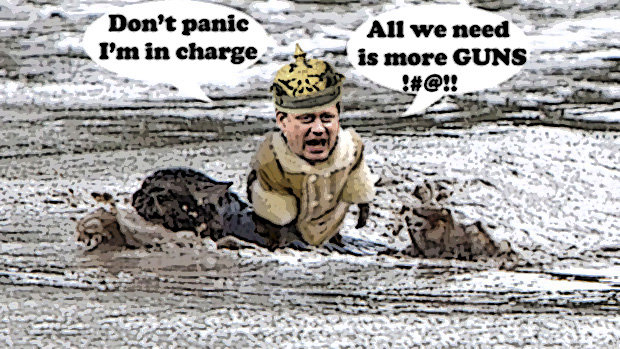 Not a Great Commander Leader. Not a Canadian Prime Minister. Just a small grubby Con being swept away by the forces of history. And growing more crazy desperate every day.

Golly. What good timing. Just before the Canada Day weekend.

So I can keep that thought in my mind, and party for THREE days !!!!!!

You know, Canada may not be perfect, but it's still a big, beautiful, young country, it deserves better, and we ARE going to save it.

So if Commander Harper wants a war he's going to get one...

OK. Who's buying the booze? I think I'm going to need a lot eh?

Why is he blowing this incident out of proportion, pouring gasoline on the flames of paranoia, and undermining the recovery effort? Why is he playing politics with a disaster?
-----

Simple, really. He wants to be a big frog in a little pond--Alberta, his home base. He working his butt off trying to deflect from all the other bad news coming out of the Conservative MPs and Senators and the polls.

But a PM instructing the RCMP what to do is beyond the limit of reason. Only an emperor or satrap would do that and Harper is getting to look more and more like Napoleon.

He wants to look *strong* on our national holiday.

The CBC news story you reference states the RCMP admitted several hundred firearms were seized while the RCMP was conducting a search of evacuated homes. Now I can believe a handful of people may have been careless and left guns lying about while they evacuated their homes under an evacuation order, but this suggests the RCMP did use the opportunity of the flood disaster to conduct a thorough search of homes, looking not so much for cantankerous survivalists refusing to obey the evacuation order, but rather for the booty they did seize.

Of course Harper is playing to his base, but this is all he has to offer them, to get them back their seized firearms. He can't give them back their properties restored. His Minister, Jason Kenney, is making polite requests to Canadian insurers to ignore the exclusions clauses they deliberately inserted into their homeowner policies and pay for flood damage, even though they have no legal obligation to do so. Now were they to do so, it would set a precedent and invalidate the flood exclusion clause they placed in their policies.

Homeowners were anxious to return to their homes, not out of concern for seized firearms, a minor loss and irritant, but in order to assess damage and mitigate losses. It would have been a different story if insurers had communicated to homeowners and advised them, don't worry, your losses are covered, we will send in restoration experts to clean up and decontaminate, we will send in contractors to rebuild according to code and in the meantime we will cover your living expenses. This is what would have been done if there were policy coverages for losses suffered.

And here is where government failed in its obligation, to ensure that mortgages were properly insured to cover homeowners in the event of catastrophic loss. It is not a problem for Harper and company who believe in a "laissez faire" economy, to leave consumers and the insurance industry to their own devices and to look the other way when there is blatant market failure on a massive scale. It does point to a problem with the NDP, that they are not aggressively pursuing the interests of the average homeowner. A disaster such as the Alberta flood does provide them with the perfect opportunity to point out the market failure of the Canadian insurance industry and argue the case for public insurance. If government is expected to step in and compensate policyholders for catastrophic losses which private insurers deliberately exclude, but are more and more frequent throughout the country, government may as well step in and issue the policies, collect the premiums, settle the losses and ensure repairs are properly done in accordance with building codes, if private insurers choose to opt out of such situations. Either force the private insurers to live up to their responsibilities or step aside and let government do they job they refuse to accept.

You can be sure if the NDP were campaigning for a government insurance plan to cover such catastrophic loss, the Canadian insurance industry would wake up pretty quick and remove the flood loss exclusion from their policies and homeowners would benefit from such coverage. It would certainly reduce tensions such as those witnesses between RCMP and angry homeowners in High River, anxious to return to their damaged properties and begin to mitigate their uninsured losses...

Yes, what's the big deal, eh? I am sure there would be no problem whatsoever were the police in Montreal to use a natural disaster as pretext to come into people's homes and seize their private property.
And it's a bit rich for you to accuse Harper (of whom I am no fan, btw) of "pouring gasoline on the flames of paranoia" before going on to characterise upset property owners as "the kooky freaks from the Canadian Shooting Sports Association". Just where do you think that "paranoia" comes from, anyway?

I grew up in a different age, Simon, during which the local school bullies, if they didn't end up in a biker gang, joined the local police force and continued their bullying behind a badge. You learned that while it may be pointless and stupid to taunt them in some dispute, and whereas you may be required to defer to their authority, you didn't trust them, or their motives. A little paranoia - as in a Stephen King horror novel distrust of authority - is sometimes warranted. And there is enough evidence out there including reports of harassment and brutality from female officers in the RCMP to suggest that many of them have not changed their ways and the general population should be wary in their dealings with police.

I do recall one humorous situation in the early 1970s wherein the entire Aylmer police force, before the town was renamed Gatineau, staffed by local former school bullies, was its own crime wave, breaking into people's homes while they were away on vacation and storing the loot in the basement of the police department while blaming the crime wave on enterprising local teenagers. They were eventually caught by the RCMP, the entire police force disbanded and charged with crimes against those they were sworn to protect. A bit of distrust is healthy.