As I paddle my way through life I'm sorry to say that so far I don't have much to brag about eh?

Whenever I toot my own horn there is always somebody there, like Seb or my Mum, to gently remind me I'm not perfect. !!@#!!!

But I'm proud to say that I don't have a bigoted bone in my body. I don't just tolerate diversity, I celebrate it. So you can imagine how happy I was to see this story.

The Quebec Soccer Federation (QSF) announced it has reversed its ban on players wearing turbans or related religious headwear on the pitch, saying it is pleased with the international soccer body's clarification on the issue, and it's "deeply sorry" if anyone was offended.

Because that ban never made sense. It was cruel to prevent Sikh kids from playing soccer. And if it wasn't downright racism, it was clearly the product of very narrow minds. Or very small ones. Too small for a country as big and as complicated as Canada.

Which is exactly how I feel about Rob Ford's decision to vote against funding the Pride Week Celebrations.

Not just because of the naked bigotry of the man. Or the way he refuses to march in the Pride Parade, like he marches in the Easter parade... 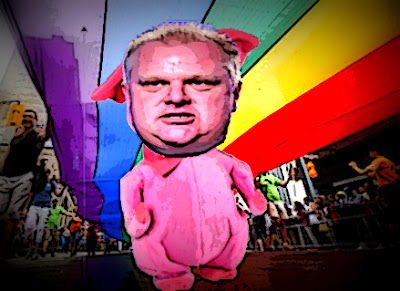 In fact I'm glad he doesn't attend. Because I'd hate to have to follow him the length of the parade route, with a supersoaker strapped to my back, and a bucket of water in each hand.

But what bothers me the most is the cheapness of it all. Trying to deny Pride $140,000 when the event pumps millions of dollars into the city's economy.

And what it says to me is that quite apart from all his other flaws, the man is too small to be the Mayor of Canada's biggest city.

But then he is a Con, and he is just pandering to his bigot base. Just like Stephen Harper does... 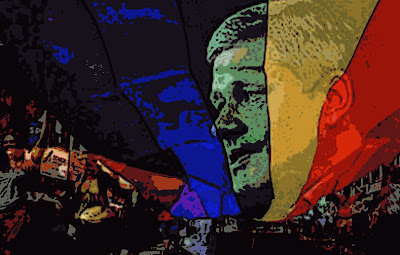 For in addition to all his many flaws, Harper is also a sworn enemy of LGBT Canadians. A man who has voted against every bill designed to make them equal citizens of this country, or protect them from hate crimes.

A man who still refuses to say he was wrong about gay marriage.

The legal effect would be nil, but that is hardly the point. Every gay teenager who is struggling to come out, every parent who is struggling to accept a gay child, every pastor or rabbi or imam or municipal counsellor or community elder who has ever stood in a pulpit or at a podium and preached anything less than total love and acceptance would hear the Prime Minister say what, for a decade, he has not — that all Canadians deserve every ounce of equal citizenship, and, in Canada, bigotry will never belong.

A man who has never apologized for this outrageous statement : 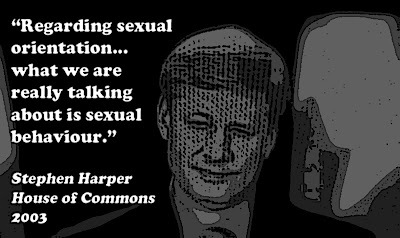 True, he has kept his promise not to reopen the issue. But if you think that “he may not support gay marriage, but he has not banned it, either” is an adequate reply, then replace “gay” with “interracial” and say it aloud.

So 44 years after homosexuality was legalized in Canada, anti-gay bigotry still festers, still hurts so many people, still snuffs out so many young lives. And we never see any government programs or messages aimed at fighting the hate that kills.

Like this wonderfully human, and very funny one from Australia, where gay people are still fighting for the right to equal marriage...

Oh sure, I know that in Canada we have gay marriage. But wouldn't it be great to see messages like that one, not just tolerating but CELEBRATING our differences?

And our common humanity.

Messages like the one a great bunch of kids sent to the Quebec Soccer Federation.

Because that's my Canada eh?

A country too big for the small minded cretins and bigots of this country, or ghastly Cons like Rob Ford and Stephen Harper.

Ford the goon buffoon. And Harper the shrunken leader of Little Canada.

“Canadian prime ministers in the past have had that broader perspective, so it’s not a case of saying ‘Here’s someone from Canada, they’re bound to be parochial’. That’s not the case at all,” he said. “It is that someone’s really not speaking for Canada, which is a G8 member, a G20 member, a major player in international affairs. And this wasn’t a speech from a big figure from a big country.”

Who would shame us in the eyes of the world.

Yup. They really are too small to govern.

We can't defeat them soon enough.

And our country deserves better... 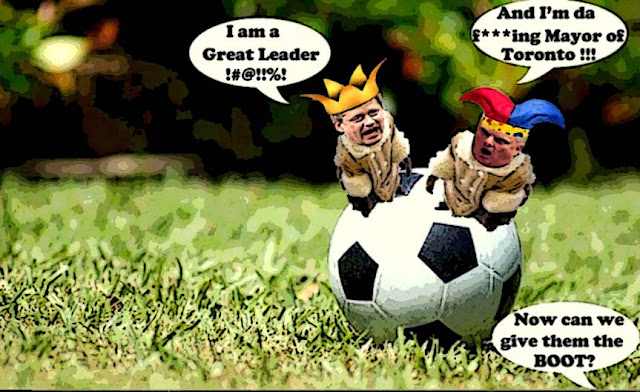 Harper is afraid to come out himself for whatever reasons, but his close personal relations and his closest advisers are all younger single men.

No small wonder the harpercons are conflicted.

While I certainly opposed the ban on patkas, and the article you posted is fine, there is an utter cesspool of bigoted hatred of Québec and Québecois people in the comments. It is even uglier than the original story, which was an act of ignorant stupidity on the part of a sport federation - not usually known for the most forward-looking attitudes.

I'm also glad you spoke of bigotry. It was certainly bigotry, ignorance and intolerance, but I'm not sure it was racism. There is a lot of misplaced and extreme intolerance for signs of religious belonging here, and a lot of it stems from our well-deserved loathing of our "own" Catholic Church.

I do have no use for fundamentalist religion, which is almost always misogynist and homophobic to the extreme. But that doesn't mean I won't react vehemently if a yahoo calls a Hassid a "dirty Jew" (this has actually happened, and the cretin threatened me as well).

Simon, as to the issue of tolerance of diversity, there is an important test case coming up before the Immigration and Refugee Board in Toronto this Tuesday involving refugee claimant Viktoria Mohacsi, a former member of the European Parliament from Hungary seeking asylum, citing death threats against herself and her family after her own investigation into hate crimes against Roma in 2008-2009 revealed alleged police complicity in the crimes. Not so far fetched given tales of police complicity in crimes against natives in Saskatoon, and similar scandals.

What is noteworthy in this respect is that the same individuals shouting out their hatred for Quebec in various media discussion blogs while providing self-righteous lectures on intolerance and minority rights with respect to dress codes regulations in soccer matches - glad that issue is resolved as well - are demanding deportation of this woman, on the basis of absurd prejudices and wild claims, labelling Roma as thieves, scam artists, pickpockets, criminals, welfare leeches, subhuman and the list goes with contributions such as :

"Like Somalis they are a criminal race but the politicians who let them in are worse criminals."

"The gypsies will never change, they take their kids out to beg and steal, they do not send their children to school, they are violent, aggressive and lazy...they will bleed the system dry.."

"the gypsy a big problem everywhere, nobody want to work, just drink, party, and to steal anybody's stuffs, to break houses, etc.....
Oh, of course, and waiting for the welfare money."

"If she's allowed to stay be prepared for another political activist marching in our streets, using Canada's free speech laws to support her old EU values and agendas. Not to mention where her living allowance will come from."

"She is a test case. If they let her stay then all of the gypsy asylum seekers will be allowed to stay. That would be a disaster with Canada being flooded by eastern European Roma."

"she has been in Toronto, but do not speak english...obviously one needs to learn a language to work. she does not want to work, she is a freeloader. send her back. send all of them back. they are only want free handouts...and have children....just like the useless Muslims."

Anyway, you get the idea of the opposition she faces from a hostile Conservative electorate coupled with the fact Harper, Kenney, Ezra Levant and company consider her case to be the important test for their current pogram against Roma refugees, so I believe she deserves some support and a show of solidarity. According to the Reuters article, she volunteers at a local Roma community center in Toronto, where she may be reached..

hi anonymous...I don't know if Harper himself is secretly gay. I hope not eh? It would be a devastating blow to my self esteem. ;) But yes his inner circle is an all boys club, and they are all bachelors, and with all that's going on I'm pretty sure they are all conflicted...

hi lagatta...I am aware of the sickening way a lot of Canadians reacted to the decision of a handful of people, to brand everyone in Quebec a racist. I thought of addressing it in the post but decided to simply say what I thought it was; probably not racism just narrow thinking from from a bunch of not very bright sport's bureaucrats. I do hope the whole executive of the QSF resigns after the fuss they caused for no good reason. And yes I'm like you, I have absolutely no time for any religion, but I won't stand by and watch anybody be bullied...

hi Rene...thanks for the info. I'm extremely interested in the plight of the Roma, and what is being done to them in Europe, and in Canada by Jason Kenney and his Con klowns. Picking on the Roma, after all that has been done to them, is simply beyond the pale. The actions of cowards and bullies. If I didn't know better I might start to think of the Cons as sub humans, and give them a taste of their own medicine. But since they are such racists, and they have the nerve to call others racists, I can only conclude they are insane...