Stephen Harper: The Booze Tour and the Apocalypse 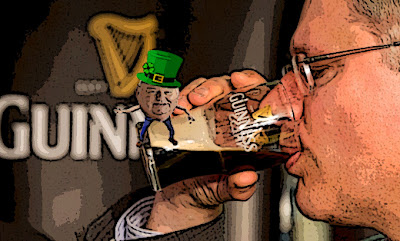 The Tour has gone off the rails, and he's fallen off the wagon !!!!!

He can't get a deal. He can't get away from Old Duff. He's desperately seeking sexy photo-ops to try to make people forget all the scandals.

But today all the boys in the PMO could scrape up for him was this miserable one.

Read it and weep. Or laugh like I did.

Ask yourself does Harper have another problem we should know about? 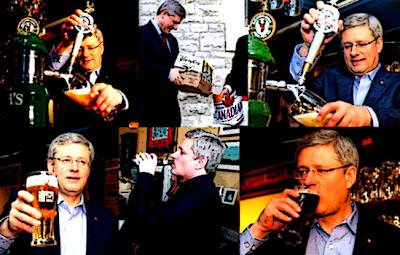 And then start digging a BOMB SHELTER.

Because shortly after that, and no doubt still under the influence, Great Guinness Leader staggered into a news conference and went after Vladimir Putin !!!

Prime Minister Stephen Harper says he is drawing a clear line between Russian President Vladimir Putin and the rest of the G8 leaders when it comes to Syria.

"Look, I think that dialogue will be interesting. I think it's important to have that kind of dialogue. But I don't think we should fool ourselves. This is G7 plus one. OK, let's be blunt. That's what this is, G7 plus one," Harper said Sunday.

Which probably isn't a good idea eh? Not with the bloodbath in Syria threatening to set off an all out war between the Sunni and the Shia.

One that could engulf the entire region, draw in the major powers, and lead us to the brink of the Third World War.

Not when we need to get the Russians onside, rather than isolate them further. Not when cooler heads are needed.

And not when you're dealing with a man like Putin... 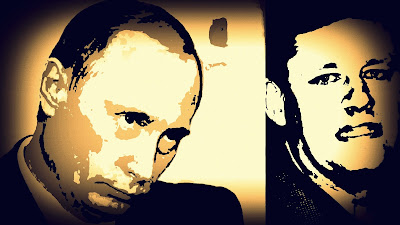 Who being a gangster himself, probably doesn't like being accused of hanging out with thugs, by another mob leader like Harper. Which might only provoke him, destroy any chances of a deal, and make the situation even more dangerous.

And BTW let's not forget that the last time the two dictators went head to head, Great Ugly Leader didn't exactly come out on top.

But then Harper doesn't care, he's just trying to make some headlines to get the other leaders to notice him, and try to impress the folks back home.

Especially his rabid religious base, who believe that The Messiah can't return until after the Battle of Gog and Magog.

When the Russians invade the Middle East.... 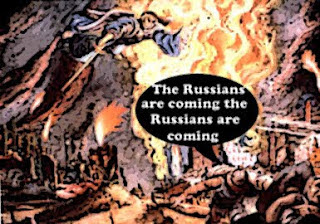 The popularity of this theory during the Cold War can be seen in that it was openly advocated in 1971 by the then Governor of California, Ronald Reagan. During a dinner address to state legislators Reagan said "Ezekiel tells us that Gog, the nation that will lead all of the other powers of darkness against Israel, will come out of the north. Biblical scholars have been saying for generations that Gog must be Russia. What other powerful nation is to the north of Israel? None.

So for them the Third World War isn't something to be feared eh?

It's something to be WELCOMED !!!!

Yup. We're in the hands of a crazed cult, and its increasingly desperate leader.

But Stephen Harper should know this:

He can run, he can drink heavily.

He can hope the world ends, before the police arrive to arrest him and his Con gang.

But he'll NEVER get away from Old Duff... 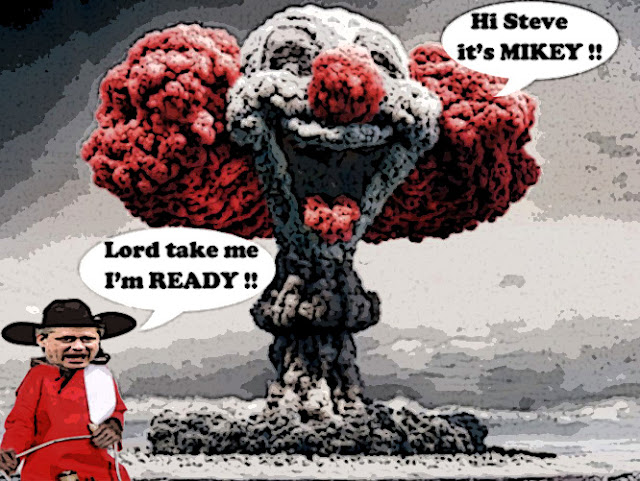 Nope. Harper is just doing his "normal guy" routine. And for him, in Ireland, that means beer. He's a control freak. Like Putin, I think he's addicted to nothing but power.

Oh Lord, I beseech you, please remove these destructive idiots from our plane of rational existence. Thank you. Amen

Well if Russia is Gog, Magog is to be found in Quebec about 120 km east of Montreal. Suddenly the war-mongering ravings and threats of deranged Harper minions on media discussion blogs fall into place in some semi-coherent plan. They plan to wage war simultaneously against Quebec and Syria, assisted by mercenary flesh-eating hordes.

And the Roma minions of the Dark Prince, dispatched to our shores to commit thievery, mayhem, sabotage and other dark deeds are to be rounded up, crushed or repelled. We hold such knowledge of their treachery and evil from such renowned authorities as historian Bram Stoker...

The Immigration and Refugee Board hearing of Roma human rights advocate Viktoria Mohacsi scheduled this Tuesday in Toronto is but one milestone in the upcoming battles ...

Harpo can add Putin to a long list of world leaders he has totaly alienated. Master Statesman, not.

With Mike Duffy in the news, an interview with Rick Mercer from 2007 came my way..."A day in the life of Mike Duffy"

This is before Duffy was appointed Senator and after Harper was first elected.

I raise this because I was alerted by Duffy's choice of words - he said "Harper was elected to power."

Now I don't think I've heard it put that way before - usually people say they are elected to office or to govern or to serve but not elected to POWER. If Duffy was using this language, it must have come from somewhere.

And Simon, you've got it - Harper is clearly a power freak, and backed by his oil-powered funders, he's there to control the energy agenda.

hi lagatta...yeah I suppose there was that too. You can't go wrong with beer eh? Except how many "normal guys" drink Guinness like he does? Harp Ale OK, but that horrible black swill served at room temperature? *Shudder* ;)

hi Rene... Personally I've always believe that Gog in Quebec is Rouyn-Noranda where Christie Blatchford was born. ;) But I want you to know that I have scuba dived in Lake Memphremagog looking for the legendary monster. The expedition only lasted about fifteen minutes, until I realized the water was so murky if there was a monster by the time I saw it it would have eaten me. And jumped back into the boat while my friends killed themselves laughing. On the other hand I found Magog quite pleasant and saw no signs of the Russians...

hi Steve... Yup. It's all part of the same character flaw. You can see it in his foreign policy, you can see it in his high school yearbook. He just likes to say things that make people say OMG did you hear what Steve said? He thinks they're flattering him, but sadly it's the opposite. They just think he's a freak. But then what do we expect? He's a man who had hardly ever left the country before he became Prime Minister. An embarrassment if ever there was one...

hi anonymous...Yup. You got it. A total power freak and at the same time a willing stooge of his Big Oil masters. I often wonder whether if the Liberals had stayed in power Duffy would have sucked up to them in search of that Senate seat. I wouldn't be surprised he's such a shameless scoundrel. But power was a Harper candle, and like a moth, into it he flew... ;)