Stephen Harper and the Scandalous Cons 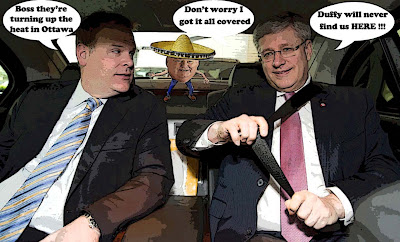 Well there there they were today, driving through the streets of London, England, in the getaway limo.

John Baird and Stephen Harper doing their best to try to escape the Senate scandal.

But sadly for them the stench followed them everywhere, even into the British Parliament.

Earlier, in London, Harper delivered an address to British parliamentarians but the special moment may have been marred a bit afterwards when Baroness D’Souza, speaker of the House of Lords, raised the mess back in Canada’s Senate in Ottawa.

Thanking Harper for his speech, D’Souza induced a chorus of chuckles from British Lords and MPs when she said the upper chambers of Parliament in both countries are under pressure to reform.

And so did Duffy AND the police.

The RCMP has launched a criminal investigation into the actions of Nigel Wright, the prime minister’s former chief of staff, in connection with the Senate spending scandal that led him to give $90,000 to Sen. Mike Duffy.

And then tonight there was Pamela Wallin, going on the CBC to claim that she didn't mean to abuse the system. And she's sooooooooo sorry.

"I sign the documents, so I take responsibility," the former journalist and diplomat said. "I take full responsibility for this. I should have gone over it with a fine-tooth comb as anybody should and make sure, but I just didn't." "I was doing what I thought my job was — to not sit in Ottawa in an office, not sit in the Senate chamber always, but to be out there."

But that's what happens when you're trying to set an example for others eh? 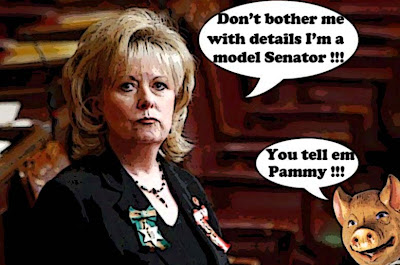 And as if all of that wasn't enough to ruin Harper's day, then there was the strange case of Eva Adams.

Questions are being raised about how Elections Canada is handling MPs' campaign files after the agency refused to allow CBC News to see documents in the campaign file of Conservative MP Eve Adams.

After viewing the file of Conservative MP Eve Adams, it was clear that some correspondence was missing.

And the ghastly spectacle of Dean Del Mastro, his Parliamentary Secretary, blaming Elections Canada for his alleged case of electoral fraud.

The Cons really are a sorry sight. Battered by one scandal after another, drowning in corruption.

No longer a real government, just an increasingly desperate cult going down with its depraved leader. Who can run, but cannot hide, and will not escape his fate.

Oh boy. I know I keep repeating myself. But I don't know what else to say.

It has been such a long struggle. And I'm so tired.

But soon it will be over.

And a better day is dawning... 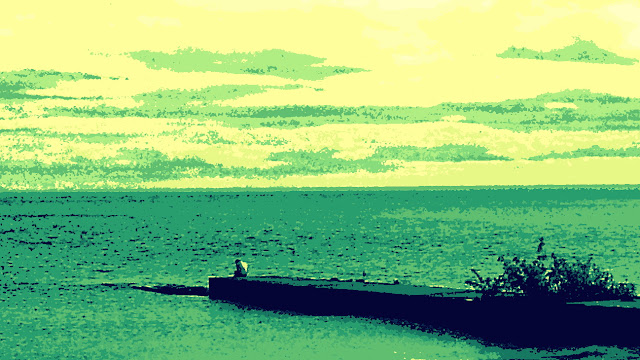 Michael Sona worked for Eve Adams up until he was fingered for the robocall fraud. And then there is her relationship with Dimitri Soudas, which makes his reason's for leaving the PMO somewhat dubious (left shortly after the election to spend more time with his family).

Even so, the senate said. The RCMP must not be impeded in their investigation? Seems it is well known Harper and Toews control the police. It was the same with Elections Canada. It was Harper who stonewalled and blocked that investigation as well.

Harper is using every dirty tactic in the book, to stay in power. If we don't watch our backs, we will have knives in them.Ex BC Liberal Premier Gordon Campbell was glued to Harper's side, while he was in England. Campbell is Harper's favorite henchman. Both Campbell and Harper did a lot of dirt to the citizens of BC. Campbell also twice lied and cheated to win his elections too, just as his good buddy Harper did.

And the world now names Canada as the new pivot in the axis of evil.
http://www.theglobeandmail.com/commentary/by-avoiding-tax-evasion-rules-canada-becomes-the-bad-guy-of-the-g8/article12552337/

Who's the guy in the French beret behind the Dean of Mean? I thought hats were prohibited in the Commons. Or is this another of the "special rules" for Cons?

hi Beijing...Michael Sona and Dimitri Soudas? What a small world and what nice company. I saw Adams on Power and Politicts recently and she was so mouthy and just plain rude, she made an absolute fool out of herself. Clearly her case needs some serious investigating...

hi anonymous 1:14...yes, the state of the RCMP, and Vic Toews in charge, really does raise questions about whether it can do the job that needs to be done. On the other hand there are so many unhappy RCMP members some might be inclined to go the extra mile to shaft the Cons, or restore the force's reputation, so I'm not giving up on them yet...

hi Steve...yeah that's precious isn't it. They've been going after Justin Trudeau because some Senator owes money to Revenue Canada, while the Cons shelter the billionaires in their foreign tax havens. They really are the hypocrites of hypocrites AND the scum of the earth...

hi anonymous 2:20...I believe the guy was wearing a beret to pay tribute to the military. But it defintely does bear investigating. Knowing how loyal the Cons are to Canada, it could be a foreign agent... ;)

That's Royal Galipeau MP for Ottawa-Orléans. He's been wearing that for awhile now. Not sure why. Though I am sure if it were another MP of differing political stripe Cons would be harping about it from the Commons rafters.

He's just asserting his religious identify while in Ontario.