Stephen Harper and the War on Alexandre 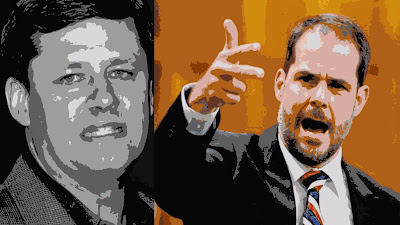 Alexandre Boulerice is one of my favourite MPs.

He's a big guy, and when he gets up in the Commons and shouts at Stephen Harper, you can see the tyrant flinch wince wobble.

Which is a spectacle I rather enjoy eh?

So you can imagine how outraged I was to see Great Wobbly Leader launch an all out attack on the big guy, when he wasn't there to defend himself.

Over something he once said about the First World War !!!!

Prime Minister Stephen Harper has come out swinging against New Democrat Alexandre Boulerice for the Quebec MP's 2007 blog post that praised communists who opposed the First World War and cast the conflict as "a purely capitalist war on the backs of the workers and peasants."

Even though Harper's inflammatory overreaction must surely lead most sensible Canadians to question his sanity.

And even though, as Aaron Wherry points out, Boulerice is in good company, the story is almost as old as the War to End All Wars.

And Harper probably shouldn't be reviving old ghosts like the Conscription Crisis. Not when it bitterly divided the country, and led to some of the most violent riots in our history.

Because not every Canadian or Canadien wanted to fight and die for Britain eh? 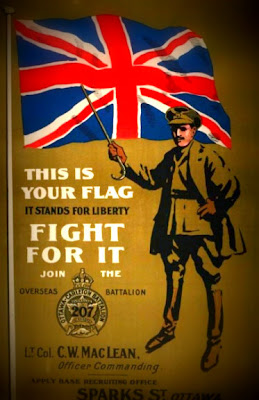 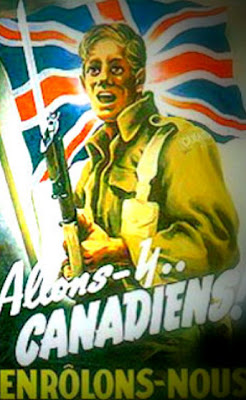 And even in Britain, where the Cameron Cons are also trying to whip up a patriotic frenzy over World War I, to distract attention from their War on the Poor, many consider that old war to be nothing but a savage, imperial, bloodbath.

The war was a vast depraved undertaking of unprecedented savagery, in which the ruling classes of Europe dispatched their people to a senseless slaughter in the struggle for imperial supremacy.

This wasn't a war of self-defence, let alone liberation from tyranny. As the late Eric Hobsbawm sets out in his Age of Empire, it was the cataclysmic product of an escalating struggle for colonial possessions, markets, resources and industrial power between the dominant European empires.

Which leaves me wondering why is Stephen Harper so obsessed with old wars?

For surely wobbly is no warrior... 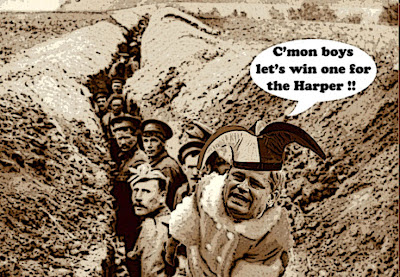 And the only thing I can think of is that he must be DESPERATE.

Desperate to distract us from what he is doing to this country. Desperate to pose as a patriot as he sells us out to foreign interests, and gives our jobs to foreign workers.

And of course, desperate to boost his sagging polls. Even if it means ripping the scars off old wounds, and dividing the country again.

Oh boy. And what more can I say?

Except oh what a ghastly leader MANIAC.

And, because you know I can't resist this song eh?

And of course, oh what a lovely WEEKEND.

Have a great one everybody...

Defending WWI against any sort of criticism?? That's crazy. I guess harper never saw a war he didn't like for other people (people besides himself) to die in.

This is the right-wing version of "politically correct." You must never criticize war, soldiers or the generals and politicians (on your side) who wage them.

Wait 'til harpo and bairdler show you all their medals they won when they fought at Dieppe or maybe it was Hamburger Hill or was it the Tet offensive? I always get them confused 'cause I went to CON history classes so it gets a little fuzzy after 1812. Then you'll all see what kind of warriors those guys are. Yessirree bob!

Harper has no clue as to, how idiotic he sounds. He could care less about our WW11 Veterans. Why in the hell would he care about WW1? He treats our military members of today, as absolute dirt. Harper is an, utter laughable farce. If Harper's mouth was any bigger, he could get both of his feet in it.

You have no idea? How much I would love to see Harper in an armed firefight, on a battlefield. Harper would not be, permitted to have danger pay. If Harper was maimed for life? T.F.B. he would have a very reduced pension and, be thrown into the garbage pit. That is what he is trying to do to, our old and young War Veterans and, to our enlisted military members of to-day.

During WW1 and WW11 our young Canadian boys were shot and blown to bits so we wouldn't have, a monster such as Harper governing this country. If Harper served in either war? I doubt, he would have got out of his foxhole alive.

All Harper is winning is the complete contempt, of most Canadian citizens. We know Harper's list of degenerates working for him, is as long as a football field. What Harper doesn't know is? Canadians have always been proud, of our enlisted military. To most Canadians, our old and young Vets come first with us. We want them cared for, come hell or high water. Scores of Canadians said, they were willing to give something up, to have our old and Young Vets cared for. This was when, Harper was trying to get out of paying a pension, for our young military members, who were maimed. He was going to toss them, on his huge garbage pile. That's the same place, Harper throws the every day Canadians.

hi thwap...I am all for recognizing our Canadian military history. But picking a fight over World War I, is not the best way to recognize our nationhood. For there are a lot of things about that war that are best forgotten. Like the bitter division between French and English, or the fact that many Canadians were fighting to prove that they were as British as the British. Or such things like the horrible fact that we were so British, we allowed the British to shoot our soldiers for desertion or shell shock, unlike the Australians.
I suggest that if we celebrate our military history we should focus on World War Two instead, when we were all united, fighting and dying to defeat the Nazis. And our peacekeeping missions that defined our values better than any others did...

hi anonymous...the only medals Harpo and Baird ever won were the tinny things they handed out after every meeting of the Ayn Rand Club. The Bottle Top of Selfishness, and the Nerd Order of Savages... ;)

hi anonymous... I try not to think about the way Harper is dishonouring our military by using it for political purposes, while as you point out abandoning our wounded soldiers. It gives me nightmares. Like the one where I'm about to go over the wire eh? And I look behind me and there is Harper. He's trembling like a jello, and saying: "Don't worry Simon, I'll cover your back."
I have a lot of nightmares about the Con regime, but that's the one that always wakes me up screaming... ;)

Anti war = public enemy according to conservatives . And weren't these the same gems praising canadian involvement in the boor war where the Brits fought the Dutch farmers with the help of the blacks but signed a treaty excluding the blacks? Tripartite = apatite sound familiar canada what about the Brits and the French with the Indians beating off the us . Tripartite =apatite =quadraphenia. Or how is it that before ww2 ended they already had commandos transferred to Korea while they could have prevented ww2 by invading Spain pre 1935. Die for purposeless war or oil suckers . And drones we want those don't we?

More likely Harper would frag your ass, can we assume you know what fragging is?

I see that Brian Lilley has joined in the denunciation of Boulerice's comments on the first world war by labelling Boulerice a Communist, as it stands to reason that anyone who condemns imperialist war and capitalist exploitation must be a Communist, and then skirts the issue of the actual history of that war, how it divided Canada, to lecture Boulerice on the evils of Stalin, Mao, Pol Pot et al.

If I recall the Catholic Church - leaving aside the issue of their participation in atrocities they go on to condemn - has on numerous occasion published treatises condemning war and capitalist exploitation, organizing trade unions and so forth. In Lilley's simplistic Reform worldview another gaggle of Communists hiding behind their Catholic garb.

If I recall further, during the conduct of this war, former Liberal cabinet minister Henri Bourassa, who had broken with the Laurier government over what he deemed betrayal of minority religious and language rights in the new territories of Saskatchewan and Alberta and capitulation to Anglo bigots on the issue of French language rights in Manitoba waged an anti-imperialist campaign in the pages of Le Devoir, condemning the war, the conduct of the war, its objectives, the abrogation of liberty in Canada, conscription in terms similar to that attributed to later-day Communists by the then ignoramuses of the Orange Order, anglo-chauvinist Empire loyalists and echoed today by the Reform party, rechristened Conservative Party.

Bourassa argued, quite reasonably, why should we fight for freedoms in Europe we are denied on our own soil, and that the struggle against the Prussians should be waged in Ontario, not Flanders. The Ontario Orangists countered that a vote for Laurier was a vote for Bourassa was a vote for the Kaiser. Bourassa was denounced as public enemy supreme in English Canada, a reputation today equalled by the notoriety of the Tsarnaev brother in Boston.

And of course the bloodthirsty anglo-chauvinist lynch mob warmongers throughout the rest of Canada, precursors to modern day Reform chauvinists, were itching to spill Bourassa's blood or that of enemies near or far, and were given the opportunity to engage in battle and spill Quebecer's blood during Easter anti-conscription riots in Quebec city in 1918.

Perhaps the Reformers will organize a celebration in Quebec in 2018 to celebrate the event and their victory over the anti-conscription rioters.

I have not worn a Poppy on Remembrance Day for more than a decade now. Celebrating and glorifying that senseless conflict is anathema to me. I also despise the entire patriotic industry built up around the Battle of Vimy Ridge and what it supposedly represents to this country. The Battle of Vimy Ridge bound us together as a nation? The B of VR was about a group of boys, murderously taking a hill from another group of boys. A hill. A far away hill. I call bullshit.

Hi Simon, in case you're wondering why I show up on these old posts it's because I post some of your stuff on Facebook and have done so for quite a little while. They in turn show up on my On This Day feature where I was again see them and then sometimes comment. :)