The Apocalyptic Destruction of The Harper Cons 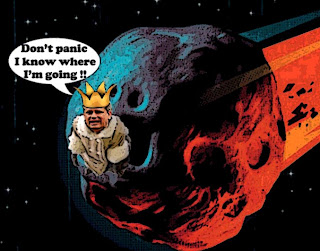 Damn. As much as I hate doing it, I'm going to have to give Boss Harper some credit eh?

The final collapse of his Con regime is turning out to be a heavenly show. And far more wonderfully apocalyptic than even I had hoped.

For if on Wednesday it was Wallin, flying through the air on the public dime.

Late on a Friday afternoon it had to be Dumbo Duncan, crashing to earth like a meteorite.

Aboriginal Affairs Minister John Duncan has resigned from cabinet, Prime Minister Stephen Harper said Friday. Duncan released a statement minutes after Harper's, in which he admitted to writing a reference letter for someone with a case in front of the Canada Revenue Agency.

And surely it's only a matter of days before Jimbo Flaherty becomes the next Con space cadet garden gnome to land on his head. 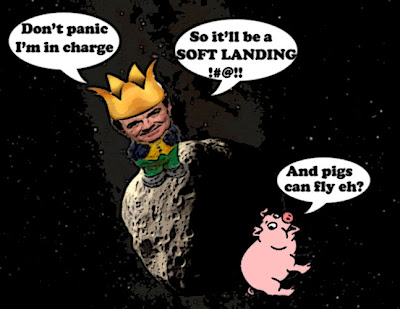 Finance Minister Jim Flaherty urged the federal broadcast regulator to grant a radio licence to a company in his Ontario riding even though government rules on cabinet responsibility forbid ministers from influencing the decisions of administrative tribunals.

For isn't little Jimbo guilty of doing the same thing Duncan did?

And then there's John Baird, who as you know can propel himself through space at incredible speed, and in every direction, with only the exhaust fumes from one or both orifices.

Why just the other day he was criticizing a religious group for its foul anti-gay statements. And being muzzled by the sinister theocons in the PMO. 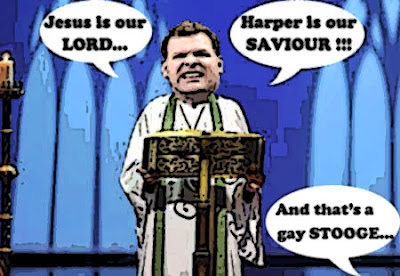 And inviting religious groups to come and party with him, at the swearing in christening of a new taxpayer funded heavenly ambassador.

The Conservative government is set to announce an ambassador to promote religious freedom next week in the Toronto area.A spokesman for Baird would not confirm details of the event, but said that the initiative “is a priority for our government and is part of our principled foreign policy.”

Can you believe that? "Principled foreign policy?" From a government that is funding an anti-gay group in a place like Uganda? Have you ever heard anything more ridiculous, or more OBSCENE?

And since when is it a Canadian government "priority" to protect religious groups? When it's the decent people of the world who need to be protected from THEM.

Oh boy. How are we expected to worry about an asteroid when this giant Con turd is bearing down upon us? 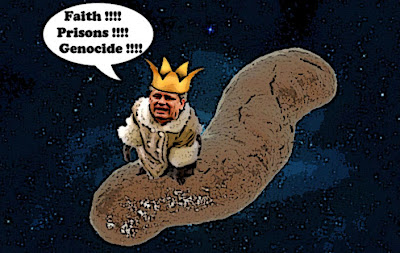 Although don't panic, just hold your noses eh? Because the stench may be ghastly, but the writing on the wall is all good.

For have you EVER seen a government flame out, or self destruct, in such a spectacular fashion? Isn't it an awesome sight? The scandals, the corruption, the robocalls, the religious fanatics. By the time the next election arrives the monstrous turd should look like a sheep pellet.

And we'll be able to flush those grotesque Cons all the way to hell and back.

Which no doubt explains why in his moments of madness, which are becoming more and more frequent, Stephen Harper is strapping on his jackboots.

And singing this old song...


Yes indeed. Never will the eve of destruction be so BEAUTIFUL as the day before the Cons crash and burn.

Golly. I can't wait for THAT asteroid eh?

I drove through your namesake yesterday, even more filthy than last time. Trash all over the place. Shitty roads. Graffti everywhere. Tell me Simon, why do Montrealers choose to live in their own filth? Are they really so dirty? Was it just a bad day?

Or are they the vermin I suspect they are.

hi anonymous...I suspect your comment reveals more about you than it does about Montreal. But I'll still offer you the same friendly advice I offer all smelly rednecks from Alberta. Have a bath and wipe your bum, and the flies won't follow you around...

Very sad but true Simon. We have an evil tyrant governing this country, making life miserable for most of us.

Just remember this. What good did hate do for, Stalin, Hitler and Mussolini? Stalin lay up the stairs, dying in his bed. Not one person lifted a finger to help him. They didn't even get him a doctor. Hitler committed suicide. He knew his evil had caught up with him. Mussolini was assassinated and strung up by his heels, along with his mistress.

Dictators become paranoid about their safety. They had to watch their backs, for as long as they lived.

Harper is becoming paranoid, about his safety too. Flying his armored vehicles around with him. He even gets booed in other country's. Most country's can't stand Harper. His security bill was, $47 million. Wonder how much his security bill is today? Rumor has it, Harper's Ministers really don't appreciate, being controlled by him. It's common knowledge, Harper is a control freak. Seems to me, the Exodus may have started.

Must admit...even though I"m from the heart of oil sands country, Alberta, I had a good chuckle at your rejoinder.

hi Way Way Up...I was wrong to mention Alberta, because although most of the anti-Quebec vitriol comes from there, people like that troll can come from anywhere. So excuse me cowboy.... ;)

there is a special kind of Alberta arrogance...based on wealth, ignorance and apathy. Nothing destroys a society faster than oil wealth.