The Quebec Students and the Great Victory 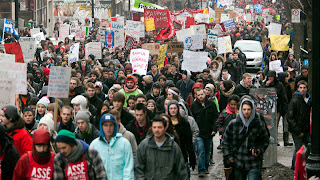 They marched for three months. In the cold of February and the chill of the Maple Spring. Many of them were roughed up, or arrested for no good reason.

For most of that time the corrupt Charest government refused to talk to them, just tried to divide and conquer.

They were infiltrated by a handful of hooded thugs who tried to smear their movement as violent. When the students were overwhelmingly peaceful... 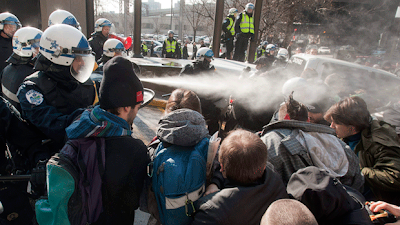 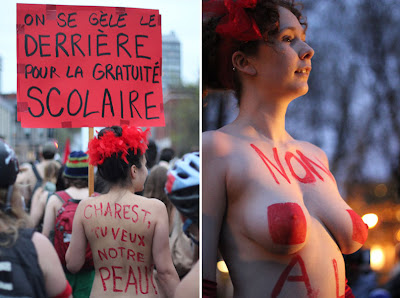 But still most in our Con media jumped on their backs like rabid monkeys, screeching for them to be crushed and humiliated. And all across this country old people howled for the blood of the young. Or for Quebec to be driven out of Canada.

Quebec’s place in Canada was another subject for hot debate. That started with a Tuesday letter from former Reform party MP Lee Morrison, titled: “It’s time to say au revoir to Quebec.” In commenting on the student strike, Mr. Morrison noted: “If the province’s future political and economic elites are too greedy and stupid to realize that life in the real world isn’t one continuous visit to the free lunch counter, there is no hope for Quebec society.”

But the students never gave up, and today they are celebrating a great victory.

Under the new agreement, the government’s proposed $254-a-year fee hike over seven years remained unchanged. However, this increase will be reduced an equivalent amount by trimming the surcharges universities charge students each year. Students currently pay an average of $800 in annual university surcharges which usually fund non-academic activities and various student services.

I know some students won't be satisfied. Like them I believe that a straight freeze would have been better. But the semester is threatened, this does offer a bit of a break. And if students end up paying  instead of more, they can always return to the streets.

But for now I think it's an honourable compromise like the kind Canadians were once known for, when we were a decent country admired all over the world, instead of the reactionary pariah state we are now.

And it NEVER would have happened if the students hadn't stood up and fought for their rights. Which makes me really happy. But no doubt will make the BC columnist Gary Mason even crazier than he sounds here.

The Quebec uprising is a farce, led a group of self-absorbed brats, basking in the glow of often fawning media attention. They are nothing more than spoiled kids demanding to have their way. It is time they are ignored until they stop their whining and grow up.

But then what do you say to a guy like that eh?

Except Gary, please, get a grip on yourself. Even if I removed the Rockies you'd never be able to see far enough to understand Quebec.

For it is a very different place... 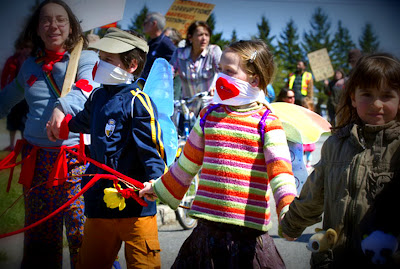 And thanks to people like you, and the redneck Reformers from Alberta, and the criminal Con regime, it has never been so isolated. For standing up for our precious Canadian/Canadien values.

So STFU up you reactionary old fart.

Some farce. Some spoiled brats.

And for the victorious students of Quebec I have only this message:

Merci/thank you for making me feel so proud of you, and so proud to be a Québécois.

You're right. The students have proven what determination can accomplish. The rest of us could take a lesson from them. Their example demonstrates it is going to take time to get what you need & you have to be prepared to go the distance, which they did.

Now if other Canadians took a good look at the students' example of what can be achieved maybe we could stop things like the pipelines & tankers in B.C.

The people in Alberta may have to go out continuely to get their twinned highway 63.

Many of our current governments in Canada won't understand anything less than huge demos over extended periods of time. I think Charest finally saw the writing on the wall. This was not going away. Good on the students.

Gary Mason, the irrelevant old codger, should roll his stupid globe and mail newspaper and shove it up his ass.

Because his newspaper is a piece of shit and that's where it belongs.

For a sanctimonious old fart like him, working for a newspaper that endorses both 1) an asshole like stephen harper who has besprayed his filth all over our Parliament and 2) the miserably failed economic policies that have damage public finances so extensively, ... to even presume to lecture Quebec students about being spoiled ... it beggars belief!

Fools like Mason haven't grasped the extent of their own total intellectual irrelevance. They are cling-ons on the asshole of Canadian capitalism.

Plans are in the works for a convoy to head to Edmonton for the opening of the Legislature. Interesting that our PC MLA apparently has his office in an area of town the furthest from the residential areas.....speaks volumes.

It seems there is a huge divide between Quebec and elsewhere. It is especially noticeable in the cities vs. rural areas in the ROC, while Quebec (with the possible exception of the area surrounding Quebec City) appears united on the left.

A good example - if you drive on the 401/20 or 417/40, you instantly go from progressive liberalism to Tea Party conservatism as soon as you cross the border in terms of popular views. Even the French-speaking population outside Quebec seems a lot more conservative. The MP for that area is among the most anti-abortion in Canada, and still opposes same-sex marriage even today (yet still gets elected in a landslide).