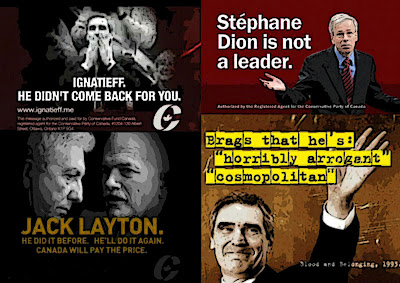 It's like a recurring nightmare. The ugly images, the leering voice. Stephane Dion is NOT a leader. Michael Ignatieff didn't come back for you. Jack Layton did it once he'll do it again.

And now comes the latest attack ad from the diseased brain of Stephen Harper: Thomas Mulcair is NOT a Canadian.

Thomas Mulcair, the Quebec MP and NDP leadership contender, carries two passports. One is Canadian, the other is French.

“Obviously, it’s for Mr. Mulcair to use his political judgment in the case,” the Prime Minister observed in Saguenay, Que. “In my case, as I say, I am very clear. I am a Canadian and only a Canadian.”

The shameless Con who is letting a giant foreign corporation crush Canadian workers.

And is selling out our country to China.

Sadly some Liberals are also willing to play along. Even though Jack Layton was wrong.

In 2006, Mr. Layton said he “would prefer that a leader of a party hold only Canadian citizenship, because one represents many Canadians, and for it’s better to remain the citizen of one country.”

Two wrongs don't make a right. And their turn will come... 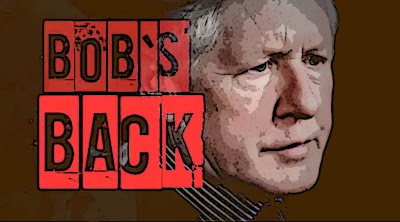 Even though the advantages of working together are only too obvious.

Primarily because of the results in British Columbia and the Prairies, but also the close race in Ontario, these numbers would result in a small Conservative plurality of 118 seats. The New Democrats would take 103 and the Liberals 74, with 12 going to the Bloc Québécois and one to the Greens. If they could co-operate, the Liberals and NDP would be able to govern with a stronger majority than the Conservatives currently enjoy.

Can you imagine what we could do with a majority like that? We could reverse everything the Cons have done, investigate their dirty games, and jail them in their fancy new prisons.

While always working to unite progressives to fight the common enemy.

And in the meantime, on a cold, snowy, and REALLY Canadian day.

Here's an attack ad we can ALL enjoy...

The Queen is not Canadian, but at least she's white and British--not very foreign to the Harpercons.

I'll stop carping out the hypocrisy of the NDP response on Mulcair when any one of the NDP leadership candidates apologizes to Stéphane Dion for the nativist bullying that the then NDP leader joined in 2006.

Those nativist attacks on Dion were shameful as are the attacks on Mulcair.

And they were made in the name of the NDP by its leader.

It's nice that some progressives take offence, but the NDP needs to make amends.

hi Skinny Dipper...now don't get me started on the monarchy or I might say something uncouth. ;) But yes this whole nativist shite is ridiculous, when so many Canadians have dual citizenship, and it doesn't make them less loyal citizenship. Which is why I included the winter video at the end to show what REALLY makes us Canadians...

hi C4SR...now come on, you're so much better than that. I'm a huge admirer of yours, and nothing you say on this issue is going to change anything. Jack was wrong to say that about Dion, but I believe he admitted he was wrong before he died. Dion is defending Mulcair. And the only one who stands to gain from this is phony issue is Stephen Harper. We need to bury the past, and focus all our energy on defeating the Cons. And we need YOU !!!!!! :)