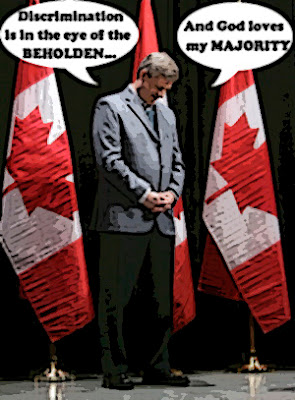 Praise the Dark Lord. I see that Stephen Harper has a shiny new present for his religious base.

Early in 2012, the Tories will finally flesh out a campaign promise to install the Office of Religious Freedom within the secular confines of the Department of Foreign Affairs – a controversial pledge that has drawn accusations of vote pandering and blurring lines between church and state.

To whom he is beholden, for faithfully sending him the cash he needs to fund his Office of Perpetual Political Warfare.

To which I say Hallelujah and God bless his righteous majority.

But here's what confuses me eh? How can he stand up for religious freedom abroad, and ignore what is happening in his own Calgary backyard? Does he really support Ezra Levant's bigot excrement?

What would he say to those in his religious base who would criminalize abortion, and sabotage efforts to protect  bullied gay kids?

And would he really support a deranged wingnut like Artur Pawlowski? 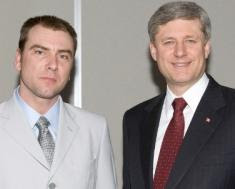 So you be the judge.

You know a lot of Canadians who believe that Stephen Harper can't be seen to be feeding his religious base, are forgetting one very important fact.

When Harper in his blood lust to destroy the Liberals decided to phase out subsidies to political parties, he also hurt his own Cons. Who were the biggest recipients of that money.

So when those subsidies are completely eliminated before the next election, he will need those looney loonies more than he ever has before.

And if he doesn't feed them, they won't feed him.

Yup. Stand up for freedom of religion by all means.

But who will protect us from the religious extremists? Who will save the bullied children?

And who will spare us from Stephen Harper? 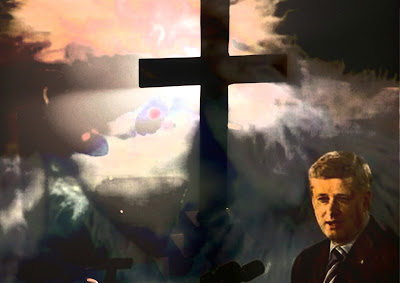 Why do you think Harper is lowering taxes on corporations?

He'll have more money for his next campaign than God.

The sheeple have no idea what they are in for... but they had better figure it out.

Harper is a Reformer, and he did found the Northern Foundation Party, in 1989. Harper's claim to being a Christian should be voted, the funniest joke of 2011.

Canada has become a vast pit of corruption. Other country's are shunning Canada, because of Harper.

In Durban, Harper was bullying country's to accept the dirty tar oil. He pulled Canada out of the Kyoto Accord, because he is trying to con every country he can, to take the dirty oil. Harper's greed is disgusting. He embarrassed us in Copenhagen. He lost Canada's seat in the U.N. At every meeting of the nations, he always manages to anger everyone present.

Harper is called, a petty gasbag, arrogant, stubborn, impossible to work with and co-operates with no-one. Country's are fed up with Harper's hissy fits when he doesn't get his own way. Harper is a total p.i.t.a.

Not only does Harper lower corporate tax. He gives, banks, mines, large company's and oil and gas corporations, billions of our tax dollars. Seen on the House of Commons TV channel. These dirty deeds, are now done behind closed doors. Harper thieves from us, to give to the wealthiest outfits in the world.

Harper had a many time convicted American criminal working for his. I agree with the people who say, Harper did not win the election, on the up and up.

Harper's claim, he is a christian certainly has me confused. Now given I do not believe in any religion, I still went to church as a child. I do remember some of it.

Lets see now, there was that stuff about sharing with the poor, not killing, forgiveness, etc.

I've got a feeling this guy needs to read his Bible again because he doesn't seem to be representing any of the things I remember we were taught in sunday school.

hi C2... Yup. You're absolutely right.
They'll be passing the cowboy hat around in the offices of big business, and anyone who doesn't pay up is fired.
And of course, every contribution will be the legal maximum. But what worries me is how will they milk more money out of their rabid base? For I doubt this Office of Religious Freedom will be enough. Will they be forced to promise them postage stamp size bits of the mummified skin of the CBC? I shudder to imagine. ;) On a more serious note... this financing problem could also be considered as yet another reason for a merger of the progressive parties. Because fishing for votes AND money in the same pond is another recipe for disaster...

hi anonymous...I can still find no evidence that Harper founded the Northern Foundation party, but I agree with you on just about everything else.
Although I don't dare ask you what a p.i.t.a. is, because I have a low enough opinion of him as it is... ;)

hi e.a.f....I don't consider Harper to be a real Christian. For although I'm an atheist because I believe our heaven and hell are right here on earth, I was raised with Christian values by my REAL Christian mum, and cruelty and greed aren't part of them.
I believe in being my brother and sister's keeper, I am against violence and war, I share some of my humble wages with the poor and the homeless, and I would even be willing to forgive Stephen Harper if he repented of his many cruelties, and became a force for good.
But I'm not holding my breath... ;)

@ Rev Effects, according to the head evangelical advising Harper on this new "office", Christians are the most persecuted religious group in the world. As for Muslims, they need to be freed from their stone age customs for their own good. We are on a course for justifying military intervention on "humanitarian = religious freedom" grounds.

hi O.B.... thanks for explaining p.i.t.a. to me. Duh. I must have been very sleepy or very hungry, because I couldn't get the image of Harper as a souvlaki out of my head... ;)

pita LOL (souvlaki image) Thank you for that !