Is Tony Clement Planning to Resign? 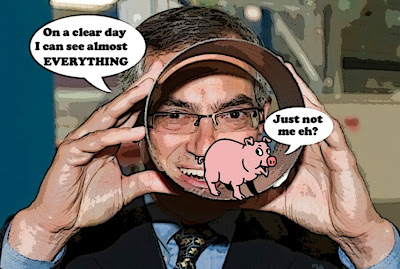 Oh no. It seems that Tony Clement's view of reality may once again be somewhat limited.

A senior federal bureaucrat has contradicted Tony Clement’s insistence that he was not involved in dividing a $50-million fund to spruce up his riding before the 2010 G8 summit.

Which of course is NOT what Tony-o told the Public Accounts Committee:

“That’s just a myth,” he told the committee. “It never happened that way. We were not involved in selecting these projects.”

And for good reason eh?

“If I was the decision-maker, if I had set up a parallel process and created a situation where the auditor general did not know – that’s their (opposition MPs’) accusation – I’d be resigning right now and turning myself in to the local police office,” Mr. Clement said.

What I'm saying is what EVERYBODY knows. The Cons bought themselves an election with OUR money.

They are the most corrupt government in Canadian history and sooner or later they ARE going to pay for it.... 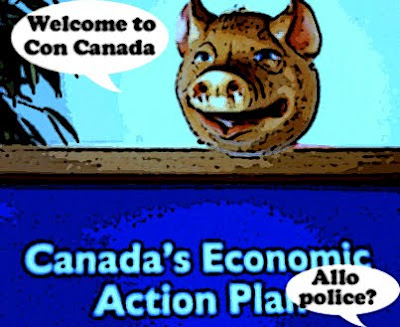 As if we would believe anything the Conservatives have to say.

Has everyone noticed, all the bad weather warnings. The hurricane force winds, the 40 to 50 foot waves, along the channel? And Harper is stupid enough to bring in, the dirty oil tankers from China? The channel narrow, the tankers massive, trying to make the hairpin turns. It's difficult to navigate in good weather. In bad weather, forget it.

The best service Harper and his Conservatives could do is, get the hell out of Canada. We don't like dictatorships in this country. We fought in WW11, so we wouldn't have fascism and dictatorship in Canada. Harper is the most despicable, rotten excuse for a P.M. in the recorded history of Canada.

A nationally elected government is not a dictatorship. It is ignorant to post such nonsense. Your readers probably aren't smart enough to find the polls.

when a party and leader that 40% or less of the country voted for gets to ram any bill they want down our throats due to outnumbering the opposition so significantly, and 60% of the country doesn't have any real recourse... it may not technically be a dictatorship but it's effectually the same thing for most of us.