In Praise of the National Film Board 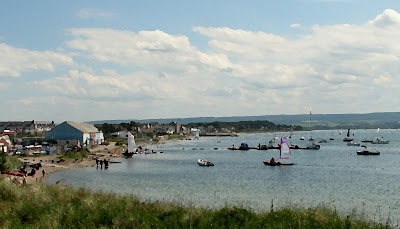 When I was a young boy living in a Scottish village that didn't have a movie theatre, one of my teachers used to thrill me and the other kids, by hauling out an ancient projector and playing an educational movie.

And many of those movies were made by the National Film Board of Canada. I can't remember what they were about, except that it was always a magical moment. So I've been a fan of the NFB ever since.

In the mid-nineties I was horrified when the Liberals slashed its budget by about thirty percent. Every year its budget gets smaller and smaller. And I shudder to think what the Cons might do to it now that they have a majority.

Because it's a Canadian treasure.

As more evidence of that I offer up one of its latest little gems. It's called Wild Life. It tells the story of a young Englishman who sets out for Alberta in 1909, hoping to become a successful rancher.

Only to find out it was harder than he thought....

Yup. Please don't let the Cons destroy the NFB, like they are planning to destroy the CBC.

Because it's still making magic for me.

And it really is a Canadian treasure...

I love the NFB, I grew up with it too. One of my favourite short films was the one where this guy carves a little toy canoe out of wood and sets it in a snow bank, the rest of the movie shows it's path from a creek to the ocean. It's pretty old, and it's always amazing when I talk to someone who actually remembers it too.

I sometimes listen to an electronic band called 'boards of canada' that actually samples a lot of the old eerie sounds from NFB films. Great nostalgia.

A Canada without the iconic NFB and CBC would be very sad indeed.

Harper and his clan of backwards, ignorant, intellectually and culturally impaired redneck shitkickers are doing their level best to strip Canada and Canadians of any national identity or meaning. Fuck them all to hell

Absolutely agree. The short film posted is a lovely little gem. It likely has little or no commercial value, and would never be made by a mainstream studio, but artistic value cannot be measured in dollars. The emphasis on the bottom line unfortunately often demands a race to the bottom, and creativity is seen as risky or uneconomic.
At school in Ontario in the 50's and 60's, NFB shorts were a welcome treat. Some were pretty standard nature fare; some were frankly experimental, occasionally incomprehensible to a child, and definitely horizon expanding.
I would rather that my taxes went to the NFB to fund unrealized artistic aspirations than to pay for one more cell in a federal prison for unreported crimes.
But then, nobody's asking me...until the next election, possibly.

hi Rev Effect... I love and support all our cultural institutions including the CBC, but none has remained so creative, and so Canadian, as the good old NFB.
It's absolutely criminal that a Canadian institution that has so many admirers all over the world should be treated so shabbily.
And BTW...you do know that "Boards of Canada" is a Scottish group ? :)
And they love the NFB for the same reasons I do...

hi ThinkingManNeil...I absolutely love animation, so there are so many great hits to choose from. But yeah "The Cat Came Back" is a classic.
And the good news is that in recent years the NFB has started putting a lot of those classics online so more people can enjoy them. I cannot imagine a more refreshing and Canadian antidote to the alien poison of the Harper Cons...

hi dfra...yes it's a lovely little video isn't it? It's both funny and sad, it reflects our magnificent landscape in such a moody and magnificent way. And it tells the story of an all too common and tragic immigrant experience in such a simple but powerful way.
And it's not only its own creations that are such a treasure. It has also inspired animators all over the world, and made it a more wondrous place.
So much for so little, it's a bargain I tell you...