My Horrible Afternoon With Margaret Thatcher 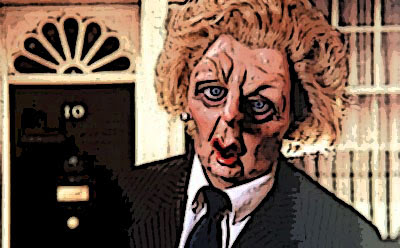 Gawd. I made a terrible mistake today. I allowed my Dad to drag me off to see the Margaret Thatcher movie The Iron Lady.

And all I can say is I'm glad he paid for the tickets, because it was absolutely hideous.

Any reasonably aware audience will feel exhausted and discomfited after two hours of this exercise in cinematic navel-gazing. Thatcherism cast a long shadow, and The Iron Lady, in its ever-so-watchable way, does little to illuminate it. Quite the contrary; much like last year’s Nicolas Sarkozy biopic La Conquête, it’s a subtle form of propaganda, asking the audience to see the beauty in the beast.

Well, even if my leftie student days are long over, I can’t abide hypocrisy. I left the theatre mumbling Billy Bragg’s advice in the Thatcher-era song It Says Here: “When you wake to the fact that your paper is Tory, just remember, there are two sides to every story.”

But even that review isn't harsh enough, because the movie totally fails to reflect the pain that Con beast inflicted on the poor in Britain. Declaring that "there is no such thing as society" while mothers and children chanted "Thatcher Thatcher Milk Snatcher."

Or totally ignores the terrible damage she did to a generation of gay kids with her fascist Section 28.

And of course,  all through that unbearably long movie, I couldn't forget that Stephen Harper is her true spiritual successor... 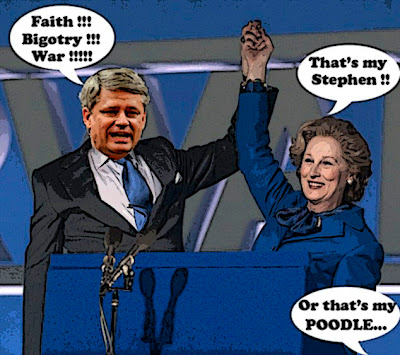 So needless to say eh?

I prefer this review.

Against the oncoming flood of propaganda, lies, distortions and Orwellian changing of the past, the space for the truth will be remarkably small. But there will still be a space. So let’s start filling it now and remind ourselves of the true legacy of the most pitiless, inhumane, greedy, venal and megalomaniacal creature ever to cross the threshold of 10 Downing Street:

I would consider this a fitting tribute:

In conclusion, then, the best way I think we can mark her passing with dignity and without conceding the moral high ground to the enemy by gloating and cheering, comes from a friend of mine; we should line the streets along which her funeral cortege passes and simply turn our backs in silence as it trundles by.

One by one, each of us, in silence, as she passes turn our backs and say that on this, the hour of her death, now is the time to start living again. To rebuild the shattered, violent land she has left by placing people before profit. By tossing into the dustbin of history all her hate-filled bile. The best way to deal with Thatcher’s legacy is to destroy it.

And if anyone still wants to see a movie about that unrepentant old monster, this video is remarkably similar.

Finally, I feel I should add that I derive absolutely no satisfaction from knowing that she is now suffering from dementia. For I would not wish that even on my worst enemy.

But as Elvis Costello once wrote:

"When they finally put you in the ground, I'll stand on your grave and tramp the dirt down. "

Sometimes historical figures are better off forgotten. Thatcher's one of them.

Thatcher's in the same league as Richard Nixon and both are best left alone and forgotten.

I remember her being described as Attila the Hen.

The Spitting Image program on TV had her done perfectly. It would be a treat to see some of those episodes.

Her dementia is a sad thing and nobody should have to undergo that ordeal. Perhaps it's a blessing that she can't comprehend what has happened to both her children and their sad situations.