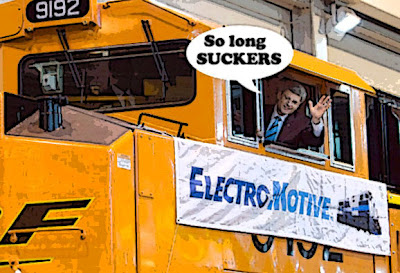 Well I see that Great Choo Choo Leader is trying to put some distance between him and the lockout at the Electro-Motive plant in London, Ontario.

Even though he once used the factory to shill his corporate tax cuts.

"This is a dispute between a private company and the union and we don't comment on the actions of private companies," Harper spokesman Carl Vallee responded Wednesday in an email.

The prime minister showed no such reticence on Mar. 19, 2008 when he visited the Electro-Motive plant to showcase a $5 million federal tax break for buyers of the diesel locomotive-maker's wares and a wider $1 billion tax break on industrial capital investment.

Now I can understand why Stephen Harper is running away from those job-killing tax breaks. Because it must be so embarrassing to be exposed as a total fraud. And he's such a miserable coward.

But why is he refusing to stand up for Canadian workers who are being treated like animals by an American company? Why does he hate Canada soooooo much?

Answer: because Caterpillar is Harper's kind of company.

Even Wal-Mart Stores Inc. can’t match Caterpillar’s resolve in dictating terms to its workers. The firm has a practiced skill at “taking a strike” for as long as required until workers straggle back to work across their own picket lines.

And on a single day in 2009, Caterpillar blithely laid off 11,000 employees, or 9 per cent of its global workforce. Like most U.S. employers, Cat has a hair-trigger for layoffs at the first sign of tough times.

And he's just as ruthless and as shameless as they are. Which makes Ray Vella's warning even more important.

"There's a lot at stake here," said Vella, a 23-year veteran. "This is not just us against them; this is for all workers across Canada. Because, if they can do this here, you're next."

Fight the Cons. Support our union movement. Stand up for Canadians. Tell the Caterpillar pigs to take a hike eh?

Or wake up one day, with the taste of cat food in your mouth, and despair in your eyes. In a country you don't recognize.

And the good news? Harper's little Choo Choo is running all over the main plank in his economic platform. And if we plaster his face all over this brutal lockout.

We can do the Cons some serious damage... 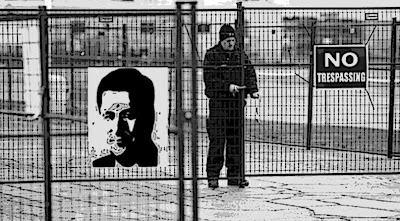 What the hell was Air Canada?

Murphy! All those skilled workers are about to have their wages slashed by half, if not lose their livelihood altogether. I wonder if it occurs to Harper that those workers with their union jobs pay nice fat taxes and then even have money to spend on stuff, thereby paying more taxes.
Once no one has any money, who will buy the stuff that is made offshore by people who are also not really paid? It seems to me there are going to be a lot of idle hungry people in pretty short order. I wonder how fast he can get those prisons built?

What are we going to do about this?

Total bullshit on the staying out of the fray. He knows that this stinks to high heaven and to come "on board" on the side of Caterpillar would look criminal as compared to his tactics with Air Canada (although that too was criminal as far as I'm concerned).

I heard the tail end of a financial report bemoaning how bad consumer spending has been and will continue to be. Buy a clue you asshat experts at BMO Financial et al. When you kill wages and jobs, you kill consumer spending. A percentage drop in the GST does nothing to promote spending when there is income insecurity, plus it is a drain on federal reserves. But then again, so is loss of income tax with the loss of decent wages.

And Steve "the Economist" thinks this is sound fiscal management. Arghhhhh.

hi karen...I couldn't agree with you more. I can't believe how an American company dares treat Canadians like they treat people in Third World countries. And of course by going after unions and benefits they are only hurting our economy, and sending us all on a race to the bottom.
As to what are going to do about it... I'm going to support those locked out union members as much as I can. Because as that locked out worker said, if those greedy companies can get away with it, we'll be next...

hi Beijing...with the private sector failing to create jobs, and laying off or locking out workers left and right. And with the Cons and Rob Ford planning to lay off thousands and thousands of public sector workers, we'll be into a double dip recession before we know it. They are putting ideology before economic good sense, and the whole country will pay the price...

Fuck is clearly the word of the day.

This is more than just a recession. This is about a permanent downward slide for working Canadians. The new normal. These are permanent loses in a war Canadians are losing.

Here we have a profitable company getting benefits from governments in the form of tax cuts/credits. Not only that, they tapped into some of the $7.7 trillion the US Fed handed out interest free to financial institutions circa 2008 and early 2009 http://www.bloomberg.com/news/2011-11-28/secret-fed-loans-undisclosed-to-congress-gave-banks-13-billion-in-income.html

Despite receiving such generosity from citizens, they return the favour by putting the boots to their employees, demanding massive cuts to benefits and reducing wages for a high end manufacturing gig to a few bucks over minimum wage.

And they get what they want. They only bought the place to close down a competitor and keep the parts. This wage demand was just a last "Make it worth our while and we'll stay open for a couple years" offer. And the worse part is, nobody is going to lift a finger to stop Cat. They won't even demand the money the gave them back.

What we are seeing is the future. Minimum wage is increasingly becoming the new standard. Meanwhile, corporations will roll in the profit, (often government subsidized profit) for the benefit of the 1% and their cohorts.