If You Love the Internet... 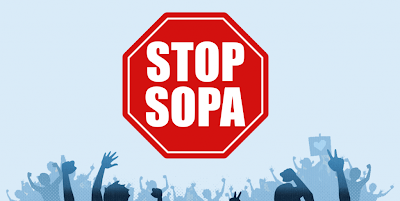 Various people have posted info on how to get Wikipedia today, such as hit cancel before the overlay appears, or disabling javascript.

It is indeed fitting that such an activity would be illegal under the "circumventing digital locks" provisions of this law.

An analogy I read today said that if this law was applied to banks, if someone put counterfeit money in their safety deposit box, the entire bank, and all its branches, and all its ATMs could be shutdown, and it would be denied all connections to the cheque clearing system and bank of international settlements.

hi liberal supporter...I must say I never realized how dependent I was on Wikipedia until the blackout happened.
And I like your analogy a lot. The best one I read was that if someone downloaded a Michael Jackson song illegally, under SOPA/PIPA they could get more jail time than the doctor who killed him.
I understand that artists need some protection, but this is throwing out the baby with the bath water...