Ezra Levant and the Banana Drama 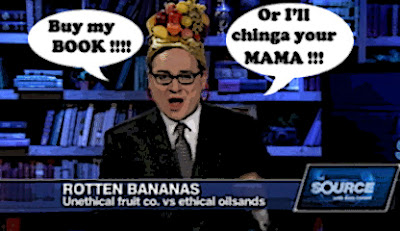 The epithet, widely used in Mexico but not in the rest of the Spanish-speaking world, means, crudely, to have carnal relations with your mother.

Now look I understand that "chinga tu madre" along with "otra cerveza por favor" are the only Spanish words most redneck hosers ever learn at a cheap resort in Mexico.

I also understand why Ezra would welcome ANY chance to flog the title of his "Ethical Oil" book. Over and over again. Even though its premise is hideously flawed.

The whole notion of ethical oil sets up a false dilemma because the very viscous Canadian crude needs to be cut with lighter oils from places like Saudi Arabia in order to be transported down a pipeline, says Chris MacDonald, a visiting scholar for the Clarkson Centre for Business Ethics at the University of Toronto. "So what's the point of having ethical oil if you are mixing it with this 'conflict oil'?"

Because SOMEBODY has gotta buy it eh?

I also realize that this story must have made that ridiculous oil pimp throw up into his cowboy hat fruity bonnet.

"Despite its boosters' advertising, this project is not about jobs or energy security. It is about money. And whenever my former employer Bechtel, working on behalf of TransCanada, had to choose between safety and saving money, they chose to save money," Klink wrote, adding that he witnessed the use of "cheap foreign steel that cracked when workers tried to weld it, foundations for pump stations that you would never consider using in your own home, fudged safety tests" and a surplus of other seemingly unethical safety hazards.

Because what good is "ethical oil" ..... if unethical safety standards" can KILL you?

But can the Star headline really be true? Did Ezra really tell the Chiquita exec to take HIS banana and shove it?

Because needless to say Chiquita is not amused... 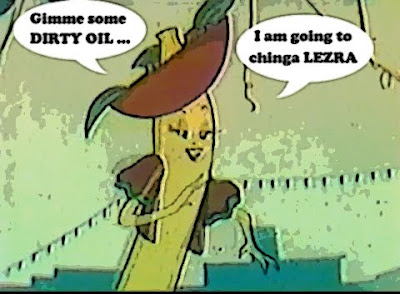 And that could be UGLY.

Because judging from Ezra's tiny pudgy fingers, her banana is bigger than his.

But seriously eh? I'm willing to have a reasonable debate over Dirty Oil. Discuss ways to limit the damage, and save jobs. But let's keep it CLEAN.

Because I realize that Chiquita is also ethically challenged, but Ezra is doing nobody any favours by being so CRUDE.

And every time he goes bananas.

I get a craving for one of these...

Is Ezra Levant a drama queen or just a queen? Just asking.

I recently read an article at rabble.ca that mentioned how things are not all peachy at SunTV, with a recent 69% drop in profit and plans to possibly cut 400 more jobs. Seems their "angry white man" schtick is already getting old. I predict they become an infomercial channel within the next 5 years.

I haven't bought bananas for a while. But they are starting to look real good again. Anything that Ezra hates with a passion must have some benefit for society.

The opposite is also true ... if it is carcinogenic Levant is making a pay day "lobbying" for it.

hi Torontonian...I must confess I don't know, and I don't dare ask. But one thing is for sure his rotten little program is one big drag show. I don't know whether he's crazy or just desperate. But either one will do... ;)

hi Rev Effect...well the network was set up for the sole purpose of trying to destroy the CBC, and give Quebecor almost total control of the airwaves in Quebec. But I can't believe that anyone with an IQ higher than a plant could become a regular viewer, so I'm hoping it will bring down the Quebecor empire instead. And yes, an infomercial channel is probably its sad fate. Ezra and the gang peddling old fashion egg beaters. Golly. I think might even watch that... ;)

hi Sue She Said...for some reason I can't find a Chiquita banana anywhere in my neighbourhood. But if Ezra keeps yapping away about them, and embarrassing us in the eyes of the world, if I have to travel all the way to Rio to buy one, I definitely will... :)