The Oil Pimp and the Dalai Lama 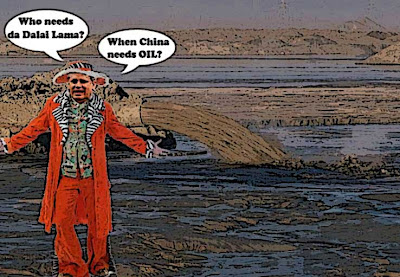 He's always been an oil pimp, but I thought I better give him a new costume eh?

Because these days that's ALL he ever talks about.

"When you look at the Iranians threatening to block the Strait of Hormuz, I think that just illustrates how critical it is that supply for the United States be North American," he said.

When in fact the Iranians can't block the Strait of Hormuz, Americans only want our dirty oil so they can ship it to China. And the Enbridge pipeline is all about giving China our raw bitumen just like they took our forests.

Now you know why more than 70 B.C. wood mills have been shuttered, and it will help to know that Beijing won’t even allow us to turn those logs into woodchips. Meanwhile, you’re being asked to boycott bananas, because Chiquita has said unflattering things about the oil sands.

And because the Chinese are now our best friends forever, so much for any serious economic or environmental review. So much for the Dalai Lama.

As Harper prepares for his second state visit to China in mid-February to discuss oil exports and greater economic ties, it can be assumed his government has moved beyond its enthrallment with the Tibetan spiritual leader in its early days in power.

In the news release last week to announce his trip to China, Harper did not mention humanity or human rights but was effusive about improving the relationship with China forward "by focusing on deepening economic ties."

For daring to oppose the Keystone pipeline in the name of humanity.

So much for human rights. So much for the Office of Religious Freedom... 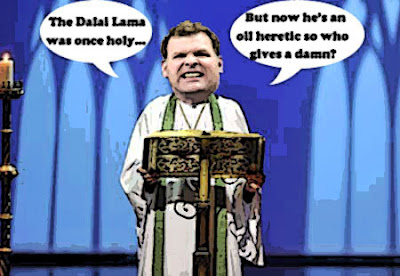 So much for our energy security.

The proposed $5.5-billion Northern Gateway Pipeline will jeopardize Canada’s long-term energy security while at the same time leading to an unprecedented expansion of the oil sands with its dangerous social and environmental impacts, a former senior federal government geologist says.

So much for a pipeline we don't need. And of course so much for the pristine coast of beautiful British Columbia.

Oil tankers will have to navigate about 160 kilometres through narrow channels to get to the Kitimat oil depot.

You know a few years ago I spent a wonderful afternoon with my buddy Seb surfing the wild waters off a massive beach near Tofino.

But in a few years I expect it will look quite different...

Listen live to the Enbridge hearings, links are available at this web site, spread the webcast links around, we need every Canadian listening

Hey Simon, not only do we ship our raw logs in BC to China, but we have dismantled and shipped some of our mills as well.

I had a friend who worked at a Vancouver paper mill many years ago. At least one of the paper machines was dismantled and sold to China. The workers in that mill had to watch as other workers removed it. The 63 people who worked the various shifts on that machine lost their jobs.

If I am not mistaken, this is not altogether an oddity in Canadian manufacturing. I think quite a bit of our textile and steel manufacturing has been offshored, too.

Apparently we do not have the capacity to refine the bitumen here, but surely we have the technology to be able to build such a refinery?

Of course we ship everything to China and then have to buy it back. It makes money for the corporations and politicians.

We have only to look at the widening wealth gap in our country. The better paying jobs left the country and are being done by workers who have no rights and make starvations wages. Works for the politicians and the corporations, just not for us.

I don't know what the "oil Pimp" is getting out of it but I do expect to see him hired by an oil company when he retires from politics.

Harper said we wouldn't recognize Canada, once he was elected to his majority. I am sure we won't. It will be covered in bitumen oil, animals dead, land unuseable, etc. People won't have adequate health care because funding was cut back, so we will be a very sick lot.

We will have a thriving prison industry as they do in the USA. With his criminal crime bill he will criminalize a whole new segment of society. The Americans did a nice job of it. They have 2 Million in jail. who runs the jails? The private corporations. When some states implemented anti immigration laws, what it did was provide more profits for private jail companies. Looks like "oil pimp" might also be working for the "jail pimps"

"Oil Pimp" doesn't want us to be the National Park of north america, well I do. Its one of the reasons we live here. we love the national park look. If Harper doesn't like it he can go live somewhere the oil companies have ruined the enviornment like in the gulf of mexico or the Kalamazu River, etc. Oh, ya if he thinks China should have all our bitamen oil, he can go live next to their refineries.

If Harper can't appreciate our national park look, he can get out.

hi Grant...thanks for the link. I can hardly wait to see the Chinese Communist Party posing as an Alberta interest... ;)

hi Karen...I knew the logging industry in BC was going through hard times, but I must admit I was shocked to see how bad things are. And your story about how those workers had to watch that paper machine being dismantled made my blood boil. And yes it's happening all over the country as the Harper Cons turn us into hewers and drawers of raw materials, and let our manufacturing industries, and the good paying jobs they used to provide go down the drain. It reminds me of a sign I saw one of the locked out workers at Electro-Motive holding up. "Making things is important."
But don't tell that to the sellout Cons because they couldn't give a damn...

hi e.a.f....well said. I completely agree with you. By exporting good jobs, and trying to turn us into a low wage economy, the Harper Cons are setting us up for a very bleak future. But as you point out Harper doesn't care, because when his time in politics is over Big oil will take care of him for being their most slavish servant.
The good news? Once Canadians start realizing what's really happening, and whose interests Harper is really serving, it WILL come back to haunt him...