Scottish Independence and My Lost Canada 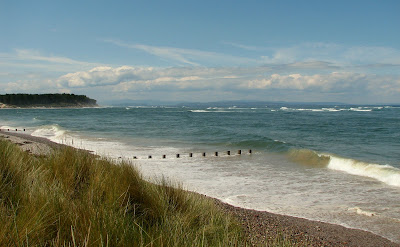 When I was a small boy I used to lie on these dunes near my small Scottish town, stare up at the sky, dream about a place called Canada. And wonder whether there would be bears in Montreal.

These days I find myself thinking a lot about Scotland, and what that country's First Minister likes to say: there are now more pandas in Scotland that there are Con MPs.

Because if Jeffrey Simpson is looking for a clear reason for Scottish independence.

That's the best one I know.

And if more Scots are joining the independence movement, it's because they don't want to live in a country with Con values. The SNP has promised them an independent Scotland would be a "progressive beacon."

And it seems to be working.

Of course, and Jeffrey Simpson could never understand this, it's also about myths, and mountains, and a thousand years of RESISTANCE.

A spirit of resistance that I'm sad to say is lacking in Canada, as Stephen Harper's sinister Con regime claws our values apart. Turns us into a reactionary prison state.

And progressives can't even unite to fight the common enemy.

Will Canadians finally rise to the occasion and defeat the Harper Cons?

What I do know is some people are born to be slaves. And can live in a country with Con values.

And I'm betting they won't either...

So what would I think if I was back on that beach tomorrow?

Hope is a beacon.

It is not far off the mark to say Canada was a Scots, and not English, colony. As such, we benefited from the things the Scots pioneered such as a good public education and public health system.

A shame to let the hard won efforts of a Scots born Canadian, Tommy Douglas, disappear to the Cons.

Isn't it true, that Scotland sent people to re-settle in all parts of the globe

for the purpose of ensuring that an awful lot of us toe the Scottish line. I always thought so.

So -- maybe not in Montreal -- but in many parts of Canada have Scottish characteristics. Are the bagpipe schools empty? No. Are the highland dance schools vacant? Noooo. As for those Tatoos ... !

I wouldn't change my Canadian citizenship for anything, but I do like a little tint of Scottish. So I say: Fear not.

hi Northen Eye...yes I just wish we could do what the Scots have done, drive the Cons out of the country, and become a progressive nation again.

hi BC Mary...maybe I was a bit harsh, I do think we can still beat the Cons in Canada, if we join forces to defeat the common enemy. And no I'm not going back to Scotland. But I made this video, which was shot by Seb, to show me and my posse marching in my hometown's highland games. Aaaaargh. Vive le Canada. Scotland forever !!! ;)

Saw this and your post came to mind right away.

These pics were taken to celebrate Scotland, by people the world over.

hi sassy...thanks for the great pictures,and for introducing me to the Scottish tribal group Clanadonia
who provide the music because they are really wild. Of course, when I recovered from my epileptic fit and realized they had included every Scottish person in the world except me, I was really annoyed... ;)

Please - don't ever lose your sense of humor :)

hi sassy...don't worry I'm holding on to it with both hands. It has helped carry me through some tough times before, and I've made it quite clear, I'm counting on it big time to get me through this one... :)

As a Scot myself.From Glasgow now Isle of Bute.i never thought i would ever see a Scottish Parliament reformed,nevermind a majoroty nationalist govt.wHILE MR Salmond was doing his homework the unionists laughed at him from sidelines .They arent laughing now.They brought in mr cameron and he has twice wrapped himself in a union flag with his pro uk speeches,and made the fatal mistake of not really talking up Scotland within the union.The nationalists have stretch support even across once unionists Glasgow and the city council is about to fall to snp in local elections.so theres something happening in Scotland that i never thought i would see.And independence is gathering pace .Either way the nationalists are in a win win situation.