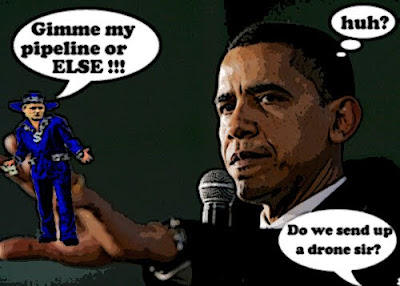 Oh dear. I see that Stephen Harper's pathetic attempt to threaten Obama has been met with a chuckle and a shrug.

The Obama administration is unfazed by Canadian warnings that delays in the Keystone XL pipeline review will add urgency to Ottawa’s effort to ship crude oil to China, U.S. Ambassador David Jacobson says.

And no wonder eh? When Harper is only helping Obama's enemies.

And like our homegrown oil pimps, the bonehead Boehner doesn't know what he's doing or talking about. It's his fault for playing cheap politics. And that oil isn't going to America, it's going to China.

Even though on his first day as Opposition Leader, Harper once had a very different view about how to work with the Americans.

The new opposition leader wrapped up his argument, the first he wanted to make on the subject he had selected in his parliamentary debut as a national party leader: “We will be unable to get the U.S. administration on board unless whoever is in the White House and leading members of congress value and respect what our Prime Minister brings to the table.”

Oh well. Leave it up to the New York Times to put the bigger issue into perspective.

Far more important to the nation’s energy and environmental future is the development of renewable and alternative energy sources. This is the winning case that Mr. Obama should make to voters in rejecting the Republicans’ craven indulgence of Big Oil.

And leave it up to Obama to REALLY humiliate Harper when he doesn't have to worry about being re-elected.

Which no doubt accounts for the fact that when Stephen Harper said he was "profoundly disappointed."

The horrible sounds coming out of the PMO sounded more like this...

Memo from Great Leader: The re-enactment of the War of 1812 will now feature LIVE ammunition and REAL Americans.

Because NOBODY but NOBODY humiliates Stephen Harper !!!!!!!

Oh really Great Leader? Never was Canada made to look so bad.

And never was a Prime Minister so ridiculous....

Obama said. I am greatly reducing the U.S. military. Canada has to pick up the slack. WHAT!!!

Meanwhile, the U.S. has sanctions on Iran. Sanctions against three oil corporations, for dealing with Iran. China angry at the U.S. Russia saying, an attack on Iran would be unwise.

Then, Harper is opening his big mouth, saying Iran is building WMD. Is that the same as, Iraq building WMD?

Oh well, perhaps Harper will find, the dirty tar oil will be sanctioned. Harper will have, China, the Arab country's and Russia, all angry with him, if he attacks Iran.

Harper also attacked Syria, without a declaration of war. Luis Moreno-Decampo, is investigating Harper, for war crimes and crimes against humanity. The Geneva convention, may have been breached.

There is still the question, of Harper's part in the torture of the detainee's.

Harper wasn't exactly a hit in Durban, at the meeting for climate change. He was trying to bully country's, into accepting the dirty tar oil. Harper has about, run Canada out of friends.

Why is Canada obligated to fight wars, the U.S. starts? We prefer Canada in the role, of a peacekeeping Nation.