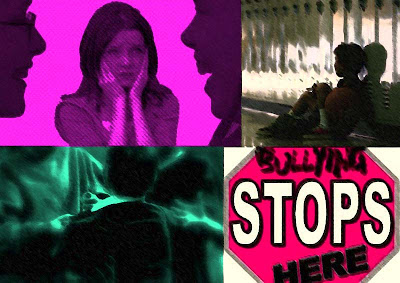 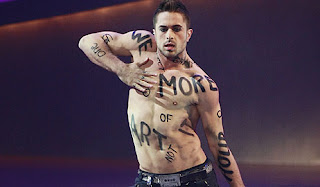 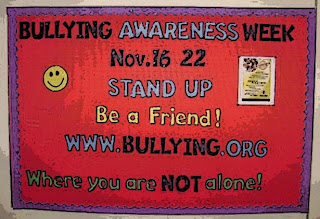 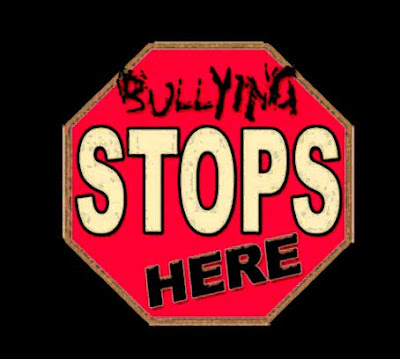 The Geek In Question said...

As a former victim of bullying who continues to feel its effects many years later, I applaud your attempt to give voice to the issue.
That said, it might be wise to check your sources regarding the rationale behind funding for initiatives like PrevNet: there are several erroneous assumptions being made here.

I was walking with my kids in the rain when a guy came charging at us accusing one of my kids with scratching his van (with her umbrella), which was parked illegally half on the sidewalk. My kids were then about 5 and 8 years old. At the time I was thinking, whatever I do here is for my kids, to protect them but also to model for them. I turned to him and answered calmly, but in reply he swore at me, calling me all the foul epithets that a man can call a woman. At first I said these are kids, what kind of language are you using in front of them? But that led to more of the same. I had the kids behind me, thinking this is escalating, what do I do? Turn around? But I put my hand up and said, "Stop," in a loud firm voice over and over. He started to back away, but better yet, a youngish guy who was coming up the street stopped and stood with me. Honestly I don't remember if he said anything. But the fact that I wasn't alone with my kids in front of this bully meant all the world. The foul mouthed man went away and I went on my way with my kids.

This is such a difficult issue. I live in Massachusetts where a young man (eighth grade or so) recently hung himself after relentless gay-oriented teasing. Now the State Legislature is about to vote on a bill that would address bullying in a far more significant way than the schools do now. It's about time the adults started to take care of these kids whose school days are living hell.

Bullying.org is pleased to announce that the seventh annual Bullying Awareness Week will take place from November 15th – 21st, 2009. The theme will be “Stand Up to Bullying!”

“I cannot believe how much this grassroots, community-based movement has grown over the past seven years”, says Bill Belsey who is President of Bullying.org and the original founder of the annual event.

“Over the years, we have gratefully received support from businesses like Family Channel and organizations like the Canadian Teachers’ Federation, the CBC’s Rick Mercer and the City of Toronto”, acknowledges Belsey.

“It is very gratifying to know that this simple, but powerful idea has grown to now involve schools and communities around the world”, observes the father and classroom teacher from Cochrane, Alberta.

“Some people say that by talking about bullying it will just make things worse, but the world’s leading researchers say that you must name the problem and discuss it in order to prevent it. The whole idea of the week is to prevent bullying through education and raising awareness in a positive, proactive way. For far too long society has seen bullying as a ‘rite of passage’ or a ‘normal” part of life. Being scared to go to school, being full of anxiety because of a harassing boss or co-workers, or thinking of hurting yourself or others because of bullying is not normal”, notes Belsey.

“I would like to invite all schools and communities to join this annual grassroots initiative, because bullying is not simply a school issue, it is a broader community health and wellness issue”, encourages Belsey.

For more information, go to http://www.bullyingawarenessweek.org.

-bullying occurs in school playgrounds every 7 minutes and once every 25 minutes in class (Pepler et al., 1997).

-only one in four children report that teachers intervene in bullying situations, while seven in ten teachers believe they always intervene most bullying occurs close to adults.

-bullying is reduced in a school if the principal is committed to reducing bullying. -(Charach et al., 1995)

-bullying stops in less than 10 seconds, most of the time when peers intervene on behalf of the victim. -(Pepler et al., 1997)

Note: Bill Belsey is the founder and President of Bullying.org*. He is the creator of http://www.bullying.org, the world's most-visited and referenced Website about bullying, http://www.cyberbullying.ca, the worlds' first Website about cyberbullying, the annual Bullying Awareness Week, see http://www.bullyingawarenessweek.org and http://www.bullyingcourse.com, which offers online courses and Webinars for parents, educators and concerned citizens about the issues of bullying and cyberbullying. Mr. Belsey is a father of two teenage children and currently teaches grade five at Springbank Middle School for Rockyview School Division in the foothills of the Rocky Mountains, see http://www.coolclass.ca “Canada’s Coolest Class!” He is a winner of the Prime Minister’s Award for Teaching Excellence and a Fellow of the prestigious World Technology Network.

hi PhD4me...listen I have an open mind. If there are reasons for not funding it I'd really like to hear them. As I said in my post, it seems like a great organization and we need all the resources we can muster to fight this horrible problem.

hi lilian...what a nice story. It's so important for people to stand up for others and not look the other way. Teachers and other adults can and must do more to try to eliminate bullying. But nothing is more effective than peer pressure.And I'm glad to say there have been some excellent examples of that in Canada, with students putting on pink shirts and doing other things to draw attention to the problem. The future is promising but the present is still hard for too many...

hi Ken...what a sad story and a far too common one. Unfortunately it takes stories like that one to get some action. I never will understand why people don't realize that if you want to build a safer community you have to tackle bullying and violence before it becomes everyone's problem.
But as I said we are making progress it's just far too slow...

hi anonymous...thank you for that. I'm aware of Bill Belsey's work, and we all owe him a lot for coming up with the idea for Bullying Awareness Week. If only we could clone him... ;)